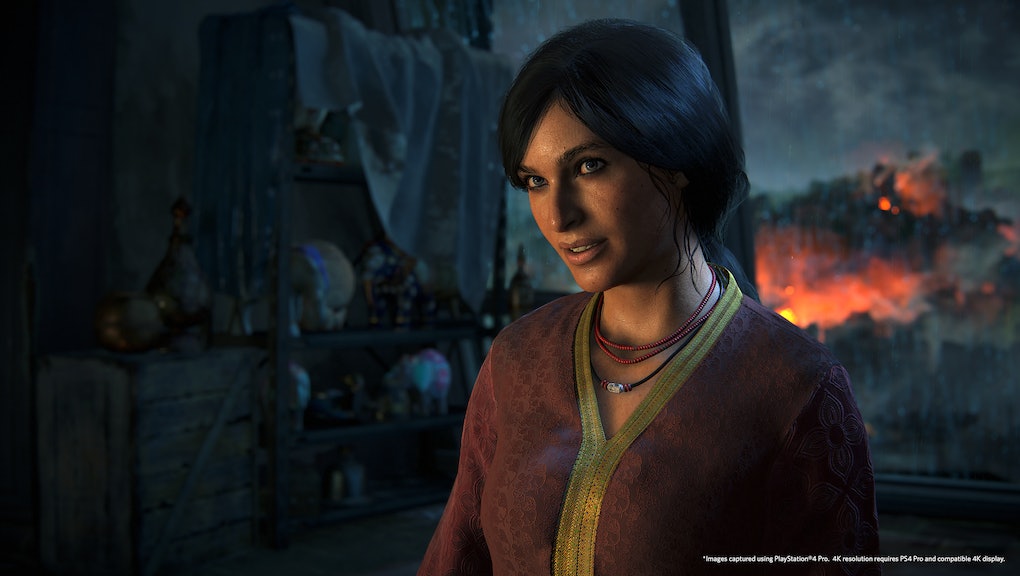 ‘Uncharted: The Lost Legacy’ feels like ‘Indiana Jones’ — but with badass heroines

The easiest way to describe the Uncharted franchise to the uninitiated is: “It’s like a video game version of Indiana Jones.” That basic comparison holds true for the series’ newest self-contained story, The Lost Legacy — but instead of playing as the equivalent of Indy, you’re playing the femme fatales who betray him in the second act, leaving him strapped to a tree with his pants around his ankles.

In Uncharted, it means that instead of playing longtime series protagonist Nathan Drake, you’re playing Chloe Frazer, a fellow treasure hunter who first appeared in Uncharted 2. It also stars Nadine Ross — though she isn’t playable — as the leader of the mercenary band hired by Uncharted 4’s slimy villain, Rafe Adler.

The Lost Legacy won’t be available on PS4 until Aug. 22, but Mic recently attended an hour-long hands-on demo at a Sony event in New York City. Here’s what it was like.

Uncharted: The Lost Legacy seems to feature an increased focus on open-world environments

Let’s start with the good news: For those of you worried this is some kind of miniaturized, cheap version of Uncharted 4, fret not. Just like the expansion for Naughty Dog’s previous game, The Last of Us: Left Behind, Uncharted: The Lost Legacy looks like it’ll deliver a full-fledged standalone experience.

I initially flinched when I heard The Lost Legacy would cost $39.99, but based on what I saw, that doesn’t feel unfair. It won’t be as long as Uncharted 4, but that doesn’t mean you’ll be short on things to do.

To give you an idea of what I saw, I spent the entire hour-long demo in a single open-world environment, the Western Ghats. When the demo started, Chloe and Nadine were discussing a large tower off in the distance, indicating that’s probably where the area’s main quest would start.

As my allotted hour was wrapping up, I realized I hadn’t even gotten to that tower yet. Instead, I was just driving around and exploring the area’s other optional, hidden secrets.

For example, at one point I stumbled across an open field peppered with a loose gathering of stone columns, each of which had a metal disc on top. Eventually, I triggered a mechanism that caused jets of water to shoot out of the top of every disc. When I climbed to the top of a tower and stepped on the metal disc, the jet would close up.

To complete the puzzle, I had to figure out a route — swinging from trees and scurrying up short stone walls — that would allow me to get to the top of every single platform within a pretty short window of time. If you took too long, the whole puzzle would reset.

During the demo, James Cooper, The Lost Legacy’s lead designer, emphasized these more open-world environments — of which there were only a couple in Uncharted 4 — were more of a focus in The Lost Legacy.

At first, that worried me a bit. I’m not alone in feeling fatigued on open-world games, so the idea of wandering around yet another gorgeous map littered with objective markers felt like bad news. Luckily, it seemed like The Lost Legacy managed to strike a good balance. It gave me optional side quests to pursue without making me feel like I was checking tasks off a list of chores.

Additionally, rather than rely on a mini-map, Chloe can pull up a physical paper map that doesn’t really provide a ton of information. That meant I had to actually pay attention to the landscape around me to navigate it successfully. It’s a small detail, but it made a big difference in making me feel like I was actually traveling through a virtual space instead of drawing a straight line between two objective points and charging through at any cost.

Had I actually gotten to the main quest in the Western Ghats, I’m assuming it would have been a much more linear, explosive, decidedly Uncharted-style experience — but I was just as happy to tromp around the wilderness in my SUV, too.

By not playing the good guy, The Lost Legacy lets you have a bit more fun — without all that pesky guilt

If you ever start talking to fans of the Uncharted series, one subject’s bound to come up: Why is Nathan Drake OK with killing hundreds of anonymous henchmen? Why do we consider him a good guy? You’re not likely to arrive at any kind of satisfying answer, but The Lost Legacy has an interesting way of making that question less likely to pop up: Chloe and Nadine aren’t the good guys.

Both characters are known for their constantly shifting allegiances and opportunistic personalities, so it makes a certain amount of sense when they kick competing mercenaries off a cliff. When you’re playing a character who’s a little rougher around the edges and who’s not afraid to double-cross someone, getting into shootouts with hordes of enemies doesn’t feel like it has quite the same amount of baggage.

But that’s not to say these characters are hollow, one-dimensional villains — far from it. As I was driving around, Chloe and Nadine started chatting about various things: Their current whereabouts, the item they’re hunting for, their personal lives and even their opinions on the attractiveness of the game’s villain, Asav.

These contextual conversations were my favorite part of Uncharted 4, and they seem to be just as strong — if not more so — in The Lost Legacy.

In short, The Lost Legacy seems like it smartly iterates on some new, open-world territory and shifts the focus to some compelling new characters. But make no mistake: This is Uncharted, through and through. I look forward to playing more when The Lost Legacy drops Aug. 22 for PS4.