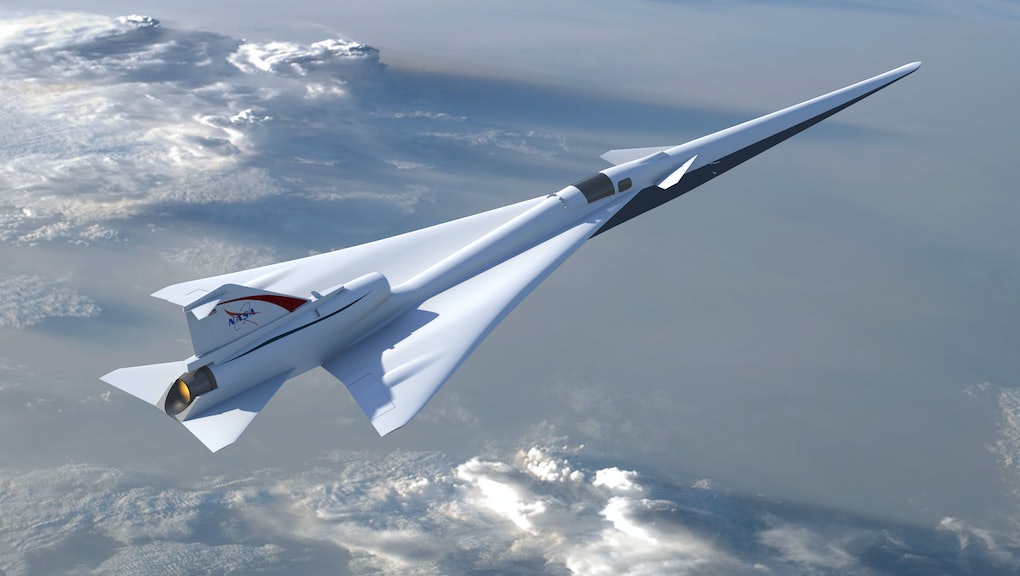 NASA’s working on quieter supersonic flight, which it wants to help commercialize

Between delayed flights, cramped seating and the depressing lack of snacks, airplanes have lost much of their mid-century glamour. But what if you could spend less time on a plane?

How do we do that? Make planes go faster — faster than the speed of sound.

We know how to do this — it’s been 70 years since a pilot first broke the sound barrier. And while it’s harder to go supersonic in large, commercial airplanes than in nimble experimental and military crafts, we’ve actually done that too: Until 2003, British and French airlines offered supersonic Concorde transatlantic flights for a quarter century. (Of course, a ticket cost about $12,000 round-trip and the flights burned an incredible amount of climate change-inducing fuel.)

As the plane’s nose pushes into the air, it flings aside air molecules into waves of high pressure (NASA compares the process to a boat creating a wake). When those waves hit the landscape, they create a loud booming noise and sometimes damage property. That process continues for as long as the airplane remains at speeds faster than sound.

This was an ongoing problem for Concorde flights: The U.S. and Europe both banned supersonic flight over their land. (The popular London-to-New York route only passed the speed of sound over the ocean.) Delightfully, Saudi Arabia blocked the flights for fear booms would upset breeding camels.

But companies are pressuring the Federal Aviation Administration (the agency responsible for the ban) to reconsider. The agency has said it can’t without data.

Because air behaves differently depending on its temperature and humidity, booms sound a little different as weather varies. So NASA is repeating tests it has already run elsewhere in the country with Florida’s wet air. It will carefully position its supersonic flight to be off the coast, with as little civilian land in the path of the boom carpet as possible, but with Kennedy Space Center ready to take measurements of the booms.

NASA is also encouraging companies to explore supersonic technology. In 2016, it hired Lockheed Martin to begin designing a new supersonic plane, aiming for sound at the level NASA calls “a quiet sonic thump.”

That design now exists and is being tested in small-scale models, and later in July NASA will be looking for companies to sign up for building full-scale prototypes, which it hopes to have ready to test in the early 2020s.

The comparatively quiet plane reduces sonic booms by redirecting pressure waves in subtly different directions with small changes to the aircraft’s surface. According to Bloomberg Businessweek, the design lowers the volume of the boom carpet to the level of “background conversation in a busy restaurant.”