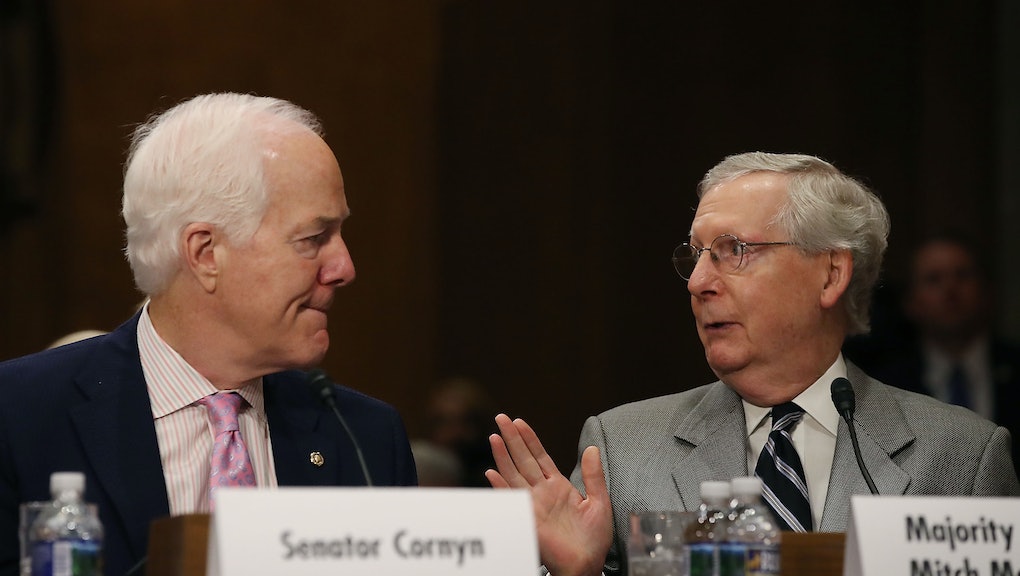 Motions to proceed and vote-a-ramas: Here’s how the health care process will play out

After weeks of false starts, bickering and tinkering with how exactly to make good on their seven-year promise to repeal and replace the Affordable Care Act, Senate Republicans will finally attempt to make good on that vow and vote on health care legislation on Tuesday.

But a lot is up in the air.

In fact, hours before this all goes down, even Republicans don’t know what version of their health care plan can pass — if any at all.

Here’s how the process will play out:

At roughly 2:15 p.m. Eastern, Senate Majority Leader Mitch McConnell will put on the floor something called a “motion to proceed.”

The MTP is a motion that allows the Senate to start debating a bill — in this case it’s the American Health Care Act that House Republicans passed in May. The MTP needs 50 votes to pass, with Vice President Mike Pence serving as the tie breaker.

Since Sen. John McCain (R-Ariz.) says he’ll be back in Washington after his brain cancer diagnosis to vote on the MTP, McConnell can afford to lose two Republican votes and have the MTP pass. If he loses three votes, the MTP fails, and the whole health care vote is over before it really begins.

So far, Sen. Susan Collins (R-Maine) has said she’s a no on the MTP.

It’s unknown how a handful of other moderate Republicans will vote. They include Sens. Shelley Moore Capito of West Virginia, Dean Heller of Nevada, Lisa Murkowski of Alaska and Rob Portman of Ohio. McConnell will have to run the table on all of these moderate members in order for the MTP to continue.

If the MTP passes, then McConnell will set 20 hours of debate, split evenly between Democrats and Republicans.

During this time, Democrats — who are united against the Republican plan — will make speeches in opposition to the legislation. Republicans who support the plan will give speeches in its favor.

The speeches will go through the night and into Wednesday morning. And presumably, McConnell will try and build support for one of the plans Republicans have tossed around.

After debate wraps up on Wednesday, the so-called “vote-a-rama” begins.

It’s at this point that McConnell will offer up the Senate Republican health care plans as an amendment to the existing House-passed AHCA.

The plans currently out there include:

The repeal-only bill: This would repeal the taxes and regulations set by the ACA, better known as Obamacare. The non-partisan Congressional Budget Office says this plan would lead 32 million people to lose their insurance, and make premiums double. It’s extremely unlikely that this amendment would get the 50 votes needed — plus Pence’s vote — to pass.

The Better Care Reconciliation Act This is the Senate Republican plan that slashes Medicaid and repeals other ACA regulations, ultimately leading 22 million people to lose their insurance while raising costs for certain sections of the population. The Senate parliamentarian took a scalpel to the BCRA on Friday, saying that many of the key parts of the bill must either be removed or are subject to a 60-vote threshold. Given that Republicans can barely cobble together 50 votes for the plan, the BCRA would almost certainly fail if those provisions were kept in.

The Cruz amendment: This amendment, drawn up by Sen. Ted Cruz (R-Texas) has yet to be scored by the CBO, and hasn’t been reviewed by the parliamentarian, so it’s unclear whether McConnell can even introduce it. But if he did, the Cruz amendment would allow insurers to sell non-ACA-compliant plans, so long as they sell one ACA-compliant option. Experts say this would basically create high-risk pools, making those with pre-existing conditions pay more for their coverage.

If all three of these amendments fail, the health care reform bill is dead.

If they pass, then Democrats, as well as Republicans, can offer an unlimited amount of other amendments to the bill — every one of which will get a vote and will either pass or fail.

Many of these amendments will be politically perilous, and could lead to ugly attack ads in the 2018 midterm elections.

After every amendment has been offered and voted on, the amended bill then must be voted on for final passage.

That amended bill again needs 50 votes, with Pence serving as a tie breaker.

If the Senate passes an amended version of the House health care bill, the legislation then goes to conference.

The House at that point could decide to just accept the Senate’s changes and move to vote on the bill — which requires 218 votes for passage. Republicans control the House, and can lose 22 of their own members and still pass the legislation.

It’s also possible that both chambers could meld the bill together, taking out portions passed by either side and then voting on that bill. Again that would need 218 votes, as well as another vote in the Senate.

Ultimately, the process is complicated and fraught with peril for Republicans. So many moving parts need to go right for a health care bill to make it to President Donald Trump’s desk and make good on the GOP’s seven-year promise.