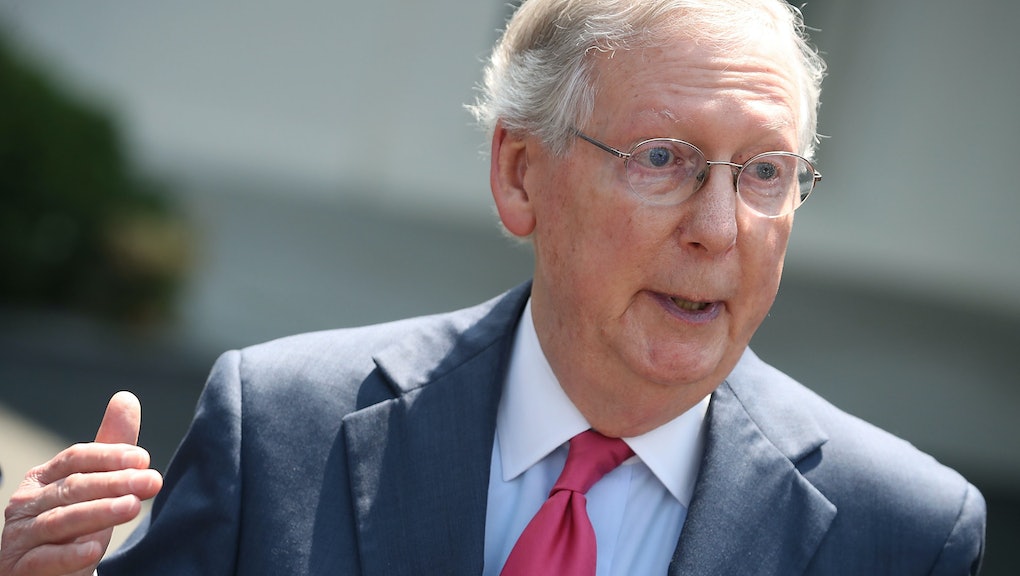 Senate Majority Leader Mitch McConnell raised his widely maligned health care bill from the dead after a Tuesday vote, which opened debate on repealing and replacing the Affordable Care Act.

A total of 50 Republican Senators voted to begin discussions on amending the American Health Care Act the House passed in May. All 48 Democrats, along with two Republican women, Sens. Susan Collins and Lisa Murkowski, voted against the repeal plan. Vice President Mike Pence cast the tie-breaking vote to move forward with debate.

Going into Tuesday’s vote, Senators did not know which version of the bill they’d be voting on, but the latest estimate from the Congressional Budget Office on the revised bill indicated that 22 million people could find themselves uninsured within a decade if the GOP health care plan passed.

“In all of its various forms, this bill is the worst bill for women in a generation,” Dawn Laguens, executive vice president of Planned Parenthood Federation of America, said in a statement. “At every step of the process, this legislation has only gotten worse as Republican leaders have chipped away at women’s health and rights.”

Under both the House and Senate health care plans, women cannot: count on their insurance companies to cover maternity care as an essential health benefit; use tax credits from the federal government to purchase insurance that would help pay for an abortion; rely on Medicaid to subsidize the cost of child birth, as both plans outline extensive cuts to the aid program, meaning either the number of people or number of services it would cover will shrink.

The AHCA would also bar Planned Parenthood, the country’s largest provider of reproductive health services, from receiving federal funding for a full year. Planned Parenthood draws over $500 million from the federal government annually, in the form of Medicaid reimbursements and Title X grants.

The latter never goes toward abortion, paying exclusively for family planning services; the former only subsidizes abortion in the rare instance that a pregnancy results from rape or incest, or when it threatens the life or health of the mother. Otherwise, Medicaid helps low-income people afford things like pap smears, STI and cancer screenings, contraception, HIV and pregnancy testing, pelvic exams and prenatal care.

Cutting Planned Parenthood’s funding would shutter an unknown number of clinics, and according to the Congressional Budget Office, will hamper access to medical care for roughly 15% of low-income and rurally located people.

Luckily, this provision — and the abortion provision — will be harder for McConnell to pass than the bill itself, according to the Senate parliamentarian. Because Senate Republicans have been trying to jam through their plan on the premise of “budget reconciliation,” and because — in violation of the Byrd Rule — the aforementioned provisions are not specifically budget-related, they would require more votes to pass.

According to the New York Times, securing the requisite 60 votes on those points will be a tall order indeed. But if this Congressional season has taught us anything, it’s that GOP legislators aren’t overly concerned with unlikely odds. Where there’s a will, there is — unfortunately — sometimes a way, but many hours of debate still lie ahead.