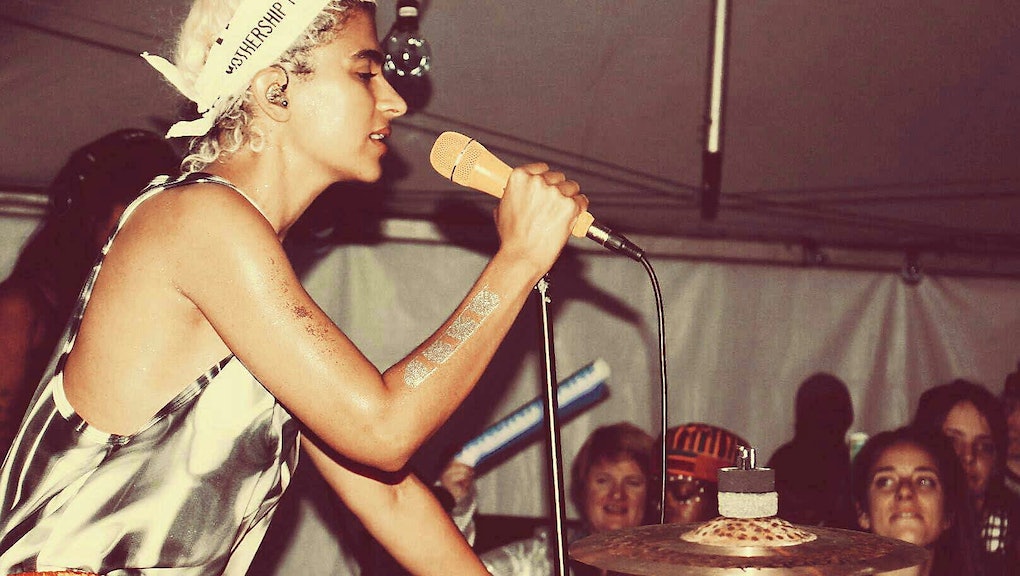 This will be the third year Wise produces the annual event, and the 2017 festival is slated to be the biggest one yet, with an expected 600 to 800 women participating in the two-night, three-day camping experience from Oct. 13-15. The event consistently sells out, and each year, Wise finds she needs to move to bigger grounds to accommodate the growing number of attendees.

In her conversation with Mic, Wise addresses the Swedish festival as well as the important decision for MOTHERSHIP to be trans-inclusive — something the Michigan Womyn’s Music Festival, defunct as of 2015, never was in its 40-year history.

Mic: How did MOTHERSHIP come to be?

LW: Three years ago, I was in Los Angeles and I really came into feminism, and I was really excited about it. I was really confused as to why, in Los Angeles, there wasn’t a lot happening around feminism. There wasn’t a lot of dialogue or events or interesting things happening. I did a bit of research on women’s festivals and the Michigan Womyn’s Music Festival had ended, for some reasons that are very valid, like the trans exclusion that was happening there, and that’s not cool. I wanted something like that and I couldn’t find it, so I made it. That’s what MOTHERSHIP is, it’s a modern-day feminist festival that’s fit for 2017.

Can you talk a little bit about the trans inclusion at MOTHERSHIP and why that’s so important?

LW: MOTHERSHIP is 100% trans-inclusive, and we basically say that anyone who identifies partially, or wholly, as a woman is welcome there. So if someone is mid-transition or they feel that in some way they identify with the spirit of [a] woman, they’re welcome there. I would say the only people who might not be a fit would be cisgendered heterosexual men.

Cool. I’ve always wondered, kind of tangentially, are there cisgendered heterosexual men on site, like changing the bathrooms? Or is it all women? How do you navigate that?

LW: We navigate that as best we can. Sometimes we have men come on site to do the trash, if those are the only people we can find to do that specific job. We’re not that strict about it, but we try to make it known, like, “Men on site around this time.” Last year, some of our food trucks, they had mostly women serving at the food trucks, but there were a few men. We kept the food trucks in kind of a separate area, so we still felt like we had a safe space.

This year it’s better because we’re growing, so we’ve been able to attract more all-female vendors, which is really dope. I try the best that I can, and if there are little exceptions, I try to navigate it in a way that’s going to make everyone still feel safe and comfortable.

Can you speak to the statistic you’ve mentioned that only 15% of music festivals have women on stage?

LW: It’s something around 15% of all festivals [in 2016] had all-women acts on stage, and it was something like 75% of acts were all men. The rest was mixed-gender on stage. I wanted to counteract that and really turn it on its head. Only women are on our stage. All of our acts are 100% women, and that’s been really fun because a lot of people in music will say, “How do you find these acts?” I’m like, “How do you not?” There are so many talented women out there ... and I really wanted to show everyone that all-female acts can kill it.

It’s a music festival, but there are many different parts. Can you speak about the workshops and the “interesting” panels, as opposed to more traditional ones, you want to host at MOTHERSHIP?

LW: Prior to this festival, I felt in [Los Angeles] that a lot of the ways I could interact with feminism was through panels — and panels are awesome, you can learn a lot — but I wanted MOTHERSHIP to have something a little bit more exciting and special. I describe MOTHERSHIP as the intersection of celebration and education around feminism. Our events definitely reflect that. From sunup to sundown, there’s programming throughout the day, and then as soon as the sun goes down we have live all-female music acts. We have panels on the state of feminism, so if someone is coming into the festival like, “Okay, I’m here. I love this all-girl environment, I love this feeling, but I’m not sure what I’m doing and I’m not sure what feminism is, or where we’re at,” we have a panel for that. We have panels on digital activism, because that’s something that I’m really passionate about.

[In 2016] some of our best-attended workshops were our sexual pleasure workshops. We’ve amplified that [in 2017]. We’re doing a lot of workshops on sexual pleasure, sexual health, BDSM, polyamory. People seem really hungry for this information ... and the spaces were so full and [the] women were so open. There were trans women there, there’s the whole gamut, and everyone was just being very transparent about their bodies and their sexual health and learning from each other. We have yoga workshops, but we’ve taken a spin on them, so we’ll have yoga, but it’s only to hip-hop music by women in the ‘90s.

Why do you think the sexual pleasure workshops have done so well, and how do they fit into a feminist space? Why is it so important for women to have a space to talk and learn about sexual pleasure and sexual health?

LW: For so long, women’s health and women’s sexuality has been repressed and so under-studied and under-discussed, so it’s like the Madonna and the whore thing, right? We can’t win. Moving into this safe, feminist space [that is MOTHERSHIP], being able to talk about that stuff is really liberating, and people are really curious and people are really excited. Clearly people want this kind of information and want to learn more, and it’s a safe place to do that. They can dip their toe in, but they’re not, like, going to a dungeon right away [laughs].

Through the content you’re putting on Instagram and making sure the festival is trans-inclusive, why is it so important for you to create a space — both physically and digitally — of intersectionality, and include different voices of women who, even in feminism, haven’t had the stage?

LW: For me, I’m still learning. As a white cisgendered woman, I’m always trying to learn how to be a better feminist. And I know that the more inclusionary this movement is, the more intersectional it is, the stronger that we are. Diversity is an asset.

What has been the biggest obstacle in creating this event? Have you gotten pushback from men who feel excluded?

LW: There’s a huge problem at festivals in general with harassment and sexual harassment — and in the world. I think that creating a safe space for women is super important, and yes, one of the first questions that every man asks is, “So are men not allowed?” I’m like, “It’s a women’s festival. No.” So, yes, I’ve experienced a little bit of pushback from men, but it doesn’t really bother me much.

I spend a lot of my time surrounded by women, and I’ve noticed how women are different when they’re just with women and how I get to see more of who they are, I get to hear more of their ideas, there’s more transparency. [They] kind of just walk into their own a little bit more, and I love that. I get off on that. So creating that space for everyone who wants it is super powerful for me and important. I’ve noticed how powerful it is to be in an environment where men are removed, and it changes things.

What do you hope everyone comes away with after the weekend?

LW: I used to say that I wanted them to walk away saying “Yes! I am a feminist,” but I think we’ve moved beyond that now. Now I want everyone to walk away with being empowered by other people’s stories. I think that a lot of times we feel isolated in our oppression, at whatever level you’re experiencing that, and when you hear the same story, whether it be about cat-calling, racism, etc., sharing that same experience with someone is really empowering because now you’re not just standing up for yourself, you’re standing up for a community.

I think that [the] sharing and that community you get from MOTHERSHIP is a really empowering thing. I noticed at our festival [in 2016] that so many people met and started collaborating and making their own little things, and seeing all of that happen — seeing this musician with that activist create this cool thing — that’s amazing, too. Those three days are a really intense experience and these women get to know each other in a really intense way, and that leads to new art, new ideas and new activism, and I love seeing that.