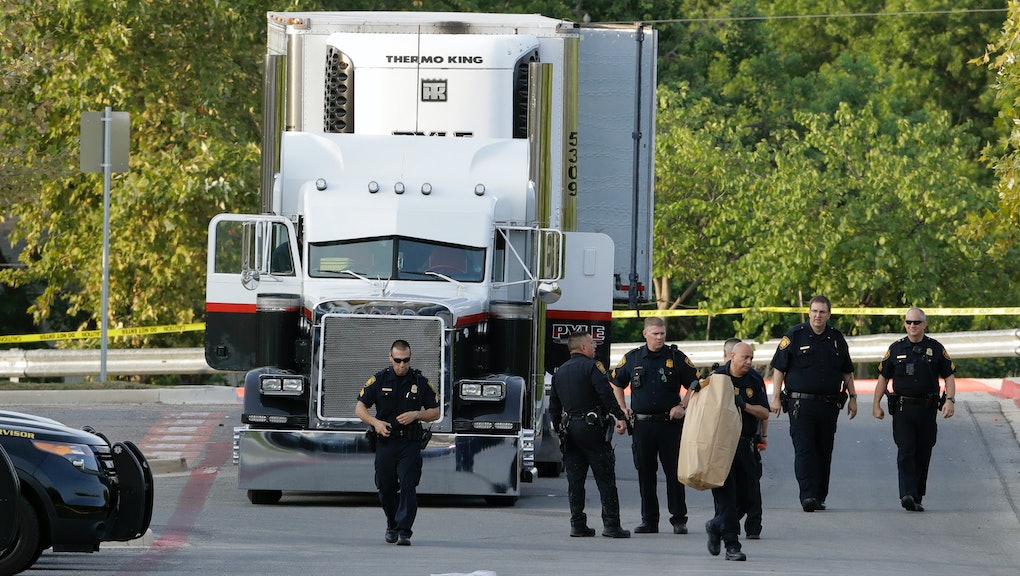 Sunday’s discovery that between 30 and 40 people had been smuggled across the border in the back of a tractor-trailer — and the subsequent reports that 10 of those people died from the sweltering heat — was a startling one. But historically speaking, it’s not too unusual.

Deadly human smuggling has been a problem for decades. Aggressive anti-immigration policies and rhetoric have only made the practice more commonplace, with smugglers or “coyotes” making millions off of immigrants desperate to enter the United States.

With President Donald Trump in office, experts said the problem may only grow worse.

“People use these risky means of entering the country when safer means are unavailable to them,” Alex Nowrasteh, an immigration policy analyst at Cato Institute’s Center for Global Liberty and Prosperity, said in an interview on Tuesday.

Though authorities have a difficult time keeping track of statistics on human smuggling due to the underground nature of the practice, San Antonio Police chief William McManus reminded reporters this latest case is hardly an “isolated incident.”

“Fortunately, we came across this one,” McManus told NBC News on Sunday. “Fortunately, there are people who survived. But this happens all the time.”

“The more border enforcement there is, the more people there are who are going to take risks like this — and it will result in more people dying,” Nowrasteh said. “I would expect it to continue and possibly increase during the Trump administration.”

So far, Trump’s aggressive plans for stemming the flow of undocumented immigrants into the U.S. have yet to materialize.

Though Trump signed an executive order paving the way for his much-talked-about border wall on his fifth day in office, its construction is indefinitely on hold until he can hammer out the finer points — like who will pay for it. Either way, Americans may not see Trump’s vision for a border wall come to life during the next 3.5 years of his term, considering a February Department of Homeland Security study estimated the wall itself would take 3.5 years to build.

Similarly, Trump has so far failed to deliver on his promise of securing the U.S.-Mexico border with 15,000 border patrol and ICE agents, a plan that could “cost billions” and “take years,” according to AZCentral.com.

But what Trump’s administration lacks in concrete action it makes up for in strong anti-immigrant rhetoric — and that alone can be enough to turn immigrants toward high-risk strategies for entering the U.S.

Back in March, Quartz reported that the mere “perception” of the U.S. as being unfriendly to undocumented immigrants is driving up the prices associated with smuggling — which can cost immigrants as much as $15,000 — and encouraging immigrants to go through with it before Trump builds his wall.

Four months later, not much has changed.

“This administration is focused on the border,” Nowrasteh said. “They’re focused on satisfying their base and doing what they promised to do during the campaign, regardless of the effects and reality on the ground.”

Audrey Singer, a senior fellow at the Urban Institute, which conducts research on immigration and other public policy issues, said taking a historical look at border-crossing strategies could be helpful in predicting what the rest of Trump’s tenure could bring.

In the 1990s, San Diego, California, and El Paso, Texas, were hot spots for illegal entry into the country. But Operation Hold the Line — a human and vehicle blockade the U.S. government implemented in 1993 in El Paso — and Operation Gatekeeper — a similar initiative launched the following year in San Diego — succeeded in curtailing the areas’ illicit border crossings.

Following those sanctions, Singer said immigrants began trying to enter the U.S. via the Arizona desert — a far riskier, and deadlier, route.

Singer said there’s another alternative to consider, which is that there are many people who may decide not to risk crossing the border at all. We’ll never know how many people have already made that choice, just six months into Trump’s presidency.

“There are people who may have decided that it’s not worth it: They’re not going to come in, they’re not going to be reunited with their family members, they’re not going to visit their sick relative, or go to the funeral or graduation,” Singer said in a Tuesday phone interview. “I would think that the current [political] moment is having an impact on those decisions about how to cross the border and whether to cross at all.”

“The result of these laws is that people are going to take these risks, and a lot of them are going to die. I don’t think people can grasp that this is the cost.”

The 30 or more people loaded in a fatally hot tractor-trailer headed for Texas had made a risky choice, one of whom reported that he and his six friends accepted a charge of $5,500 for a trip that might not be successful.

“It’s a tragic loss of life, but this is the type of thing that’s going to happen when you have immigration laws,” Nowrasteh said of Sunday’s human smuggling fatalities.

Nowrasteh said the recent events reminded him of the bucket of cold water Yale law professor Stephen L. Carter threw on the country’s legal system in June 2016, when he wrote in a piece for the Atlantic that “enforcing the law is inherently violent.”

“Every law you enforce, you’re eventually going to have to kill someone to enforce it,” Nowrasteh said. “Is it worth creating a black market where these kinds of deaths occur, in order to enforce immigration laws to keep mostly nonviolent people out of the country? Is it worth it? The result of these laws is that people are going to take these risks, and a lot of them are going to die. I don’t think people can grasp that this is the cost.”

Nowrasteh doesn’t think Trump’s administration can grasp the cost either.