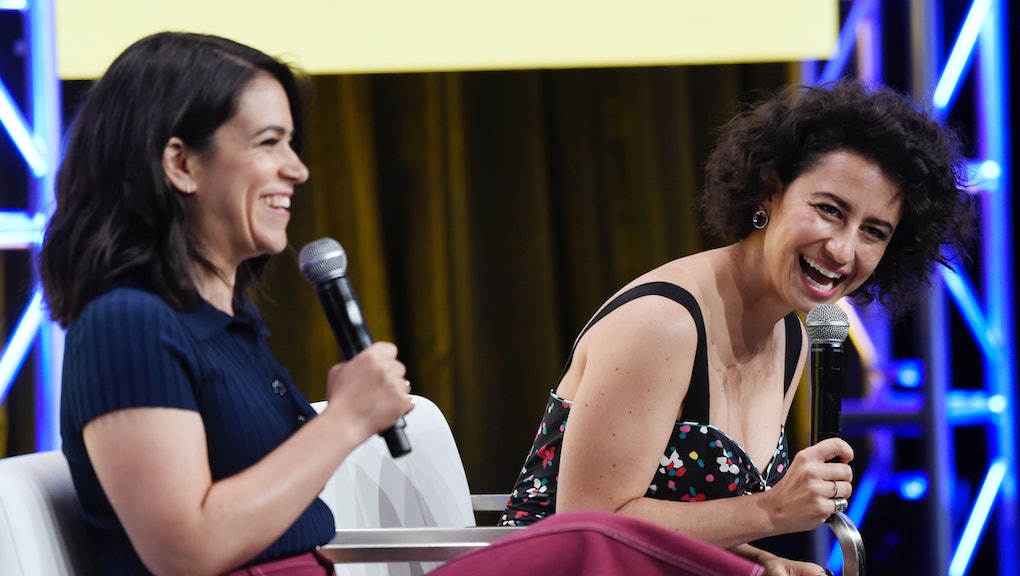 LOS ANGELES — Ahead of Broad City’s fourth season premiere on Sept. 13, much has been made in the press of how the show will be treating Donald Trump. Namely: They’re not naming him at all, instead censoring every mention of him as if his name is a slur.

As multi-hyphenate creators and stars Abbi Jacobson and Ilana Glazer explained at the Television Critics Association summer tour on Tuesday, simply having to speak the president’s name on a regular basis in real life is burden enough. “It sounds so gross saying it so many times,” Glazer told the collected television reporters and critics. Because Trump gets so much attention across TV as is, she added, “We just didn’t want to share airtime.”

It’s not surprising that Glazer and Jacobson have such strong feelings about the outcome of the 2016 election — the onscreen versions of Ilana and Abbi fawned over Hillary Clinton when she made a guest appearance as herself on an episode of Broad City in March of 2016. After the panel, Glazer and Jacobson sat down with Mic to talk about whether Clinton’s loss affected their process, as well as the new season and how long they plan to do Broad City.

Mic: One thing that sticks out about the new season is how many guest stars you have set: Shania Twain, Wanda Sykes, RuPaul. How different is it recruiting big names to appear on the show compared to when you guys first started Broad City?

Ilana Glazer: Totally different, completely different. For example, Shania Twain: She wanted to be on the show because we constantly talk about her on the show, for some reason. That inspired the episode that she’s written into. It’s a zero-to-100 different game.

Abbi Jacobson: With every actor, it’s a different kind of approach. Sometimes it’s like, we know they love the show, we think they’ll do it. And then sometimes, it is more: How can we reach out in a different way, other than representatives?

IG: Then with Ru — Ru is actually in a few episodes. We could’ve cast someone else, but it wouldn’t have been impactful. It was, like, written for RuPaul. We now have people who want to be on the show who are fans of the show, but sometimes it depends. We heard Ryan Gosling loves the show, but we’re like, where the fuck would Ryan Gosling fit on the show?

AJ: We gotta be kinda careful. A lot of the guest stars, we want them to fit in on the show and not just be —

Last season, your big cameo was Hillary Clinton, who appeared in an episode that you guys said wasn’t a political statement, but was taken by some as one anyway. Did you feel any need to respond to the reception of that episode this season?

AJ: I didn’t feel any need to reference back to that episode in particular. But just in general, the election impacted the season in a big way.

IG: I think some of our supporters were 19-year-old Bernieheads who were shocked that we didn’t have Bernie [Sanders] on the show. We wrote the show before Bernie was famous.

IG: Hillary was meant for that. And we didn’t feel the need to explain ourselves. We’re so proud of that episode, and continue to be.

Is there any feeling of disappointment or pain looking back at it now that the election went the way it did? Like when you break up with an ex, and you find one of their sweaters in your closet —

IG: And it floods back?

AJ: The characters feel that way in the show, just like we do when we think about the results of the election.

IG: We don’t make a thing of it, though. We don’t focus on Hillary. We’re moving forward.

AJ: But she’s in the background of the show. There are Hillary posters on the walls —

IG: Yeah, in one episode, there’s a poster that I try to hide. She’s [there], but the reality of the show continues. The girls, just like us, are coping with having Donald Trump, who is a steak salesman and bragged about sexually assaulting women, as our president. In real life, I’m not that focused on Hillary. I’m praying she’s getting massages every other day and drinking and smoking and relaxing. I pray. But I’m not actually that focused on her.

Trump’s election seems to be polarizing TV in opposite directions: Some shows are naked responses to the current political climate, while other networks are ordering more shows that will appeal to middle America. Did you take the election as an opportunity to skew more left this season?

IG: We weren’t like, “Let’s be more liberal.” We were like, “Let’s be very, expertly, precisely clear about what we want to say.” That happens to be extremely progressive. Before, it was more this feeling of the message of what we represented. It’s not that it’s affected the content, it’s just made us more aware of how clear you need to be to get your point out. That happened very much in the rewrites — after the election, we had a hiatus — where we came back and said, “Oh, did we think we were pointing at this kind of message here? Well, let’s explicitly say it.”

AJ: We’ve always done that the whole time we’ve had the show. But it’s more clear to us what exactly we want to talk about as we get older. It’s just more apparent to us.

IG: I feel like, in the past 10 or 15 years, maybe since 9/11, comedy has become a very important platform for philosophy and political discussion in America. It’s easier to be able to laugh about stuff. Pre-9/11, it was, “Don’t talk about politics, that’s rude.” Post-9/11, how do we not talk about politics? The Bush years, how do we not talk about politics? The Obama years — everything’s been leading to this divisive climate that we’re in. Art has just become exponentially more political since the election. Leading up to the election, it was political, but that line in the sand [came] in the election. Everybody’s art is political, even if they want to seem banal. Then you seem like you’re pointedly not talking about it.

AJ: This presidency makes your morals political, where you stand on right and wrong. Everything is political.

“Everything’s been leading to the divisive climate that we’re in. Art has just become exponentially more political since the election.” — Ilana Glazer

Speaking of your platform: Other Comedy Central shows like Inside Amy Schumer and Key and Peele have either ended or taken hiatuses around season four or five, and this is four for you. Have you discussed how much longer you want to do the show?

AJ: We’ve been talking about it. It’s about the quality control. We want to make sure we’re never making it past the point of every episode being so important and like our babies. We never want to get to a point of lazily writing these characters.

Has the election influenced your thinking at all about how much more Broad City you want to do?

IG: It makes me feel like, “Should we do 30 seasons of this?” It makes me think we should do more. But also, the political move is making the best show we possibly can.