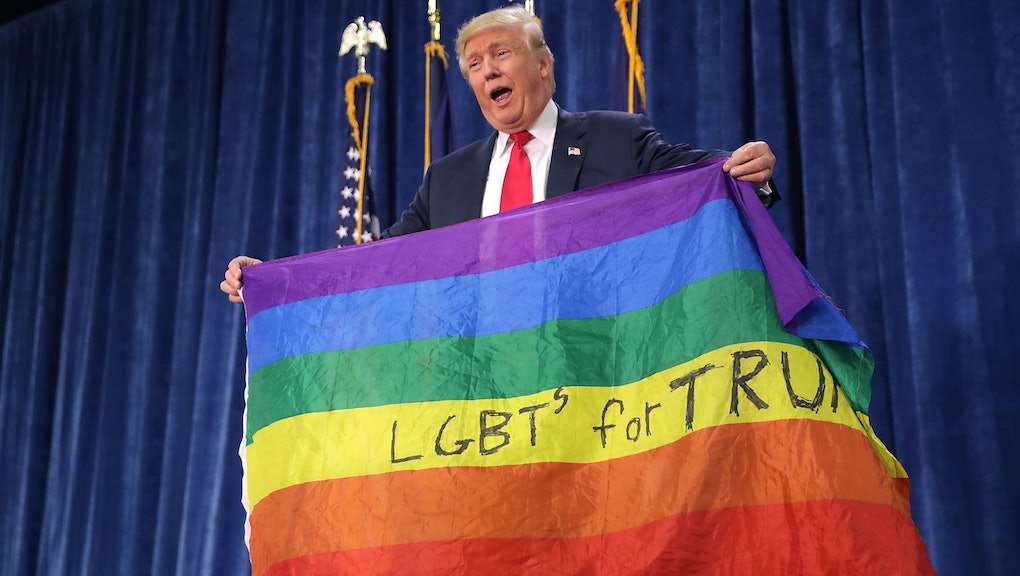 On Wednesday, President Donald Trump, who repeatedly claimed during his campaign that he would fight for the rights of LGBTQ people, announced via Twitter that the United States military would ban transgender people from serving.

According to a 2014 estimate, there are nearly 9,000 transgender people serving as active-duty military. In his tweets announcing the decision, Trump said that the U.S. military “cannot be burdened” with the “costs” and “disruption” that “transgender in the military would entail.” The announcement represents a striking blow to the rights of the transgender community in the U.S., and a rejection of those who have and would serve in the military.

It also should come as a shock to anyone who believed Trump’s campaign trail claims that he would be a friend and ally to LGBTQ people in the U.S. — an argument he brought up again and again.

Here are three times the president voiced his support for the LGBTQ community:

During a campaign stop in Atlanta, Trump bragged about his relationship to the gay community, saying “Ask the gays what they think and what they do in ... Saudi Arabia ... you tell me who’s your friend, Donald Trump or Hillary Clinton?”

“Thank you to the LGBT community!”

Also in June of 2016, Trump tweeted “Thank you to the LGBT community! I will fight for you while Hillary brings in more people that will threaten your freedoms and beliefs.” That tweet came just two days after a mass shooting at Pulse, a gay nightclub in Orlando, Florida.

Trump appeared on Today and said that North Carolina, which had recently passed a “bathroom bill” banning trans people from using the bathroom that matched their gender identity, should let people to “use the bathroom they feel is appropriate.”

Just one month into his presidency, the Trump administration dealt a blow to trans rights when it announced that it was rolling back a Barack Obama guidance meant to protect trans students in public schools by letting them use the bathrooms of their choice.

It wasn’t just Trump making the claims — in October 2016, Chris Barron, a conservative political strategist who worked to rally LGBTQ Trump supporters, called Trump “the most pro-LGBT pres candidate ever nominated by either party.”

After a photo was snapped of Trump holding up a rainbow flag during a campaign stop in Colorado, an op-ed in the conservative outlet the Washington Times lauded Trump and claimed “no other Republican presidential nominee in history has embraced the LGBT community in such a loud and proud way.”

So loud and proud, apparently, that the Trump administration forgot to acknowledge June as LGBTQ Pride month this year — not to mention this latest blow to transgender Americans.