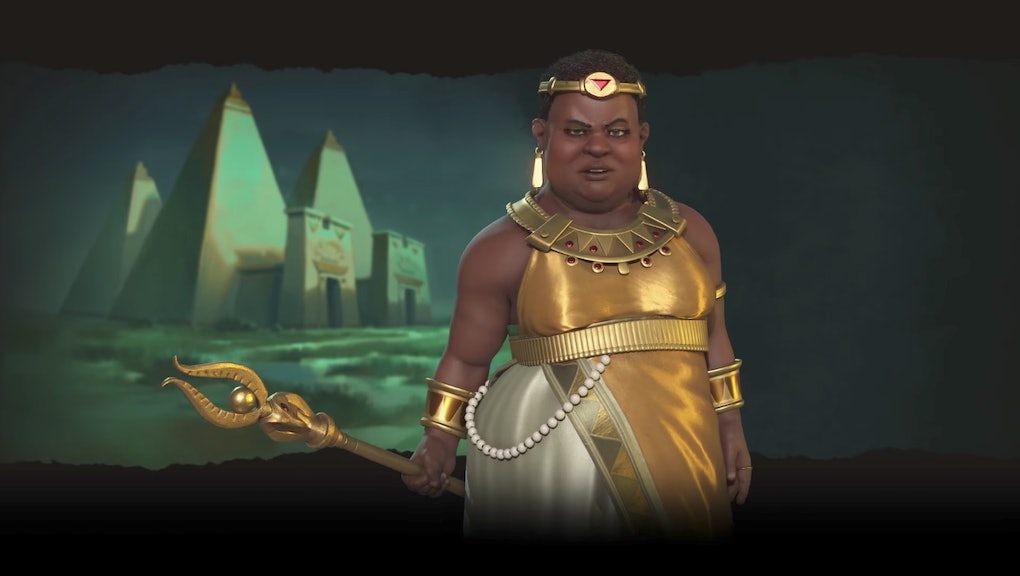 In its many years, Civilization games have given us nations to defend, intellectual treasure to unlock and leaders to befriend (or betray). We’ve seen leaders of all kinds, including Gandhi (whose hilarious in-game propensity toward nuclear armament is well-documented), Ramkhamhaeng from Siam (one of my favorite cultural leaders) and Boudicca (if I want to kick some serious ass in military conquest).

We’ve also had several black leaders — Songhai’s Askia, Ethiopia’s Haile Selassie and Zulu’s Shaka in Civilization 5 and Mvemba a Nzinga in Civilization 6 — and a handful of brown leaders. But for the most part, they’ve been men. Cleopatra and Hatshepsut have rounded out the Egyptian representation, of course, but we hadn’t seen a sub-Saharan African black woman leading a nation in-game.

Civ 6 Nubia: Why Amanitore is such a big deal

Sid Meier’s Civilization series has long been a staple of 4X games — 4X refers to the strategic tenets of “eXplore, eXpand, eXploit and eXterminate” that are popular within this brand of strategy games. Sid Meier’s work in the early ’90s defined the 4X genre both in terms of mechanics and flavor.

The original Civ and its sequel relied heavily on text to communicate — it was the early ’90s and we made do with what we had. Players didn’t get an opportunity to see what the leaders might have looked like until their portraits were implemented in Civilization 3. And in those days, we might not have cared.

But, as we’ve come to learn, over the past 15 years especially, representation in games matters. Diversity is important. Being able to see ourselves in the characters that we’re temporarily inhabiting in a digital-scape means a hell of a lot to many gamers. 2K Games has been dedicated to bringing new and interesting leaders from a variety of backgrounds to the modern Civilization games, and it shows.

On July 26, Firaxis and 2K Games released a first look at the newest Civilization 6 leader to join the fray: Nubian queen Amanitore.

Black queens have been overlooked in the 25 years that Civilization has served as a mainstay of the strategy genre. We’ve seen a number of influential black leaders, but until Amanitore’s announcement, they’ve been men.

Of course, we’ve had the Egyptian queens, but that’s not exactly the same. Cleopatra’s origins have been traced back to ancient Greece. Civ 4’s Hatshepsut, who died in 1458 BC, is more of a mystery. There’s actually an ongoing debate over her race, which makes it hard to pin down her racial heritage. (What’s more, Civ 4 came out in 2005.)

But there’s no denying that Amanitore is a powerful black female leader.

Unfounded criticisms of too many women in Civ 6 aside, I’m hopeful that we’ll see more women of color taking over the digital world-stage. I’d be interested in seeing a military-focused African queen — like Candace, Empress of Ethiopia. After all, Empress Candace halted Alexander the Great at her borders and refused to be cowed. I’m imagining a combination of Tomyris’ military-minded diplomacy and Gorgo’s dedication to tactics.

Fans of the game appear to be excited for what the Nubian queen may be able to accomplish when put to task. It will take time to see if Amanitore’s armies can stand against Montezuma’s aggression, but from what the video has shown (and fans have begun to analyze), she will be an economic and cultural powerhouse (as long as she’s settling in the desert or floodplains).

Now that we have Queen Amanitore (and I’m hoping for the Empress of Ethiopia next), we can finally see how powerful black women lead their nations with ingenuity, creativity, military might and compassion. And I am so excited to see who 2K and Firaxis will introduce us to in the next big Civilization patch.