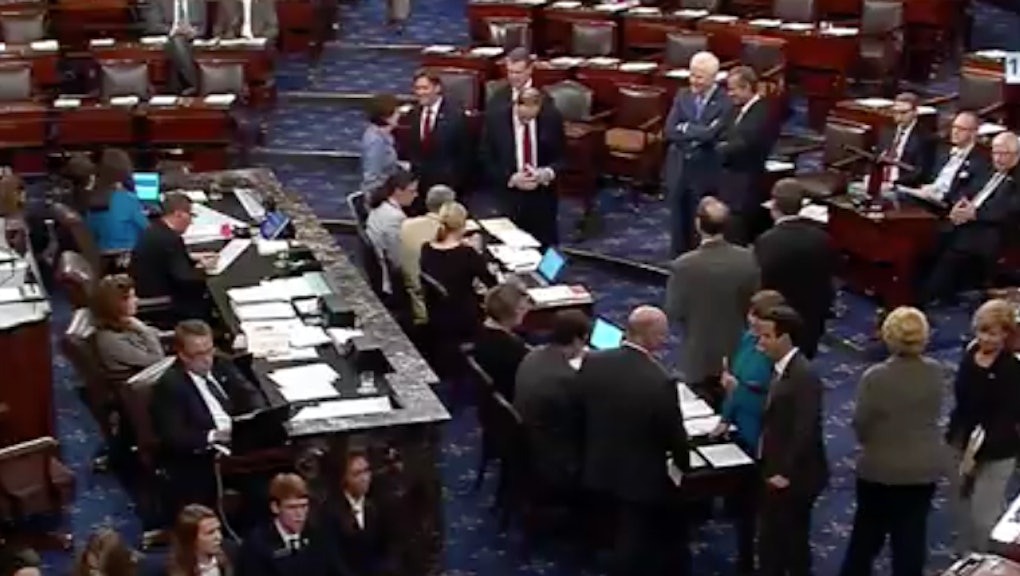 Senate Republicans suffered yet another failure on Wednesday in their quest to repeal and replace the Affordable Care Act, after an amendment that would strictly repeal much of the ACA failed to garner enough votes to pass.

The amendment failed, after seven Republican members voted against the plan, ensuring it would not receive the 50 votes necessary.

Among the GOP “no” votes were Sens. Susan Collins of Maine, Dean Heller of Nevada and Shelley Moore Capito of West Virginia, John McCain of Arizona, Rob Portman of Ohio, Lamar Alexander of Tennessee and Lisa Mukowski of Alaska.

The strict repeal of the ACA, better known as Obamacare, would cause 32 million people to lose their health insurance and double premiums, according to an analysis from the non-partisan Congressional Budget Office.

This is the second possible ACA replacement to fail in the Senate in as many days.

On Tuesday night, the more comprehensive Better Care Reconciliation Act — which would slash Medicaid funding and repeal a number of other ACA regulations — went down after nine Republican senators voted against it.

While the straight Obamacare repeal amendment failed, that does not mean the entire bill is dead.

Republicans have yet another proposal to put to a vote as the debate on the bill continues. After 20 hours of debate expire, Democrats will also be able to offer an unlimited amount of amendments — which they hope will force Republicans into casting politically challenging votes.

The third amendment Republicans have yet to vote on would nix only the individual mandate and the medical device tax imposed by Obamacare. That plan has been dubbed the “skinny repeal,” and is an effort for Senate Republicans to just get anything passed, and instead work in conference with House Republicans to come up with a more comprehensive plan.

“I don’t believe the so-called ‘skinny repeal’ is the solution to the problems of the Affordable Care Act, but I do believe it is a solution to taking the next step to conference which is the place I hope we get,” Alexander, who voted against the more comprehensive repeal bill, told Mic.

The so-called skinny repeal, however, would also have negative impacts, with 15 million people losing coverage and forcing rates to rise by 20%, according to the CBO.

And it’s unclear whether that proposal has the votes to pass.

“Everybody keeps asking me if I’m going to support the ‘skinny repeal’ amendment to which I say, I have no idea what’s gonna be in it,” Collins — who’s voted against the first two GOP options — said in an interview with Mic.

The Blue Cross Blue Shield Association — a group of major insurers — has come out against the skinny repeal, saying it would destabilize the health care markets.

“In order to ensure a stable individual insurance marketplace, any final legislation must include these crucial elements to avoid steep premium increase and diminished choices that would make coverage unaffordable and inaccessible,” the BCBSA said in a statement, referring to the individual mandate that Republicans want to eliminate.

Will Drabold contributed reporting from Washington.

Read More: This is what will happen during the health care debate over the next few days.