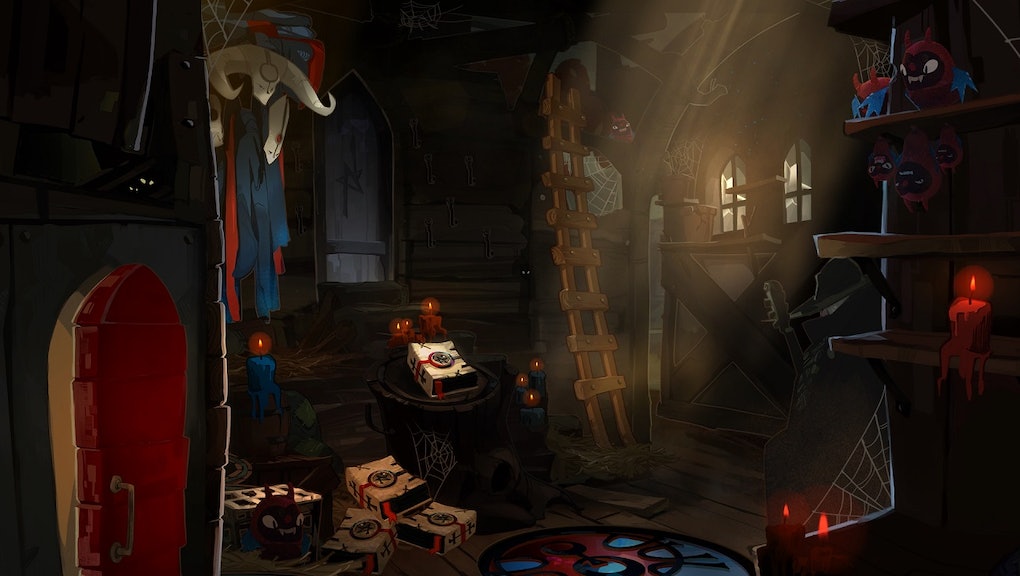 ‘Pyre’ Review-in-Progress: Supergiant’s sports RPG is unlike anything else

It’s rare, at least for me, to immediately be interested in a game based on the developer’s pedigree, sight unseen. For example, I will check out anything Hideo Kojima makes because it’s guaranteed to be interesting, if nothing else.

After how much I adored Bastion and Transistor, Supergiant Games has earned a spot on the list of developers whose work is unconditionally appealing to me. The indie outfit that started out developing games together in a house just released Pyre, its third and most ambitious game yet. I haven’t played enough for a full review yet, but based on the first four hours or so, this is a game you need to check out.

Pyre is a little tough to explain. Most of your time in the game’s single player mode will be spent journeying across a largely uninhabited land called the Downside in a covered wagon, occasionally stopping to talk to your allies. It’s functionally identical to a visual novel here, with conversations occasionally being broken up by dialogue choices that seem to offer flavor rather than huge forks in the story.

These conversations lead up to Rites, which are this game’s version of combat. Without getting too deep into the story, you’re competing against other travelers in an ancient sport for the right to eventually live in a much more hospitable place. Pyre is basically a role-playing game where combat is replaced by fantasy NBA Jam.

Rites are three-on-three competitions where each team has a goal on opposite sides of the playing field. You can only control and move one of your party members at a time, and when they’re carrying the equivalent of the ball, they can only act evasively. When you aren’t carrying the ball, you can use a couple of offensive techniques to temporarily banish opponents for a few seconds, creating an opening to their goal.

Each party member who joins you over the course of your journey has different movement and offensive capabilities. One character can flutter jump (think Kirby) for a few seconds over the heads of your opponents, while another is a hulking brute who moves slowly but is tough to take down. Most importantly, though, it all feels fantastic. Supergiant’s previous games took great care to make sure moving around the environment and dealing with the obstacles in your way felt exactly like those things should feel. Pyre is no different.

One last thing I’ll note about the gameplay is that there is no concept of “game over” in Pyre. Just as a sports team’s season doesn’t end the second they lose one game, you can keep going if you lose. The early hours of the game are easy enough that I haven’t lost yet, but I’m fascinated to see what happens when I do.

Plenty of games are fun to play, though. All of the other things that surround the distinctive Rites sequences are what make Pyre worth seeing. If you’ve played Bastion or Transistor, you know what I’m talking about.

Put simply, Supergiant’s art department has done impeccable work here. Each environment would make a sweet desktop background and the characters animate with flair. Speaking of characters, their designs are excellent. Jodariel is an enormous demon lady who towers over every other character, while Rukey is a scoundrel dog man with a perfectly sleazy mustache.

One detail I love is that each “team” that competes in the Rites has a name, uniform and gimmick like any real sports team. You’re part of the Nightwings, who wear fancy blue vestments and have something of a negative reputation among the other squads. One team I played against was made up of sea serpents who donned medieval armor and spoke like knights.

Greg Kasavin’s writing takes the same vague, folktale-esque approach to worldbuilding as Bastion and Transistor. You can hover over proper nouns in dialogue to get a brief description of what they refer to, but this isn’t like a Dragon Age lore encyclopedia. Information is fed to the player in tiny morsels, creating a sense that the world is much larger and more intricate than what we’ll ever see.

Kasavin inserts personality in place of explicit lore. Early on, you meet a character who can’t remember her name, but can remember what it rhymes with. You’re then given a couple dozen names to choose from, with one of them being “Bae.” If you hover over Bae, Kasavin has left a humorous little gift for you.

Pyre, so far, is full of goofy little details like that. Considering you don’t actually move an avatar around a space and dialogue only happens at specific junctures, it does a fine job of giving you space to explore and play around with its limited environments and character interactions where it can.

It also has a simple, elegant solution to the player character’s pronouns that I appreciated.

Though my early impressions of Pyre are mostly positive, I have a couple of concerns. The Rites are fun, but as I mentioned earlier, they haven’t been challenging yet. So far, I just pick a fast character and sprint around the opposition into their goal. Loading screen tooltips hint at grander strategies, but I haven’t had any reason to deploy those yet. I’m hoping that becomes necessary the deeper into the game I get.

I can see the lack of free movement around an environment that Bastion and Transistor did so well being a hang-up for some players. You spend a great deal of time moving a cursor around static environments and reading text in Pyre, which is not some people’s idea of fun. I’m into it, but you might not be, and that’s fine.

I’m not super worried about this given Supergiant’s track record, but I’m hoping to see slightly deeper dives into the politics of this world later in the game. The place you’re trying to get to seems better than the place you’re at, but it doesn’t necessarily seem great. I trust Kasavin and co. to deliver on that, but at the moment, I haven’t seen it yet.

Still, I recommend Pyre if any of the above sounds intriguing to you. It’s $20 on PlayStation 4 and PC right now.