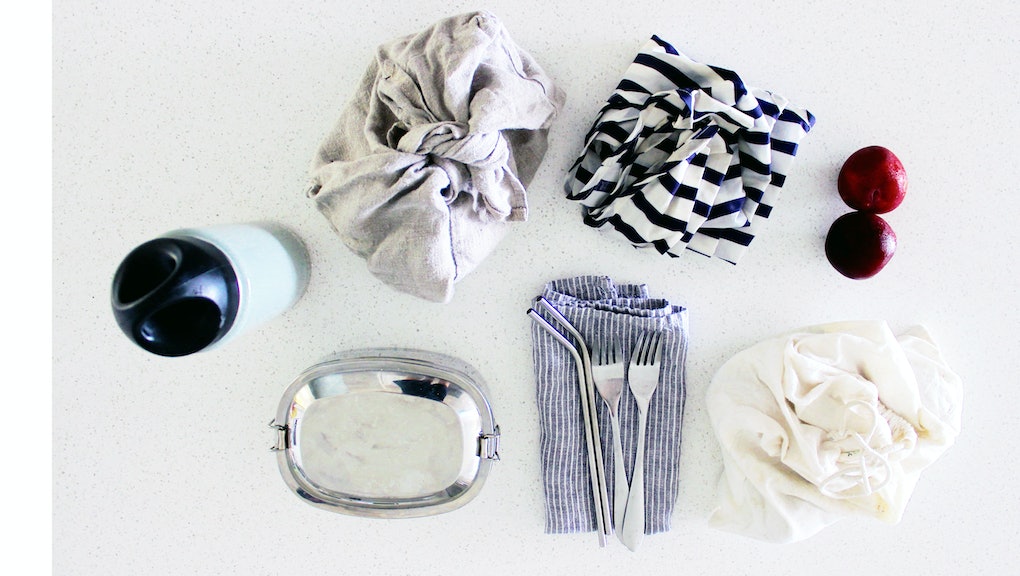 At a company cocktail party in 2015, Celia Ristow found herself caught between her principles and dinner. As someone who attempts to produce as little waste as possible across all aspects of her life, she uses only reusable, or at least recyclable, items. That night, to her frustration, her only choice come mealtime was throwaway plastic plates, cups and utensils. She could have made a fuss; instead, she joined the party.

The following year when she attended the party, she wore her two favorite accessories: flashy earrings and a canvas tote. In the bag, she packed a plate (ceramic), a fork (stainless steel) and a napkin (cotton).

Now 25 years old, Ristow, who writes the blog Litterless and co-founded the advocacy group Zero Waste Chicago, is part of a growing movement of young idealists practicing what can be thought of as “lifecycling,” or the next evolution of recycling and reusing products. Lifecycling takes recycling to the next level; it’s a philosophy that embraces new, creative uses for products as a way extend their cycle, positively benefit your personal life and keep as much garbage out of landfills as possible.

“Living sustainably isn’t about telling other people what to do,” Ristow says. “It’s about thinking through your own actions.”

Seasoned lifecycling pros often aim to produce as little as one jar of waste annually, an admirable feat that takes commitment and more than a little practice. But even if producing nearly zero waste isn’t your goal, adopting a handful of methods Ristow and her peers implement can be a feasible step toward living more sustainably.

Ristow carries her own water bottle, for example, and wears mostly secondhand clothes. She often buys in bulk and takes the time to look for local composting drop-off points when she travels, too. When she can’t avoid plastics, like the containers her favorite soba noodles come in, she finds at least one more use for them before tossing them.

To get an idea of what the potential impact might be if more people joined in the lifecycling movement, consider that more than half of what Americans buy ends up dumped into landfills or burned. Simply recycling or composting that trash we make would have an environmental impact equivalent to taking more than 38 million cars off the roads. Even if you can’t see the measurable global impact, you will likely see a difference at home pretty quickly — and as an added bonus, living sustainably is often easier on the wallet. By finding additional uses for things you already own, you can alleviate the need to spend more money on new items.

Lifecycling is taking hold across the world, too. Cities from San Francisco to Buenos Aires, Argentina, have set goals to be trash-free in the next decade or so.

Lauren Singer, a 26-year-old New Yorker who writes about her sustainability adventures on her blog, Trash is for Tossers, credits these changes with a growing confidence among consumers that voting with their dollars makes a difference. She supports businesses with sustainability initiatives and has put her money into action, as well. Singer and her business partner, Daniel Silverstein, recently opened Package Free, a pop-up boutique in Brooklyn packed with eco-conscious products — from bamboo toothbrushes to products by Bureo, which makes skateboards, sunglasses and clothes from reclaimed fishing nets that would otherwise pollute the oceans.

Other green-minded advocates have focused on making environmentalism more accessible. Downloadable apps help you locate facilities for practically any kind of recyclable and discardable items (iRecycle) and find a new home for reusable goods (Freecycle). Beyond that, a little creative thinking goes a long way. On her blog, Ristow frequently shows off the many uses for Mason jars — from a place to store homemade lip balm to a planter for sprouts in the kitchen. She also makes reusable cotton rounds for makeup removal from upcycled flannel fabric. If your washable organic napkins become stained from use, you can extend their lifecycle the way Singer does: by repurposing them as an alternative to the plastic wrapping typically used to store lettuce and other greens in the fridge.

Ristow advises getting acquainted with the world of lifecycling by taking small steps at first. She began her sustainability journey by bringing reusable bags to the grocery store and making a general effort to recycle more. When that became habitual, Ristow then began bringing her own glass jars to store things like deli items and takeout, too. She also points out that most coffee shops use non-recyclable, plastic-lined cups. “So a simple, easy, one-time change is to bring your own reusable mug,” she said. “And there you have it: one less coffee cup in the landfill.”