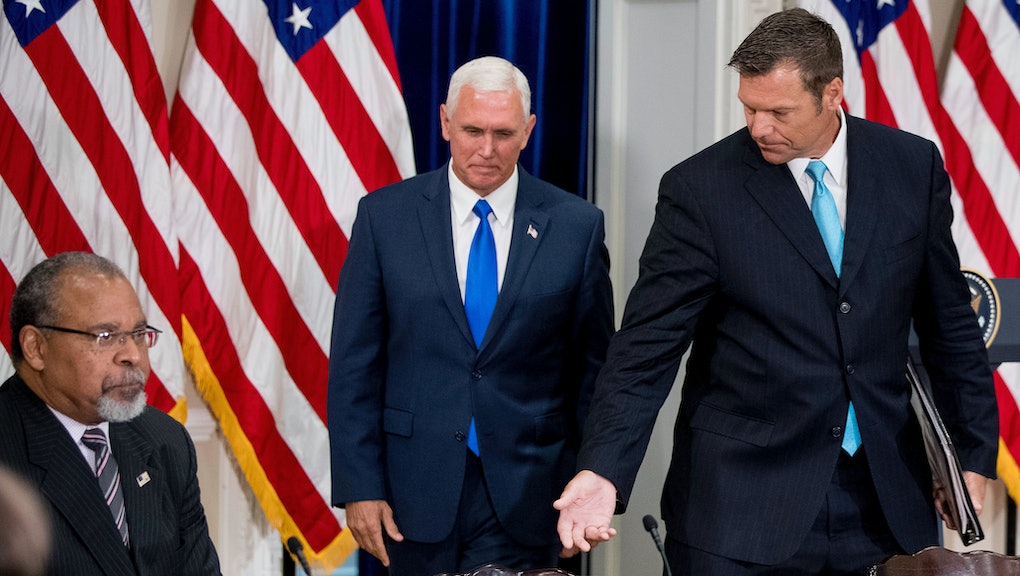 He’s back — and now he’s trying to make it more personal.

Lawsuits quickly piled up, with one filed by the Electronic Privacy Information Center stalling the panel’s efforts to secure the data.

But after a Monday court win, Kobach, the Kansas secretary of state and a candidate for governor, sent a new letter.

In the version sent to California Secretary of State Alex Padilla, a commission critic who refused to cooperate in the first round, Kobach took pains to make clear that voters’ data wouldn’t be at risk.

Kobach wrote to not only ask for the information again, but “to answer questions some states raised about the request’s scope and the commission’s intent regarding its use of the registration records,” according to a copy of the letter provided to Mic by Padilla’s office.

“Like you, I serve as the chief election official of my state. And like you, ensuring the privacy and security of any non-public voter information is a high priority,” Kobach wrote in a marked contrast to the more combative tones that marked earlier exchanges about the panel.

“I want to assure you that the commission will not publicly release any personally identifiable information regarding any individual voter or any group of voters from the voter registration records you submit,” he said.

Kobach promised that “the only information that will be made public are statistical conclusions drawn from the data,” other observations and communications between the commission and elections officials.

That promise raised eyebrows with observers suspicious of the panel and the motivations of Kobach, who was recently fined by a judge for misleading the court in a voting rights case involving the American Civil Liberties Union.

The Kansas Republican also said a secure portal has been arranged to transmit the information. When the work is done, he vowed on the letter’s second page, “the commission will dispose of the data as permitted by federal law.”

“Once again, the president’s sham election commission has requested California voters’ personal data. Once again, my response is no,” he said in an emailed statement.

“The commission’s new request does nothing to address the fundamental problems with the commission’s illegitimate origins, questionable mission or the preconceived and harmful views on voting rights that many of its commissioners have advanced,” Padilla said.

“Let me reassure voters: I will not provide this commission with Californians’ personal voter data. I will continue to do everything in my power to protect California citizens’ ability to exercise their rights to register and vote free of barriers and intimidation.”

In a separate, more formal statement, the Kentucky secretary said she’d “work with the commission on improving election administration across the country if that means making the ballot box more accessible to every eligible American,” but still had caveats.

The secretaries of state stand with other skeptical administrators who have said the law does not allow them to provide all the data the commission wants.

Critics of the panel say it’s a put-up job meant to bolster Trump’s unproven (and widely disputed) claim that millions of illegal votes were cast in the 2016 election and to push for tighter voting laws.

Panel supporters say that with dead people remaining on voter rolls for years and non-citizens registering in an age of close races, fraud is a threat to democracy.