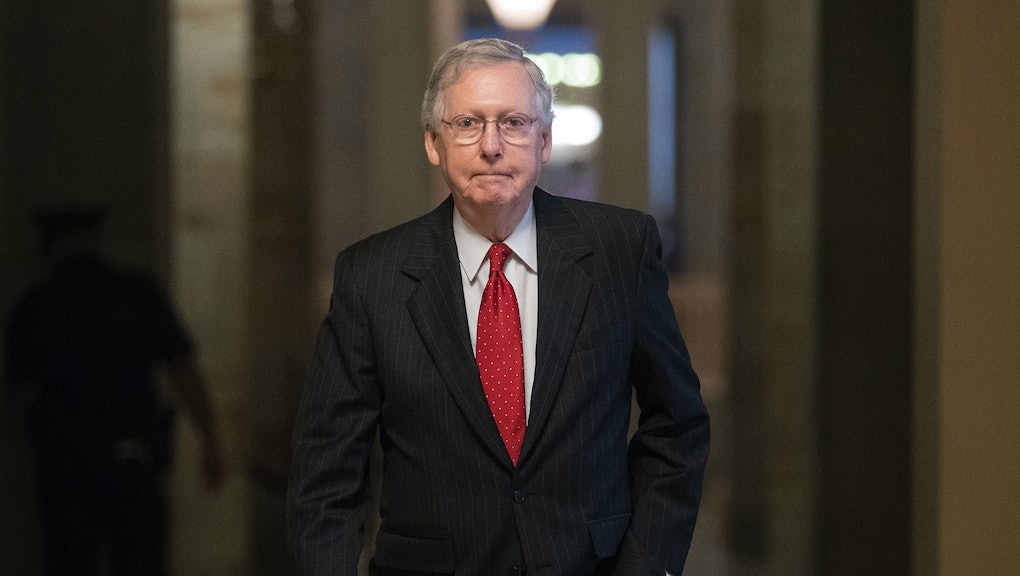 What is a skinny repeal? Senate Republicans’ last-ditch effort to repeal Obamacare explained

As debate winds down on Senate Republicans’ effort to repeal and replace the Affordable Care Act, GOP leaders are frantically trying to cobble together a plan — any plan — that can save their seven-year promise to dismantle former President Barack Obama’s signature domestic achievement.

Two other plans have already failed miserably due to lack of GOP support: a straight repeal plan and a more comprehensive proposal that would have repealed and replaced parts of the ACA, better known as Obamacare.

So Republicans are now scaling back their expectations, seeking to pass what they’re describing as a “skinny repeal” bill. They have given few details of what exactly the skinny repeal would include, which has led to frustration within the Senate GOP conference.

“Everybody keeps asking me if I’m going to support the ‘skinny repeal’ amendment to which I say, I have no idea what’s going to be in it,” Sen. Susan Collins (R-Maine) said in an interview on Wednesday.

But so far, the suggestion is the skinny repeal would nix the ACA’s individual mandate, which requires Americans to have health insurance or else face a tax penalty, and get rid of a tax on medical devices.

Senate Republican leadership says the skinny repeal is basically a placeholder, allowing the Senate to merely pass something so they can conference with the House to come up with a more comprehensive piece of legislation that can pass both chambers.

But coming up with a compromise bill with the House is far from guaranteed — especially since the Republican Party has had seven years to come up with a proposal and still doesn’t have a piece of legislation that delivers on their promise to provide more affordable coverage.

And while Senate Republicans are painting the skinny repeal as a less dramatic version of the repeal plan that failed on Wednesday, nixing the individual mandate would have wide reaching negative impacts that could implode the individual health care market.

The non-partisan Congressional Budget Office estimates that a skinny repeal would cause 16 million more people to lose insurance, and would raise premiums by 20%.

It’s hard to overstate the hypocrisy involved in Republicans passing a law raising insurance premiums: Unaffordable premiums have been one of the GOP’s biggest attacks on Obamacare.

Yet both the CBO and insurance companies that offer plans in the individual health care marketplaces are warning that eliminating the mandate would lead to increasing costs.

The reason is that the mandate encourages healthy people to purchase health insurance. Those healthy customers’ premiums would subsidize the cost for the sicker Americans with pre-existing conditions who purchase health care.

If healthy people aren’t buying health care, insurers wind up with a sicker insurance pool that is more expensive to cover. The sicker the pool, the higher the costs — which are then passed down to the consumer.

Insurance companies and health care organizations such as the American Medical Association are warning Republicans about this.

“Eliminating the mandate to obtain coverage only exacerbates the affordability problem that critics say they want to address,” David O. Barbe, president of the AMA, said in a statement on Wednesday. “Instead, it leads to adverse selection that would increase premiums and destabilize the individual market.”

“In order to ensure a stable individual insurance marketplace, any final legislation must include these crucial elements to avoid steep premium increase and diminished choices that would make coverage unaffordable and inaccessible,” the BCBSA said in a Wednesday statement, referring to the individual mandate.

A bipartisan group of governors has also come out against the skinny repeal for the same reason.

For now, it’s unclear whether Senate Republicans have the support to pass the skinny repeal.

Debate on the health care bill is expected to wrap up as early as Thursday afternoon.