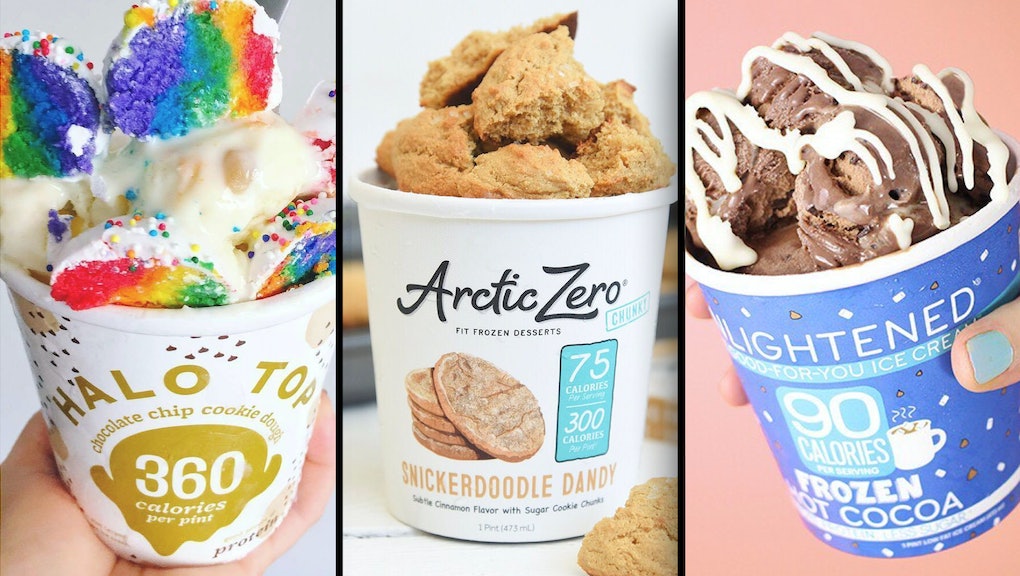 When I learned that a pint of Halo Top — one of the many poster children of the modern better-for-you ice cream wave — clocks in at a mere 240 calories, I felt positively giddy. But then I ate some, and it actually turned out to taste like, well, ice, and it had the texture of packing peanuts. But I just kept eating, probably because there’s something that feels so bad, yet so good about nearing the bottom of a cardboard pint.

The ice cream industry is seeing lucrative success: The past year’s sales totaled $6.6 billion, up 3.4% from the previous year, according to Nielsen. But, it’s these “healthy” items that are carrying the weight of ice cream’s profit: “Healthy” ice cream products, that is those deemed “healthy” by the Food and Drug Administration (based on providing some vitamin content and not having too much saturated fat or sodium) grew by 85% in 2016.

What’s driving us to buy these so-called “nice-cream” products?

“Consumers are paying attention to attributes of products as part of a broader push toward transparency,” Andrew Mandzy, director of health and wellness strategic insights for Nielsen, said in an interview. “We know that 68% are willing to pay more for products that don’t contain undesirable ingredients.”

In other words, even when indulging — from cocktails to cookies — people want to feel less bad than they do when consuming standard “cheat” food.

“There has always been a desire to take indulgent things and make them healthy,” Mandzy said. We’ve had sherbet and sugar-free pints, SkinnyCow and Weight Watchers on the shelves for years. “It’s just a matter of what is defined as healthy that’s different. [Today it’s about] understanding what’s actually in the product — dairy-free, hormone-free and antibiotic free, or are there artificial ingredients.”

So, what counts as healthy?

Throughout American history, a perceived absence of evil has been a powerful driver of our food choices. Think fat-free and low-calorie, non-GMO and gluten-free. Lactaid, for one, isn’t shy about lactose-free being its primary virtue.

Many free-from claims carry what’s called a “health halo,” meaning that certain labels give the impression that a product must be better as a whole. Take the concept of reduced fat, for instance. Seeing that claim on a package makes us think the item is higher in quality, lower in calories and more natural and we’re likely to eat more of it than the original version.

When looking at the removed fat, though, we often overlook what replaces it (sugar, salt, weird thickeners and additives). The substitutes are often worse for us than the apparent offenders. And what changes over time is merely the roster of nutritional demons and darlings du jour.

The perceived meaning of “healthy,” then, is really in the spoon of the beholder.

Today, the product claim with the highest growth is “good source of protein” —by a long shot, in fact, at a 207% increase versus last year. Ice cream might seem like an odd place to seek your protein, but then again, so might bottled water or cereal, brands of which have also been reformulated to market high protein content. Despite almost no one in the U.S. failing to consume enough daily protein, nearly 60% of us are looking to increase our protein intake, according to consumer insights firm the Hartman Group.

Enlightened is one brand banking on the protein bonanza. Offered in such varieties as birthday cake, red velvet and sea salt caramel, Enlightened’s main health pitch is more protein than sugar in a pint. That said, the calorie figure still gets the most packaging real estate. “Calories, from a marketing perspective, are the easiest way to capture consumers’ attention,” Michael Shoretz, CEO and founder of Enlightened, said in a phone interview.

Lower calorie counts still appear key because they pull the many consumers plagued by guilt. “Classically, we have this sense that, if I eat a lot of ice cream, I feel bad and need to make up for it in some way,” said Shoretz. A former personal trainer, many of his gym clients would ask how much they’d have to work out to burn off the pint of Ben & Jerry’s they’d downed the night before. “Obviously, it was a lot,” Shoretz said.

“There’s a level of excitement around the naughtiness of eating a full pint of ice cream,” Shortez said about Enlightened. People posting about their whole-pint-in-one-sitting consumption has been a major driver of the brand’s popularity on social media, Shortez said. Clearly, there’s an experience we relish here, like it’s almost too good to be true.

The trouble is, it all just might be too good to be true. Oftentimes, treats made “healthier” are lose-lose: They aren’t as healthy as, say, abstaining from the truly indulgent treat you crave — or as healthy as eating something genuinely healthy like whole fruit for dessert instead — yet they don’t taste nearly as good or satisfy the craving for that truly indulgent treat you wanted. Ultimately, this might lead many of us to consume even more calories to compensate.

The next time a hankering for ice cream strikes, consider taking a moment to think about what you’re really craving: Is it something sweet, something cold or something that you can mindlessly eat an entire pint of? Figuring out the root of what’s driving you to the freezer could be the key to finding real satisfaction.