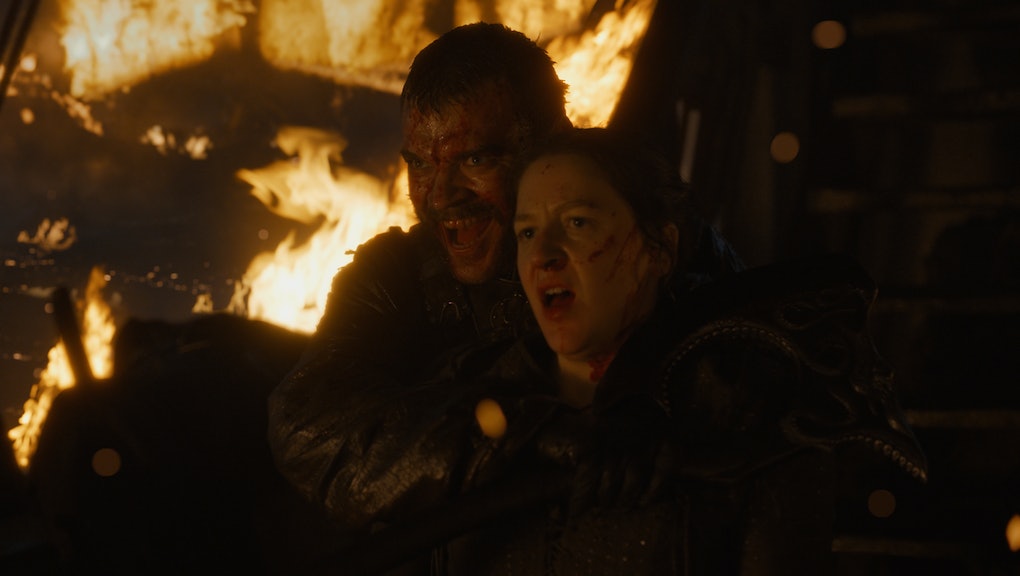 In defense of Euron Greyjoy, the ‘Game of Thrones’ character you should love to hate

As much as Game of Thrones seems defined by its fire-breathing dragons, ice zombies and, most recently, time travel, the heart of the show is its complex human characters. Enter Jon Snow, the know-nothing bastard who becomes a reluctant, but triumphant, leader of men; Arya Stark, a girl contemplating the necessity of vengeance, and the sacrifices it entails; Daenerys Targaryen, shouter of things.

Just as important are Thrones’ non-fantastical villains. The petulant King Joffrey (Jack Gleeson) was the first to take up the mantle, a reviled character viewers were only happy to see when someone else was slapping him. Suffice to say, when Joffrey was poisoned at his own wedding, only Cersei Lannister was devastated. Then came Ramsay Bolton (Iwan Rheon), who was so terrible he was once deemed the worst character on television. Unlike Joffrey, there were no moments of levity with Ramsay; every time he graced the screen you prepared for the worst. He was always busy with something appalling — he tortured people, raped women, fed an infant to his hounds — until Jon Snow triumphantly beat the shit out of him at the end of season six.

But with Ramsay dead and Thrones entering its penultimate season this summer, the series needed another villain — a stopgap ahead of the presumed big bad for the final season, the White Walkers. (Though I’m a believer that Dany might end up being the biggest villain of them all.) And here comes — perhaps straight from a Nine Inch Nails concert, judging from his eyeliner and outfit — a revamped, charismatic and gleefully murderous Euron Greyjoy (Pilou Asbæk).

In two episodes, Euron has been vital in changing Westeros’, well, game of thrones. He’s become a much-needed ally to Cersei, with his impressive armada (the seeds for their alliance were planted in a scene where Asbæk absolutely feasts on all the scenery in sight), and he’s dealt a devastating blow to Dany’s ambitions for the crown by intercepting Yara Greyjoy’s fleet. He murdered two of the show’s three Sand Snakes, in a moment that was contentious because of its brutality but necessary for the sake of eliminating Thrones’ weakest subplot. Ever the showman, Asbæk has assured fans that Euron’s actions this season will make Ramsay “look like a little kid.” It’s a bold declaration on behalf of a character that barely made an impression in his on-screen debut.

Euron was technically introduced in season six, coming out of nowhere to kill his brother, Balon Greyjoy, and take the Salt Throne for himself. But the Euron we briefly met in season six is a far cry from the guy who shows up in Westeros to court Cersei in the season seven premiere. In his debut season, Euron was one-note and surprisingly bland in his ambition to lead the Greyjoys and wipe out Yara and Theon Greyjoy. (They rather unceremoniously escaped his grasp during the Greyjoys’ arcane crowning ritual, which involved Euron being drowned in seawater and then resuscitated.)

And in the overall scheme of season six, Euron was a footnote in the series’ main story, which culminated with the highly touted Battle of the Bastards and Cersei blowing up a good chunk of the cast at King’s Landing in one fell, fiery swoop. So yes, Euron suddenly getting a makeover and becoming Thrones’ big bad does seem a touch out of place, even somewhat unnecessary. But the way Thrones is framing him this season makes it very clear: He’s the kind of character you’re supposed to love to hate. We’re all in on the joke that this guy is a colossal douchebag.

When he shows up in King’s Landing and proposes to Cersei, he looks like, as Uproxx’s Brian Grubb accurately notes, “a guy who went to Australia once five years ago and still calls everyone ‘mate.’” He suggests she try out fratricide when Jaime Lannister’s standing right there (“It feels wonderful!”). He can’t stop grinning at everyone — even the zombie-like Mountain who crushes skulls with his bare hands. He seems utterly convinced that he’s swooning Cersei, whose interest comes from desperation, not romance. His ego is as inflated as the towering mast on his prized ship, the Silence.

Speaking of which: Consider the way co-showrunner D.B. Weiss describes the Silence in a featurette on the second episode’s explosive naval battle. “The boat itself is a projection of the personality of the man who built it,” he says. “It’s a big ‘fuck you’ boat by a big ‘fuck you’ guy.” Asbæk, also interviewed in the featurette, speaks in the first-person as if he actually is Euron and even pokes fun at the size of the ship, addressing whether Euron is overcompensating for something else. “I don’t think it has nothing to do with ... you know what they say about guys with big cars,” Asbæk says, barely holding in a huge grin.

The TV version of Euron is, essentially, the embodiment of the worst person you knew in high school inexplicably making it big. And it’s actually a pretty noticeable departure — at least thus far — from the Euron in the books, who exudes a more Ramsay-esque personality, but with an added fascination with dark magic and the occult. Theories even sprung out that the book version of Euron could, somehow, broker an alliance with the White Walkers. (Imagine TV Euron doing the same — the Night King would probably pop an ice vein after a single meeting with the guy.)

It was a smart move for Weiss and fellow showrunner David Benioff to tinker with Euron’s onscreen personality. Ramsay’s stint on the show was a tortuous slog; aside from being a total sadist, he was seemingly invincible up until the moment Jon punched him in the face and Sansa fed him to his own dogs. And even though Ramsay’s defeat was definitely cathartic — it was a moment years in the making — it didn’t rid Thrones of the ugly stain he left in his wake, including the show’s most controversial scene: Ramsay raping Sansa on their wedding night, which prompted a boycott of the series from some female viewers.

Euron is also pretty evil — he’s a maniacal dude who seems happiest in the heat of battle with blood spattered over his body, or when he’s owning Jaime to his face (Euron’s got TWO good hands!). But he’s a different breed of villain; he isn’t petty and childish like Joffrey, he isn’t unrelentingly dour and cruel a la Ramsay and he isn’t an icy manifestation of evil like the Night King.

He’s the biggest douche in Westeros — and he wants you to notice, if you haven’t already.