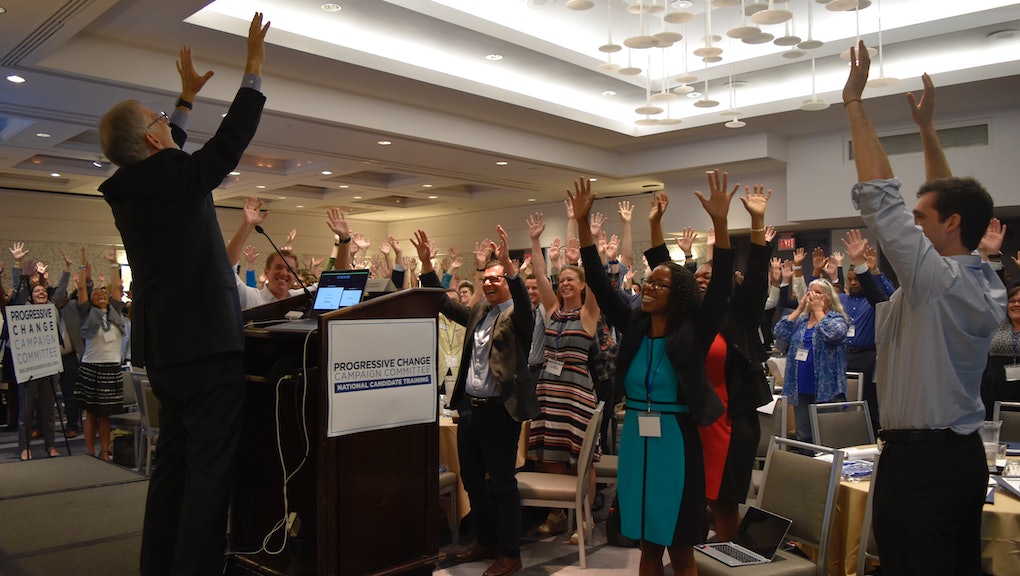 WASHINGTON — In the wake of President Donald Trump’s election, Democrats have faced a common question: Can they channel the energy of the anti-Trump resistance into beating Republicans in 2018?

Joel Silberman insists that the answer is yes — but only if candidates stick to an uncompromising progressive message. “I believe that I want to piss off the opposition as much as possible,” Silberman, a progressive messaging expert, said to a crowd of hundreds of novice candidates gathered in an underground hotel conference room on Thursday. “I want them to be so angry they repeat my message over and over.”

Silberman was speaking at day one of a national candidate training program put on by the Progressive Change Campaign Committee, which works to elect progressives from city halls to Congress. Up to 300 candidates from 40 states who have pledged to advance progressive policies are expected to attend the four-day training in downtown Washington, D.C.

“Someone who is an activist in their community doesn’t necessarily know what to do to run for office and win,” PCCC co-founder Stephanie Taylor said. “Candidates can go through these exercises, build confidence and go back home and do these things for themselves.”

Taylor and her co-founder Adam Green acknowledge Democrats have an opportunity to win state House races in 2017 and take back the U.S. House in 2018. But for that to happen, the grassroots enthusiasm for politics must turn into phone calls, door knocks, online contributions and more.

That’s why conference organizers made sure to sweat the details. Seventy-one percent of the attendees were first-time candidates or challenging incumbents, creating a need for simple services like logo creation or website domain purchasing.

In one session, candidates for offices from town council to Congress discussed the best tone to use when asking a donor for money over the phone. They strategized over the ideal method for converting house party attendees into donors.

Elsewhere, these fledgling politicians learned how to build fundraising ads for Facebook based off the online fundraising success of Sen. Bernie Sanders (I-Vt.). Candidates used exercises to hone the five elements of their stump speech and ran tough questions by campaign pros.

The PCCC, which was founded in 2009, sees itself as the organization experienced with campaigns and training that can help upstart successes like Indivisible, which co-sponsored the candidate training, and convert hyper-local energy into electoral results.

There has already been an undeniable surge of interest in running for federal office. As of June 30, 209 Democratic House candidates for 2018 had already raised at least $5,000 — a 475% increase over the the same time in 2015. More than 60 of the 300 PCCC candidates plan to run for House seats. The 300 attendees are nearly double the number that participated in the last training in 2015.

“I believe that I want to piss off the opposition as much as possible. I want them to be so angry they repeat my message over and over.”

That interest extends to 2017 races in key states. In Virginia, Democrats are fielding candidates in 88 of the 100 races for the House of Delegates. The PCCC has held trainings for state-level candidates there, as well as in New Jersey and North Carolina, which will also hold state-level races this fall.

Teddy Smyth coordinated the PCCC’s involvement in 2017 Virginia and North Carolina state-level races. For the first time, the PCCC systematically endorsed state-level candidates in state-level primaries to place value on the importance of down-ballot races.

The five candidates the PCCC endorsed in Virginia primaries all won.

“We need to have a better pipeline of candidates to elect the bold, progressive leadership we want to see on the national level,” Smyth said. He now works for one of the PCCC-backed primary candidates who beat her opponent by 14 votes.

Taylor said the PCCC has a responsibility to work in races that the Democratic party may not view as competitive. “We believe we should take on long shot races, that we should be competitive with Republicans in places that are hard,” she said.

On paper, the “long shot” label certainly applies to Jim Keady. The progressive is challenging Rep. Chris Smith (R-N.J.) who has represented New Jersey’s fourth district since 1981. Smith won re-election in 2016 by a 30-point margin.

“We should concede no territory,” Keady said of his race. “I am unapologetically bold and progressive.”

Instead of seeking support from the state Democratic party, the bar owner and former soccer coach who spurned Nike for its use of sweatshops says local chapters of Indivisible, ActionTogether, the Working Families Party and others are providing his candidacy with grassroots support.

Tina Marie Manus found herself at the training seeking a support network. Manus is the councilor for District 10 in Stratford, Connecticut. She was elected in 2015 and faces a primary challenge in September from a fellow Democrat before a re-election fight against a Republican this fall.

Manus said the training’s focus on grassroots organizing will help her mobilize progressives to oppose conservative forces shaping her town. “We may lose these battles, but we need to plan to win the war,” she said.

While the training’s focus was often on how to win local races, the significance of the national health care debate playing out less than a mile from the training was felt by the candidates. Sanders had to cancel his planned lunchtime keynote address. Sen. Elizabeth Warren (D-Mass.) made it, but only after a scheduling change.

As Warren rallied the candidates at the end of seven hours of sessions, she listed off the issues that are core to her constituency: debt-free college, Medicare-for-all, corporate accountability and more.

“The world has changed,” Warren said as she urged candidates to run for office. “Why did it change? It changed because of us. I don’t mean at Capitol Hill, I mean on the ground.”

That drew a standing ovation from the crowd of loyalists. The PCCC ran the Draft Elizabeth Warren for Senate campaign in 2011 and raised more than $1.1 million for her election bid.

Progressives like Warren believe the Democrats must proudly embrace the movement. The PCCC supports the direction congressional Democrats moved with their “Better Deal” messaging rollout earlier this week, but the group also cited polling that showed a majority of voters in states with key Senate races in 2018 believe Trump “is fighting more for regular working families” — a mantle the progressives want for themselves.

“We’ve allowed Donald Trump and the Republicans to seize the populist mantle, while really they’re looking out for the interests of the millionaires and the billionaires,” Smyth said. “We need to take that mantle back.”