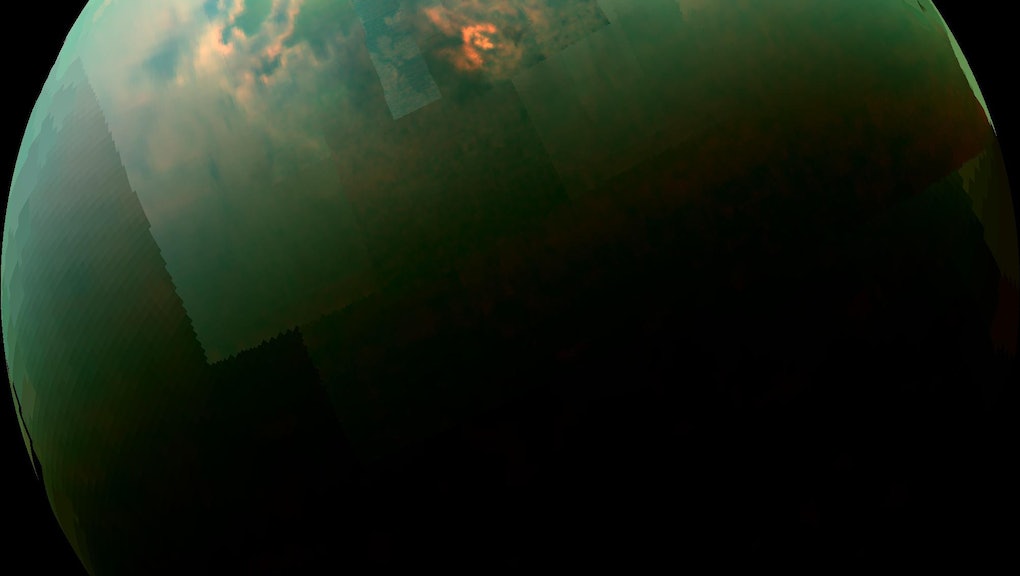 One of the challenges in looking for life on other planets is we don’t necessarily know what we’re looking for. Water definitely seems important. A planet’s star has something to do it. And we’re carbon-based, so maybe other life is too — or maybe not.

But if we’re looking for carbon-based life, scientists pondering one of Saturn’s moons just spotted some very interesting chemicals, floating way up above the surface in the moon’s atmosphere.

Titan is Saturn’s largest moon — larger, in fact, than both Earth’s moon and Mercury. It has intrigued scientists with its un-moon-like dense, cloudy atmosphere of nitrogen (that’s the biggest piece of our atmosphere here on Earth) and methane. Particularly intriguing is the phenomenon where that methane falls to the surface like rain and forms rivers and lakes across the moon’s surface.

The Cassini mission, which ends in September, has given scientists an incredible look at this massive moon. Among its collection of cameras and gadgets that measure energy is a device called the Cassini Plasma Spectrometer, which is specially tuned to look for charged particles.

On Wednesday, a team of scientists published a new paper in the Astrophysical Journal Letters based on some of the Cassini Plasma Spectrometer’s data, reporting that the instrument spotted what’s called carbon chain anions.

Let’s break that down. Carbon is carbon, of course, the key element in you and your cat and all other life on Earth. Chain means it’s a small molecule, built from a backbone of up to a half dozen carbon atoms tacked together like a necklace. And anion means it has a negative charge because it has picked up some extra electrons.

The carbon chain anions caught the team’s eye because they can be put together like Legos to form larger organic molecules, like those that are necessary for life as we know it. It’s also unusual that negatively charged particles stay that way in an environment like Titan’s upper atmosphere.

But nevertheless, there they were, formed by energy from the sun rearranging atoms from molecules of nitrogen and methane. And the scientists think these anions, which are more common higher in the atmosphere, may be combining and sinking to create the orange-ish haze that surrounds the moon.

The researchers want to pin down whether that’s happening, as well as look for similar processes on Pluto and Neptune’s moon Triton, which both also have atmospheres made up of nitrogen and methane.