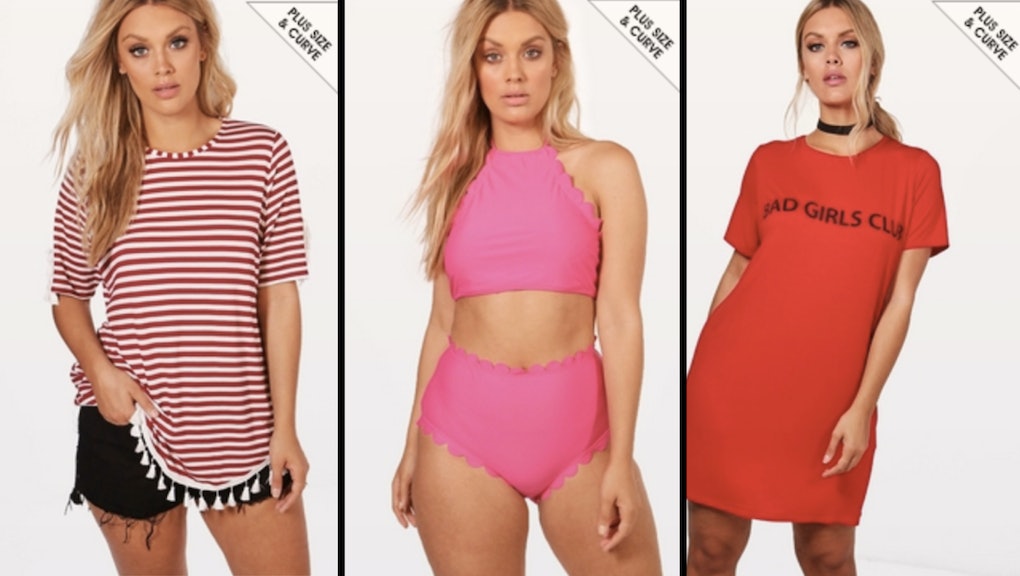 Finding plus-size models to model plus-size clothing isn’ hard — so why do some retailers struggle?

This week, customers of Boohoo, the massive British online retailer akin to Asos with its own curve clothing line, were sent into a rage spiral upon realizing that they really didn’t think the model modeling their plus-size swimsuits was actually plus size.

“Anyone else majorly offended that this is a ‘plus-size’ bikini on a ‘plus-size model?!?!” one Twitter user wrote. “No wonder girls think they are ‘fat.’”

Plenty other women chimed in too, writing that they’d noticed how thin the plus-size models Boohoo is using are.

According to Boohoo’s site, this model is a U.K. size 16, which is within the plus-size range, but to many customers, she didn’t look it. Boohoo’s plus-size range, after all, goes up to a 20, and it looks as though all the models Boohoo uses to show off its curve line are on the thinner side.

That too caused outrage, and Athleta ended up apologizing. “This is a place where we can do better,” their statement read. “The positive portrayal of women in the media is very important to us. We celebrate women of all body shapes, sizes, ethnicities and ages across our stores, website, campaigns and social media channels.”

Yet Athleta has still made no changes to its website.

This is insulting for a number of reasons, first being: Finding a plus-size or curve model is not hard — at all.

There are entire sections of massive agencies like Wilhelmina, IMG and Milk dedicated to plus-size and curve models. And if you don’t feel like scrolling through those, there are plenty of sites that stand as good references for what it looks like to have more diverse, curvaceous women modeling plus-size and curve clothing. There’s Lane Bryant and ModCloth and Asos and Torrid and even the very new retailer Premme, which all show many great and different curve and plus-size models working it and working it well.

Another problem with this idea that plus-size women can’t even get cast to model plus-size clothes is that it’s another hit to the already slim representation plus-size women get. Just 2.3% of ad campaigns in spring 2017 show plus-size women. You’d think if a retailer wanted to show off its plus-size or curve collection, they’d want to use those models, who are so underutilized in this industry, but some apparently don’t.

The most concerning part of this idea that women who aren’t a size 12 or larger are indeed modeling these plus-size clothes is that it reinforces a beauty ideal for plus-size women.

Even in an industry that’s supposed to be body positive, plus-size models have their own beauty standard, where they’re supposed to be curvy only in the right places (read: busts and hips and butt) and not, say, in their stomach.

“They want the aesthetic of that very thin, angular bone structure in the face that might come with someone who’s on the smaller side, but they know they have to fill those clothes in order to fill those sizes,” Natalie Abruzzo, who made a documentary about the plus-size industry called The Sixty-Six Percent, said in a previous interview. “So they pad — they add extra padding.”

Using a model who’s a size 6 in plus-size clothing makes women think they are still not good enough. Though you may think of it as a small issue now, consider what it’d be like to regularly scroll through fashion retailer websites and see an array of women who have bigger hips or stomachs or thighs.

“If these casting people include women who have a big stomach and are above a size 16, or a pear shape or apple shape or whatever, and [they] say, ‘You know what? This person can look great in clothes too,’” Jenna Lee, a model who wears a size 16 to 18, said in a previous interview. “Girls will see that in the mall or [on the] internet and know that it’s OK for them to feel good and dress nice. Then others will see that too and won’t have a judgement about what these women can and can’t do.”