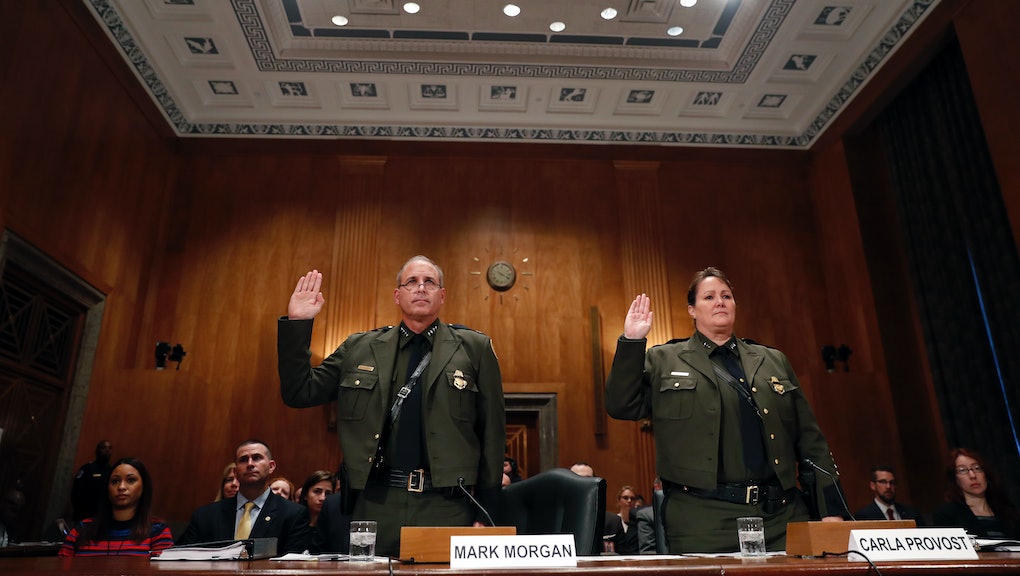 Will adding more women to Border Patrol help the agency shed its reputation for violence?

In April, Carla Provost — who’d been sworn in as deputy chief of U.S. Border Patrol just five months earlier — became the agency’s acting chief, making her the first woman ever to hold the position.

At an event Tuesday honoring the 42nd anniversary of women joining the agency, Provost had a message for the women in attendance: There is no better time to be a woman on the force, but there are still far too few of them.

“We have to do a better job,” she said, according to the New York Times.

The Times reported that women only hold 939 of Border Patrol’s 18,276 agent positions, accounting for just 5% of the agency. But for those who worry about Border Patrol’s lengthy history of allegations of excessive force and sexual violence, diversity in the agency isn’t exactly a top concern.

“Integrating women into this organization doesn’t change the fact that its policies negatively impact the lives of women across the world. It simply means women will participate in that process,” Kim Tran, the executive publisher at Third Woman Press: Queer and Feminist of Color Publishing, told Mic via email Friday. “That’s the limit of reforming a body with this specific goal.”

Officials with Customs and Border Patrol did not immediately return messages seeking comment.

Some worry the agency’s reputation of violence will only get worse under President Donald Trump, who has ambitious goals to expand the agency. On his fifth day in office, Trump signed an executive order that included mandates to hire 5,000 Border Patrol agents and 10,000 Immigration and Customs Enforcement officers.

Catherine Sanz, the executive director of Women in Federal Law Enforcement, believes that adding more women among those ranks could be the answer to concerns over a larger and potentially more aggressive Border Patrol agency.

“The higher the percentage of women you have in agencies, the lower the number of civil rights violations that agency incurs, the lower the lawsuits file suits filed, the lower the payouts,” Sanz said in a Thursday phone interview with Mic. “Women use the appropriate level of force, not excessive force.”

WILFE’s research backs her up: The group released a report in September 2016 that said female police officers rely more heavily on interpersonal and communication skills to de-escalate confrontations. In other words, the report found, women officers “almost never use excessive force.”

“The difference between a male and a female agent entering on the scene does have an impact,” Sanz said. “With Border Patrol, you deal with a lot of women and children crossing the border, and they’re often victimized along the way. When they think of a border patrol agent, they’re probably thinking of this big tall guy with muscles. But then they get this 5’3” woman, and it changes the perception of what’s going on. The situation can relax, and when people are relaxed, they can hear what’s being said to them.”

Still, Sanz said it takes more than one female head and 939 female agents to make a difference. According to her research, law enforcement agencies must be made up of at least 30% women to begin to reap the rewards of their particular skill sets.

“The problem for [Border Patrol] will be public perception; that change is not happening fast enough,” Sanz said. “Even if you go from 5% to 10% women — 10 isn’t enough to have a big enough impact on anything in any agency. It will take a lot to get there. It has to be Provost and dozens of other women.”

Reece Jones, the author of Violent Borders, declined to speculate on the impact women could have on Border Patrol, but he did point out some of the laws all Border Patrol agents operate under that beget violence.

“Really flexible rules in very remote areas without any oversight has resulted in an agency a lot of people have describe as out of control,” Jones said in a phone interview Friday.

In 1975, the U.S. Supreme Court ruled that Border Patrol agents did not have to observe the Fourth Amendment, which secures rights against unreasonable search and seizure. And while former President Barack Obama’s administration set out to curtail racial profiling at the border, government officials announced in 2014 that agents are still allowed to “consider race and ethnicity” when stopping people at the country’s entry points. Post 9/11, the U.S. also pivoted to treating Border Patrol as its first defense against terrorism, which Jones said has led to a “militarization” of the agency, breeding more violence and abuses of power.

“Many people have suggested that the mentality after 9/11 to focus on terrorism has resulted in a lot more violence in the border lands and rough interactions with people agents encounter,” Jones said.

More recently, efforts to militarize Border Patrol have ramped up, with Sens. Jeff Flake (R-Ariz.), John McCain (R-Ariz.) and Ron Johnson (R-Wisc.) proposing the Boots on the Border Act in March. The legislation would essentially make it easier for former members of law enforcement and the military to start careers as Border Patrol agents and CPB officers. Trump’s efforts to scale up CBP in a relatively short time frame, Jones said, will likely also have the effect of exacerbating many of the agency’s core issues.

Tran thinks these conditions make it extremely difficult — if not impossible — for any one group of people in the agency to create significant change.

“There’s a great — but not exact — analogy to be made here between hiring more women in border patrol and hiring people of color as police officers,” Tran said. “While there’s great evidence that excessive use of force can be curbed when marginalized people are integrated into bodies of state authority, the fundamental purpose or intention of the institution itself remains the same.”

Katherine Spillar, the executive director of Feminist Majority Foundation — a nonprofit that also includes the National Center for Women and Policing — said it’s a fair critique, but it helps to be realistic.

“There’s always going to be police departments and border patrol — none of that’s going away,” Spillar said in a Friday phone interview.

Spillar thinks decades of research, as well as anecdotal evidence, speaks for itself: Women, she said, have the power to transform the institutions they operate within.

“We have to figure out what to do to restructure and change these agencies. The only way to do that is to change the people involved,” Spillar said.

“There’s only one way to do that,” she continued. “Hire women.”