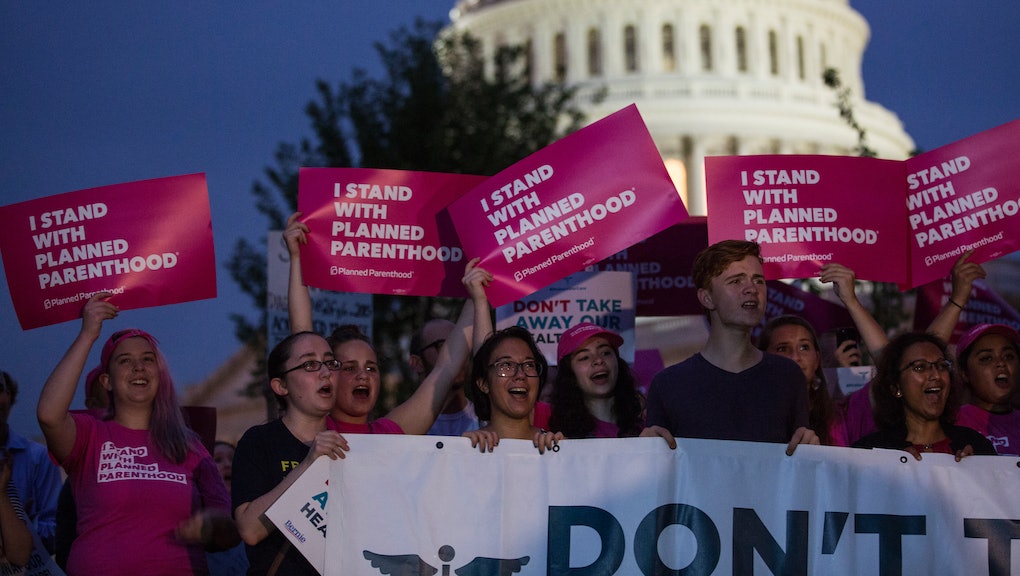 The “skinny repeal” might be dead, but the fight for abortion rights rages on

The Senate Republicans’ so-called skinny repeal is dead. The slimmed-down plan to “repeal and replace” the Affordable Care Act floundered in an early morning vote on Friday, thanks to three resounding “nos” from two GOP women — Sens. Lisa Murkowski and Susan Collins — plus Sen. John McCain.

Women have reason to celebrate: For now, an eminent, yearlong cessation of federal funds to Planned Parenthood has been dodged. The health care organization estimates will allow it to serve 8,118 people at health centers across the country on Friday — patients who otherwise would have been blocked from accessing things like pap smears, contraception, pregnancy tests, cancer and STI screenings, HIV testing, hormone replacement therapy and pelvic exams.

The skinny repeal would have allocated more money to community health centers, true, but those doctors and clinics would never have been able to fill the hole Planned Parenthood closures left. For now, they won’t have to try.

Pregnant people waking up on Friday may have been heartened to hear that essential benefits coverage will remain intact, meaning insurers can’t decline to cover things like maternity care.

For all these reasons and more, women’s health advocates are heralding the no vote as a victory. Dr. Willie Parker, board chair of Physicians for Reproductive Health, said in a statement that the “country narrowly averted a public health disaster.” Planned Parenthood praised women for their role in that aversion.

“Women stopped this bill in its tracks,” Planned Parenthood Federation of America President Cecile Richards said in a statement, attributing the win to women-led marches, rallies and efforts to reach congresspeople.

“Against all odds, grassroots organizing defeated Trumpcare,” she continued. “We know this is the beginning, not the end, of fighting for what we believe in — but it’s a big step forward.”

And certainly, the skinny repeal’s death knell is that. In each of its many iterations, the GOP health plan looked bad, especially for women. But while the bill may be out for the count, we can expect that Republicans will try again. And we can reasonably expect that, when they do, reproductive health care will be among the first items placed on the chopping block.

At a federal level, congressional Republicans have been working to “defund Planned Parenthood,” as they are so fond of saying, for years. Emboldened by President Donald Trump and his abortion-unfriendly administration, and by the possibility that the U.S. Supreme Court could shortly skew conservative enough to possibly overturn Roe v. Wade, GOP lawmakers are finally enjoying their moment in the sun.

But even if their next health care proposal fails to address Planned Parenthood, let’s not forget about the war being waged on the state level. In Iowa, in Texas, in Missouri, in conservative states across the country, the effort to take down the country’s “largest abortion provider,” as Planned Parenthood opponents call the organization, is as strong as ever. By mid-March, (mostly white, male) state lawmakers had already introduced 168 anti-abortion bills.

Those who are concerned about the status of reproductive health should not take their eyes off Oklahoma, Alaska or Florida, because even if the federal government takes a breather, individual states will still be working — in special legislative sessions and when their legislatures reconvene after summer recess — to roll back access to basic reproductive health care. Which may be why Richards, in her celebratory statement, reminded readers that the job isn’t done.