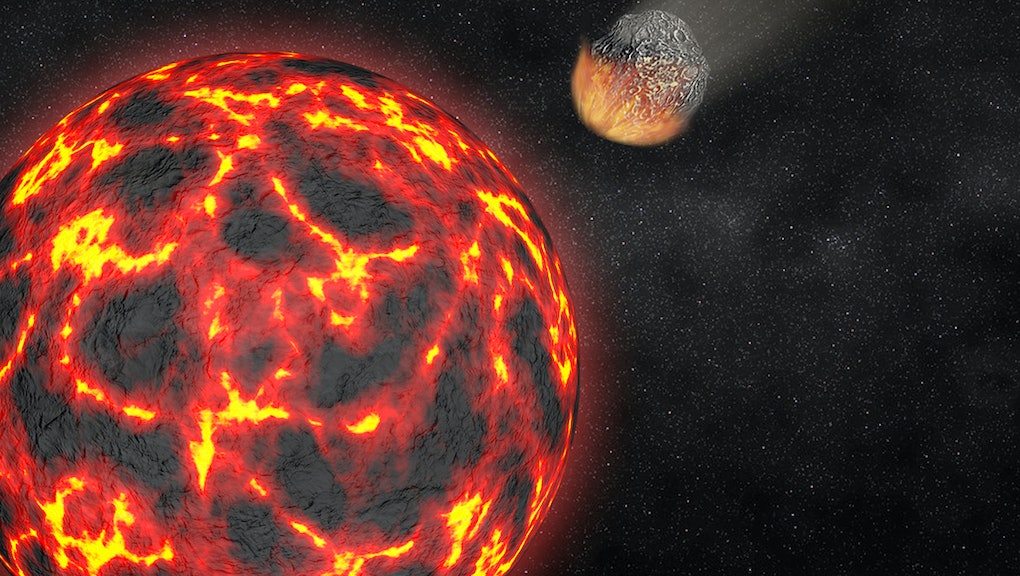 All signs point to a violent birth for the moon

The moon is our closest neighbor, but that doesn’t mean we’ve cracked all its secrets. The biggest mystery is how it formed. A study published today in the journal Science Advances adds more evidence that it was a pretty dramatic process.

The team measured an element called gallium found in samples of moon rock brought to Earth. Gallium exists here on Earth too — the metal is famous for melting in a cup of warm water. And like many elements, it comes in a bunch of different flavors, called isotopes, depending on how many neutrons the atom carries. That doesn’t change an atom’s charge, just how much it weighs.

Other studies have analyzed isotopes of elements like potassium and zinc in lunar samples. By looking at the ratio of lighter to heavier isotopes of those elements and comparing it to the same ratio here on Earth, scientists have gotten a sense for how much of the lighter isotopes the moon has lost.

The moon didn’t just spontaneously lose its lighter isotopes — it would have taken one or more pretty dramatic events, which also stripped it of much of its supplies of lighter molecules, like carbon dioxide and water. That’s why current theories about the moon’s formation are eventful, featuring a giant impact and the evaporation of an ocean of magma covering the whole moon. But scientists aren’t sure just how powerful an impact — and isotopic signatures could help solve that mystery.

Just like gallium is rare here on Earth, it’s also rare on the moon, and in the lunar samples we’ve brought back. And analyzing the isotopes requires destroying a small sample of the rock, according to an email from study co-author Frédéric Moynier, a geochemist at the Institut de Physique du Globe de Paris. That means this is the first study to look at gallium isotopes.

The gallium isotope analysis matches up pretty well with the other types of isotopes scientists have looked at in lunar samples, according to Kun Wang, a planetary scientist at Washington University in St. Louis, who wasn’t involved in this study but has done lunar potassium isotope measurements. Gallium, zinc and potassium are all what are called moderately volatile elements, so during the moon’s tumultuous birth, it lost some, but not all, of the lighter isotopes of each.

That’s perfect for scientists — if all the light isotopes had been lost, there would be nothing to study, and if all had been retained, they wouldn’t be able to tell us anything about the moon’s past. But while all three elements are in about the same range, they’re each a little different. “That’s why people measure different isotopes, because they respond differently,” Wang said.

Potassium seems to be the least volatile of the three, so that isotope signature could help scientists figure out the minimum scale of the original giant impact. “You have to come up with a mechanism, how did the moon form to fractionate the isotope from the beginning,” Wang said. Then gallium and zinc, which seems to lose lighter elements a little more easily and vary more across the moon, can offer a more detailed look at what might have happened afterward, like during the magma ocean period.

The problem right now is that scientists aren’t sure just how much energy it takes to get different isotope ratios in different elements. Without that information, it’s tricky to take the signatures we see on the moon and work backward to see what happened as it formed. But that’s a solvable problem. “We’ll never have enough energy to recreate a giant impact of the moon here on Earth, but we can do some smart designs to extrapolate it,” Wang said.

Wang pointed to a recent study, which Moynier also took part in, looking at glass found at the Trinity test site in New Mexico, where the first nuclear weapon was detonated in 1945. There, we know how much energy was produced, so measuring the isotopes that resulted can help scientists work backward from the moon’s results.

Moynier also wants to keep developing that line of research, and wrote in an email that he and colleagues are currently building a new device that will hopefully let scientists more accurately establish what conditions lead to which isotope signatures.