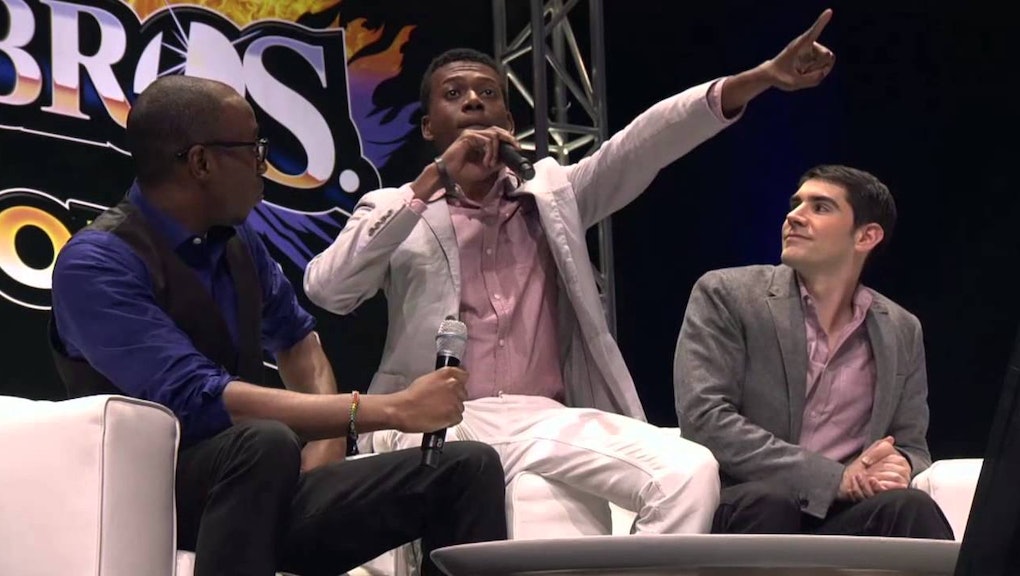 The history of competitive ‘Super Smash Bros.,’ as told by D1, the biggest announcer in the game

Super Smash Bros., Nintendo’s iconic fighting game that first launched in 1999, has gone from unsanctioned matches in card shops and dorm rooms to fights broadcast on live television for five-figure prizes. In the past year alone, the game’s rise has been meteoric. Smash tournaments have always been popular in the gaming world, but only in 2017 have they become big enough to be featured on Disney XD and ESPNU.

So how did we get here? We asked D’Ron “D1” Maingrette, a former player who’s now one of the biggest announcers in the pro Smash scene, to take us through the history of the series’ competitive play.

D1 is a legend in the Smash world; he’s been active since the scene’s humble beginnings and has seen nearly two decades of gaming history unfold. He now works as a Smash Bros. community program manager for Twitch.

Even though he’s headed to Mexico this August to call matches for Smash Factor 6, D1 most high-profile hosting gig yet happened on July 16: EVO 2017, a tournament that brought together the biggest legends of the game, broadcast on Disney’s action-oriented channel, Disney XD, and college sports channel ESPN U. The battles were heated, but it was the end of the tournament that affected D1 most. “To have us on TV and to trust me with that task, it was indescribable,” he said of the Disney broadcast. “That was the biggest moment of my entire life.” The magnitude of the moment left him in tears.

EVO 2017 felt like the culmination of a decade of work for D1. “My goal’s always been to get more eyes on the community,” he said.

But his objective was once much humbler. First, he had to win a single tournament match.

While the Nintendo 64 classic Super Smash Bros. kicked off the series, it was with 2001 GameCube title Super Smash Bros. Melee that the game started to really get competitive. As fans played the game, top-tier fighters started to make a name for themselves while others unearthed pro techniques like wavedashing. The scene had become a force.

D1’s love of competitive play, however, started in the summer of 2002 with a different game: Soul Calibur 2. “They announced Link was going to be in the GameCube version,” he said, and “I was a big Zelda fan.”

The Brooklyn-born, New York native played Soul Calibur 2 nonstop, lurked online around the competitive scene and even attended a tournament for the game, where he played two matches, losing both. He went home to research how to play the game better and ended up stumbling upon competitive Smash Bros. matches. “That shocked me,” he said. “I’d played Smash 64 back in 1999 and I never thought there was a competitive scene.”

Back then, competitive Melee players were a small but intense group, and in the early 2000s, many of today’s legends were just getting started. D1 quickly became enthralled watching online footage of Smash legends like Ken and Isai duking it out with aggressive combos. In real life, D1 and other fans of the game would fill rooms to the brim, sometimes crowding beyond fire code limits, he said, all in the name of Smash.

D1 was hooked. He eventually started competing for real — but just like with Soul Calibur, his first Smash matches were a lesson in humility. “I didn’t lose motivation, though,” he said. “For some reason I just kept at it.”

In 2006, D1 traveled to a Super Smash Bros. Melee tournament for the first time, and a year later he was a top-ranked player on his home turf in New York. In 2008, Super Smash Bros. Brawl, the third game in the series, was released.

“There was a scene around Brawl too, but in 2009 we lost the venue we used to hold tournaments in New York City,” he said. “I took it upon myself to start hosting events. I had a friend, Prog [Wynton Smith], bring a laptop to these events, and we’d hop on the microphone. We thought calling the matches as they go would be really something — and somehow it really blew up.”

Those basement brawls packed full of people were history in the making. If it wasn’t the first time a Smash match had color commentary, it was among the earliest.

D1’s first big event was the fighting game tournament Apex in 2010, in New Jersey, which gave him the confidence to do more announcing gigs. After a few more years of steady work, he got another big break: an invitation from Nintendo to provide live commentary at a rare Smash Bros. tournament at E3 2014.

It was here, at the biggest gaming event of the year, where he and his fellow commentators got to call the world’s first tournament for Nintendo’s newest Smash Bros. game: Super Smash Bros. for Wii U, known as Smash 4.

Yearly fighting game tournaments like Apex, CEO and EVO kept fan interest alive, along with message boards like Smashboards and the Smash Bros. section of Reddit, where fans could chat about the game. Between tournaments and forums where fans could geek out about highlights and strategy, a storm was brewing.

Which leads us to 2017, a time in which Major League Gaming is huge and actual sports organizations establish video game leagues for their virtual counterparts. It wasn’t intentional on Nintendo’s part, but its Mario-themed brawler had become one of the most popular series in the fighting game tournament world.

Now, D1 is a veteran — a beloved voice of the game at a time when its competitive play is drawing a massive audience. It’s easy to see why his style of announcing resonates with so many fans; D1 is known for the level of hype he can bring to a match, though nowadays he keeps a close eye on the amount of excitement he doles out.

“I focus on not being overly hype at the wrong times,” D1 said. “You don’t want to cheapen moments. If people notice you’re hype about every little thing, they don’t know if it’s genuine or not. Even if the entire time you do find everything exciting, you have to understand when to hold back.”

D1 sees himself as the storyteller for each match, offering important background info like the history between two opposing players, the characters they select and how everything interacts on-screen. Painting this picture adds to the buildup. “You don’t want to immediately get hit with that big moment,” he said. “Once the match progresses, you start noting key interactions that may result in a turning point. When the player is about to end the match is when you want to finally bring it home for viewers. Think of it like a crescendo.”

The scene still has the potential to grow much larger — in many ways, it feels like we’ve just closed the first chapter of the great history of competitive Smash.

D1 will help usher the game into the future. In his current position as Smash Bros. community manager for Twitch, D1’s job (with help from co-worker Crimson Blur) is to help grow the scene that’s given him so much, which he does by fielding questions from event organizers whose Smash tournaments are just starting out or by facilitating relationships with businesses that are interested in sponsoring players — and he hosts the occasional stream on his Twitch channel, of course.

“That’s why a lot of times I get really hype,” he said. “Because I know where we came from and I still can’t believe, to this day, we have the audience that we have. It’s only going to get bigger.”

Check out the latest from Mic, like this essay about the sinister, subtle evils lurking in rural America that Far Cry 5 shouldn’t ignore. Also, be sure to read our review ofTekken 7, an article about D.Va’s influence on one Overwatch player’s ideas about femininity and an analysis of gaming’s racist habit of darkening villains’ skin tones.