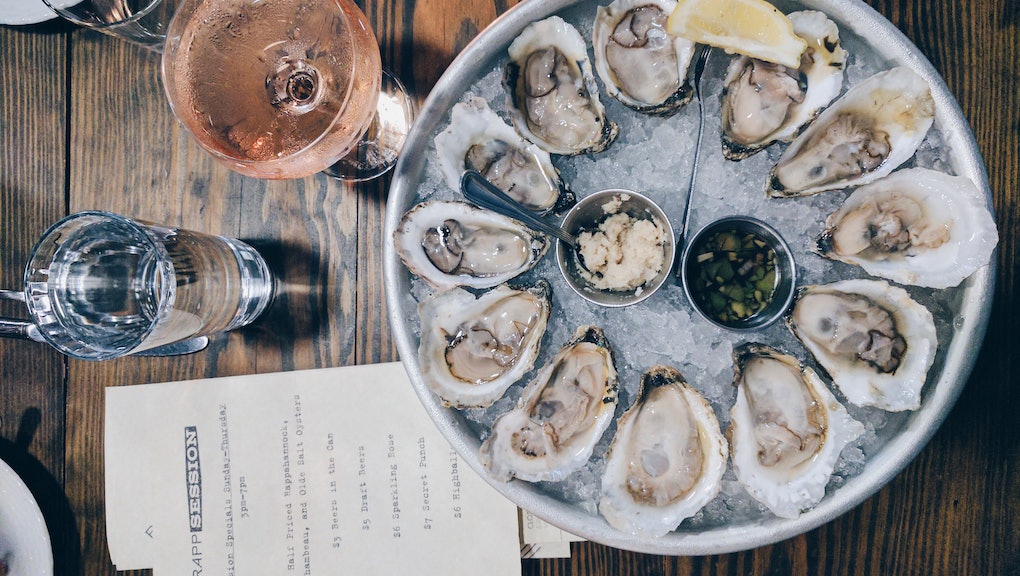 If you love dollar oyster specials, here are 7 things to know before you slurp

For some oyster lovers, dollar oyster specials are sacred. With just a few bucks, you can fill your belly with salty and squishy bites of perfection without spending a lot. When oysters are discounted from their regular price of $2.50 (or up to $5) to just a buck, you can eat around three times the oysters for the same price. Plus you’ll be able to add a glass (or two) of vino to wash it all down.

If oysters make you shucking excited — and we don’t mean the “oysters-are-aphrodisiacs” kind of excited, we mean the “need-to-leave-work-ASAP-to-make-happy-hour” kind of excited, there are a few things you should know before you sprint to your nearest oyster happy hour.

Not all oyster lovers eat up the affordable deals because, well, you often get what you pay for.

“The oysters available to you during oyster happy hour honestly aren’t that good,” Rachel, a restaurant general manager who requested anonymity so she could speak freely, said in a phone interview. “They’re always Blue Points from Long Island,” Rachel, who calls them “gross,” said. Rachel attends happy hours in New York City when friends want to, but she doesn’t frequent them herself.

Generally, restaurants won’t generate much profit from oyster specials and it’s a tactic to get customers in the door. “I don’t know that anybody is making money on those sorts of things,” Rachel said, noting that during regular service, most establishments charge four times what they bought the oysters for.

“A restaurant might offer an inexpensive oyster from either Canada or down south for a dollar during happy hour, and keep the higher priced local or west coast varieties for regular service,” Keenan Boyle, an oyster expert from Long Island, said in an email interview.

But the oysters will definitely be fresh and safe to eat

It’s true that certain restaurant specials are created in order to sell product that’s nearing the end of its shelf life, but there’s no need to stress about low-priced oysters being dozens of days old.

“As restaurants, we’re in the business of not making people sick,” Rachel said. “We’re really super careful about these things. It would be a public health disaster.” She noted that at the New York City restaurant where she’s a general manager, the team gets shipments of oysters several times a week and the oysters are served within a few days of arriving.

“Every oyster should smell fresh like the ocean with no fishiness to it.” — Keenan Boyle, Long Island oyster expert

The person shucking your oysters will know if they aren’t fresh. Tapping an unshucked oyster with a knife reveals its freshness. ”If you hear a hollow sound, it means the oyster is dry and probably no good,” Boyle, the oyster expert, said. He explained that oyster shuckers occasionally come across a “stinker” that smells dubious. “Every oyster should smell fresh like the ocean with no fishiness to it,” Boyle said.

Oysters taste better in the winter

Summer weather might feel more appropriate for chilling at a bar with a dozen oysters, but “generally, oysters are better in colder months,” Erick Loos, chef at Lüke, a New Orleans seafood restaurant, said in an email. “The outside temperature is easier on them during harvest and transportation and the meat is firmer.”

There’s an old adage that you should only eat oysters and other shellfish during months that have an “R,” but it’s misleading and outdated. According to Boyle, the advice was from decades ago when refrigeration methods weren’t able to keep oysters cool and safe to eat. But advances in refrigeration mean you can safely enjoy them year round, he noted.

“There’s nothing wrong with [eating oysters in summer], they’re just not at their most flavorful,” Rachel said, noting that warmer weather in summer months results in oysters that are “kind of thin” and less plump than they are during winter months.

Order East Coast or West Coast oysters based on your beverage

East Coast and West Coast oysters have fervent fans for different reasons. Both coasts have merits so your oyster order should factor into your drink order — or vice versa.

What to know: “You notice the texture in the East Coast oysters,” Boyle, said. “It’s a little bit more chewy compared to a West Coast [oyster], which almost melts in your mouth. A silky West Coast would pair better with a champagne,” he said, explaining that salty, briny East Coast oysters pair well with beer and are traditionally paired with stouts.

Hot sauce, soy sauce, lemon juice or vinegar and shallots — these are only a few of the garnishes you can spoon onto your half shells. But how to choose the right one?

“I always say, do the first one naked and then you know what you’re dealing with,” Boyle said. “You get a sense of the flavor essence of the oyster.” After that, he recommended experimenting with garnishes. “Then I [usually] put a little mignonette — which is red wine or white wine vinegar, cracked peppercorn and shallots — on the second one. And then I add some cocktail sauce to the third one, but that’s my personal preference.”

If you want the freshest oysters, go somewhere with a focus on seafood

Ben Crispin, the general manager of New York City restaurant and oyster emporium Maison Premiere, recommended going to a place with a robust oyster program to get the best possible oysters.

“The best oyster bars are the busiest oyster bars. They’re turning through their product and it’s always fresh,” Crispin said in a phone interview. Maison Premiere has 31 oysters on the menu, sells roughly 10,000 to 15,000 oysters in a week and gets shipments of oysters “almost every day,” he said.

Crispin noted most restaurants serve oysters that have been out of the water anywhere from three to five days. “Oysters are heartier than people think,” he said.

To avoid crowds, seek out the late-night specials

Whether your 9 to 5 job runs late or you’re always working nights, there are myriad reasons you might miss standard happy hour. Luckily, there are restaurants with oyster specials after the standard 4 to 7 p.m.

“We have a large industry crowd after 11 p.m. and they appreciate a low cost, high quality and healthy option before heading home,” Patrick Lee, co-owner of the Grafton Group (the hospitality group that runs both restaurants), said in an email interview.

There are other late night industry happy hours, if you know where to look. All Set Restaurant and Bar in Silver Spring, Maryland, offers oyster specials from 10 to 11 p.m. from Monday through Saturday. Also in the D.C. area, the restaurant Eat the Rich has dollar oysters from 11 p.m. until close every day.