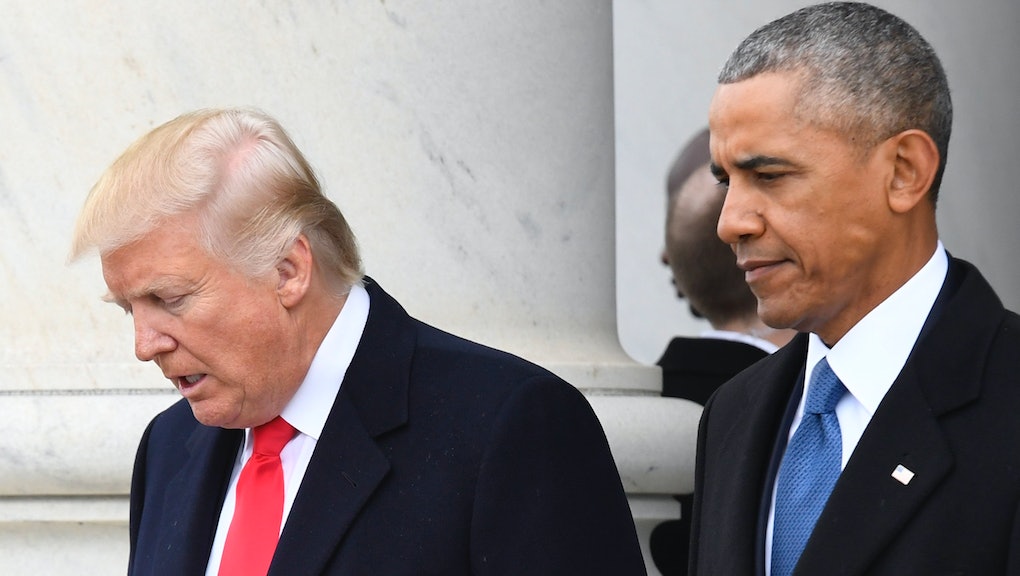 Trump may not realize it, but he actually agrees with Obama on the 60-vote filibuster rule

President Donald Trump took to Twitter Saturday to call for the elimination of the 60-vote Senate filibuster rule — the same one that caused former President Barack Obama to drop the public option as he worked on the Affordable Care Act.

The Senate filibuster allows a lawmaker to block legislation until 60 members or more motion to cloture, or end the debate on the bill. Ideally, doing so forces further deliberation on a piece of legislation, but it has been a source of frustration for both parties, who have accused one another at various points of using it to obstruct their agenda.

Threats of a filibuster from conservative Democrats and then-Sen. Joseph Lieberman, an independent, led Obama to pull the public option from the ACA in 2009.

In 2015, Obama suggested he would be in favor of eliminating the 60-vote filibuster, describing it as an agent of gridlock.

“Probably the one thing that we could change without a constitutional amendment that would make a difference here would be the elimination of the routine use of the filibuster in the Senate,” Obama told Vox. “In an era in which the parties are more polarized, it almost ensures greater gridlock and less clarity in terms of the positions of the parties.”

“There’s nothing in the Constitution that requires it,” Obama continued. “The filibuster in this modern age probably just torques it too far in the direction of a majority party not being able to govern effectively and move forward its platform.”

Trump, fresh off another loss on health care, echoed Obama’s critiques of the rule on Saturday, stating that the 60-vote cloture rule will doom his agenda.

This isn’t the first time Trump has called for the rule to be eliminated — he also called for it to be axed in May amid spending negotiations in tweets that also suggested the United States needed a “good ‘shutdown’” to fix the mess in government.

Both Senate Majority Leader Mitch McConnell and Minority Leader Chuck Schumer said the Senate would not change its rules, with the former saying that it would “fundamentally change the way the Senate has worked for a very long time.”

“We’re not going to do that,” McConnell said at the time.

In his tweets Saturday, Trump said it is an idea that Democrats — who are “laughing” at Republicans — would similarly back his proposed rule change if they “ever got the chance.”