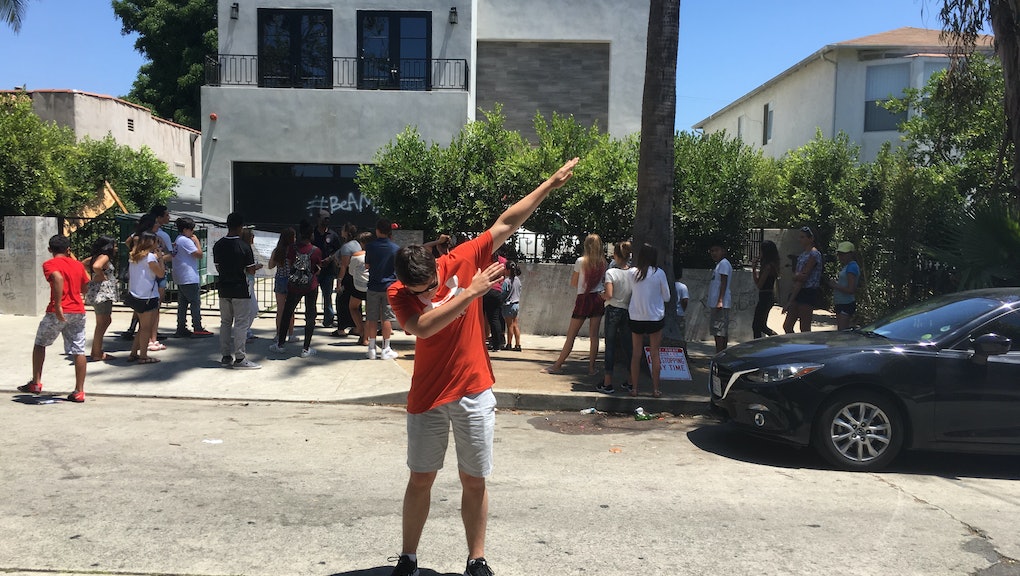 Los Angeles — Every morning, beginning around 11 a.m., crowds of tweens and teenagers converge on the sleepy Los Angeles neighborhood of Beverly Grove and gather outside Jake Paul’s house.

The mid-sized stucco duplex, also known as the “Team 10 house,” is where Paul, a 20-year-old former Disney star and “influencer” with nearly 25 million followers across social media, lives. He shares the home with an ever-rotating cast of former Vine stars, current YouTubers, young influencers and anyone else who Paul deems worthy of joining his “squad.”

Paul initially found fame on Vine, Twitter’s ill-fated six-second video app. But in recent years he has become known for outrageous YouTube videos and stunts that many people, including his neighbors, deem irresponsible and dangerous.

One recent stunt involved setting furniture on fire in his rental home’s backyard, which neighbors said resulted in a giant blaze with flames reaching the top of the house. Another consisted of building a giant makeshift water slide out of rickety wood and tarps. He posts videos to his YouTube channel daily and has become a master of making things go viral. In 2016 Disney recruited him to star in its series Bizaardvark, a fictional show about a group of famous vloggers. Off-screen, he’s become known for his brash personality.

The pilgrimage to Paul’s real-life house has become a rite of passage for his young fans. Many teens travel from out of state to pay their respects. On Saturday, kids from New Jersey, New York, Nevada, Arizona, Oregon, Florida and all over California had made the trip.

For many, the chance to spend these few hours in the scorching LA sun was a birthday present, a reward for getting good grades or compensation helping out with chores.

Once deposited by their parents, the teens cluster in groups, compare knowledge of Paul’s personal life, chant his name, snap hundreds of selfies a minute and dare each other to inch closer and closer to the property line until inevitably being halted by the security guard, a friendly and patient former teacher.

The minute you step onto Paul’s block, you can feel a wave of nervous energy radiating from these tweens. As I, a lone millennial, approached the house, kids outside swerved their necks and whispered to each other, trying to suss out if I was someone worth knowing.

Part of being a teen is spending hours just waiting around, hoping something interesting will happen, and these days, hanging around outside the house of a controversial internet star is more eventful than going to the mall.

In fact, some teens at the house said they weren’t even huge Jake Paul fans — they just had nothing better to do on a Saturday. Plus, if something interesting did happen, they could at least capture it on Snapchat.

“We just thought it would be funny, and we were bored today,” said Veronica and Jaelyn, two Santa Monica teens standing by Paul’s entryway gate. “We were like, ‘What should we do today? We’re so bored.’ Then we were like, ‘Wait, let’s go to the Team 10 house.’”

Jack, another teen who happened to be in Los Angeles for college visits, said he was only really visiting the house ironically. “I just thought it would be funny,” he said, after dabbing in the street.

When people see photos of the kids outside Paul’s house, they often ask, “Where are their parents?” For the most part, mom and dad are seated on the curb across the street. “Parents’ row” is kept cool by big leafy green trees; moms seem to enjoy a quiet place to rest while keeping an eye on their youngsters across the way.

Some parents are busy babysitting younger children. Others commiserate with each other, wondering how and why their children have become so enamored with someone like Jake Paul.

“I have very mixed feelings about this,” one mother said as she sat on the curb across from Paul’s house. “I don’t love it and I feel bad for the neighbors. I try to support my kids in their interests and it seemed harmless when they asked to come. ... It’s just a lot of kids and parents like me who are trying to follow the interests of their kids. But, like I said, I do feel reluctant.”

Becky, a mom of 11- and 14-year-old girls from Arizona, said, “My kids drive me nuts; they’re so obsessed with this guy. I have no idea why they’re obsessed. I don’t see anything fabulous about him. But I know when I was a kid it was all New Kids on the Block, so this is just their version.”

While some neighbors are sympathetic to parents’ desires to please their kids, others still felt they were destroying the once-quiet neighborhood.

These aren’t just harmless teens standing around hoping for an autograph, one local resident argued. They chant Paul’s name, post graffiti on the walls by his house, spray-paint trees with his name, hold up signs, stop traffic and scream bloody murder if they sense Paul or one of his fellow Team 10 members might grace them with an appearance.

The teens spray-paint trees with Jake Paul’s name, hold up signs, stop traffic and scream bloody murder if they sense he might make an appearance.

After a KTLA news segment on the tension between Paul and his neighbors went viral, many in the quiet Los Angeles block hoped things would calm down. Paul received widespread media backlash from the event, and neighbors arranged a public meeting with the police to voice their concerns.

For a moment, it seemed Paul might face real consequences for his actions. Disney parted ways with the star and, as a false rumor about his arrest spread on Twitter, some of his detractors wondered if justice had been served.

Unfortunately, as is often the case with controversial celebrities, backlash and public outrage only added fuel to Paul’s fire. Ultimately, the events seemed to inspire more loyalty from his teen audience.

“I understand how it could get annoying for neighbors because they’re famous,” said Brooke, a 12-year-old fan. “But Jake is just trying to do his job.”

“It’s not Jake’s fault that all his fans are here,” said Brooklyn, a 14-year-old from California, despite the fact that Paul regularly publicizes his address. “The neighbors should understand he’s just a kid. Give him another chance. He’s not an adult really. He just moved here from Ohio.” Paul is 20 years old.

As we spoke to one group of teens, a neighbor angrily pulled out of his driveway directly across the street from Paul’s house and glared at the crowd. When I called after him for comment, he rolled down the window of his BMW and shouted, “I just want them all to leave,” before speeding off.

The hottest ticket in town

But these teens won’t go, and it doesn’t matter if Paul is currently inside the house or not. In fact, the main reason they come is just to be able to say that they were there.

When asked what they hope to get out of their afternoon or what would make it all worth it, several teens said simply posting Instagrams and Snapchats from outside Paul’s house was enough to earn them a flood of likes and comments on social media.

“When I found out I was going I told all my friends at home, and they were all like, ‘What! Oh my God, you’re going to the Team 10 house!? Ah!’” said Jillian, an 11-year-old from Reno, Nevada, whose mother took her and her 10-year-old cousin to visit the house. “Everyone was freaking out. They were all so super-excited about it.”

Brooke, an energetic 12-year-old hovering outside Paul’s entryway, said making the trip to his house was her big birthday present this year. As she stood in the hot sun craning her neck to get a better look over the gate, she said there was no place she’d rather ring in the next year of her life.

“I’ve wanted this for a while,” she said. “I’ve been watching Jake for a long time. I actually really love the whole Team 10 house, and I think it would just be so amazing if I could just meet them.”

Ryan, a 13-year-old from San Francisco, and his 12-year-old best friend, Niv, also received a trip to Paul’s house as a joint birthday present. The two arrived just after noon on Saturday along with Ryan’s 10-year-old brother, also a huge Jake Paul fan, and their mom, Yasmin.

It was their mom who drove them down from San Francisco for the occasion. “Ryan and Niv are both turning 13,” she said. “They’re best friends and they have been following this guy. This is what they wanted for their 13th birthday, to have this experience, so we made it happen.”

“Personally I have no idea who this guy is,” she said. “I don’t know what he looks like; I’ve never seen his shows. I had no idea about any of this stuff. But it’s really amazing,” she said of the spectacle. “I never had anything like this when I was growing up.”

Niv, who admitted that he was more of a broad Team 10 fan than an outright Jake Pauler, carried his own hand-held vlogging camera to document the once-in-a-lifetime experience. “I also do YouTube,” he said, “so I came here to get some content.”

As neighbors band together and debate whether or not to file a class-action public nuisance lawsuit against Paul, we asked many of his loyal fans what he would have to do for them to abandon him.

One girl, wearing a Team 10 branded sweatshirt, said she was a “Jake Pauler for life” and didn’t think she’d ever stop following the star’s every move, no matter what he did.

Bridget, a 10-year-old from New Jersey, said the same. “No one out there is as entertaining as Jake,” she said. “He does the funniest stuff — like, he burns furniture in the pool.” She said the only way she’d stop following him is if he quit YouTube.

Brooklyn, 14, agreed. She said if he quit YouTube, maybe she’d get over him, but until then, she’s “Team Jake Paul, always.”

“No one out there is as entertaining as Jake,” a 10-year-old fan said. “He does the funniest stuff — like, he burns furniture in the pool.”

Other kids said they might like him less if he became less authentic. The fact that he bucks authority and lives a dream life in LA is appealing, but several kids said if it appears that it’s going to his head too much, he might lose fans. For now, they said they like following him because it feels like they’re living vicariously through his stunts.

“Nothing he could do would make me not like him anymore,” said Kiran, a 10-year-old fan.

“I don’t know if there’s anything he could do,” added Parker, a 14-year-old girl. “Maybe kill someone. If he vlogged it, it would be entertaining, though.”

*Last names of minors have been withheld.