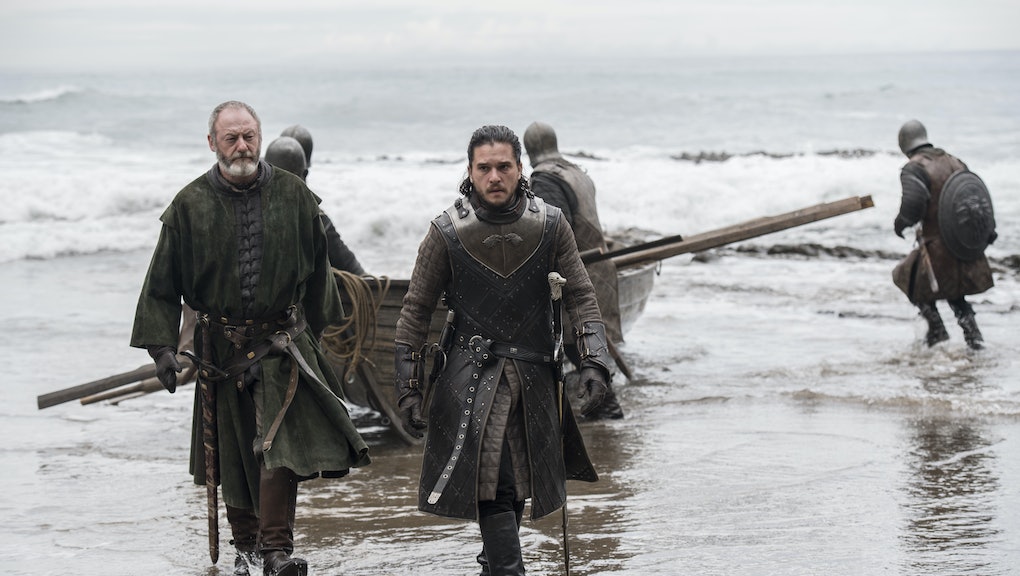 ‘Game of Thrones’ season 7, episode 4 preview: A breakdown of everything HBO teased for next week

The third episode of Game of Thrones’ seventh season, “The Queen’s Justice,” came through on a plot point fans have been waiting for since season one: the meeting between Jon Snow and Daenerys Targaryen. It was a tense moment to say the least, with Jon refusing to bend the knee and Dany vaguely threatening to imprison her apparent nephew (though they still have no idea they’re related). The episode also featured tactical advances by Dany’s army on Casterly Rock and Cersei’s army on Highgarden, where Jaime kindly offers Lady Olenna some poison in lieu of being flayed alive as Cersei had wanted. And, judging from the teaser for this season’s fourth episode, next week promises even more excitement.

Here’s everything we know about the upcoming episode of Game of Thrones, “The Spoils of War.”

The teaser opens with Cersei stalking into her map room, accompanied by that guy from the Iron Bank, saying that her “only venture at this moment is reestablishing control over this continent and every person on it.” She’s not exactly one for subtlety, but her assertive approach has been proven to get results — she is the ruler of the Seven Kingdoms, after all.

It looks as though Cersei is leaning on the Iron Bank for further monetary support. More money equals more soldiers, and that, of course, means a higher chance of victory in the coming war for the Iron Throne. The Iron Bank appeared to be doubtful of Cersei’s position in “The Queen’s Justice,” but now that she’s taken several of Daenerys’ allies off the board, she’s seeming like a safer bet for the Iron Bank. (And, really, that’s all they’re concerned with — they want the best return on their investments, so they’re not going to lend more money to someone with a slim chance of survival.)

Cersei must end up convincing the Iron Bank that she’s good for the money — later on in the preview, the Bank’s representative tells her, “You can count on the Iron Bank, as soon as the gold arrives.” We then see Jaimie opening the doors to what looks like a huge cache of the precious metal. Nicely done, Cersei.

Things are not looking good for the Mother of Dragons. Not only has Euron destroyed her naval fleet, but he’s also captured Yara and Ellaria and brought them to Cersei as proof of his goodwill. Grey Worm’s assault on Casterly Rock proves fruitless — they take the Lannisters’ fortress but lose the remainder of their ships to Euron, again. (That guy’s really easy to hate.) Meanwhile, Jaime and the Lannister army march to Highgarden to take out Lady Olenna and stop the Tyrell army in their tracks. So, yeah — not good.

In the trailer for season seven’s fourth episode, Dany turns to Jon with a worried a look.

She appears fed up with listening to Tyrion and the rest of her council. Now, it looks like she’s ready to switch up her tactics and, like Lady Olenna suggested to her in the season premiere, to be the dragon that she is.

“Enough with the clever plans,” Dany declares with her classic perma-pensive look.

Does this mean we’ll finally get to see Dany rain dragonfire on her enemies while tearing through the skies on Drogon’s back? Fingers crossed.

Okay, so Theon lost some major points after abandoning his sister Yara and leaving her to be kidnapped by their psychotic uncle. But he might make up for it before the season draws to a close. In the new preview, Theon leads a small group of men with a boat — we might be giving him too much credit, but maybe he’s leading a rescue mission for Yara?

It’s difficult to say with 100% certainty, but that looks a lot like the Mother of Dragons on the back of Drogon. We’ve already established she’s done with “clever plans,” which implies she’s going to take a more direct, forceful approach to claiming the Iron Throne. Is this a shot of Dany getting ready to devastate her enemies? If so, she needs to fly fast and true because Cersei probably has a few ginormous, dragon-killing crossbows aimed right at her.

Watch the preview for Thrones’ next episode, “The Spoils of War,” below.

Game of Thrones airs Sundays on HBO at 9 p.m. Eastern.