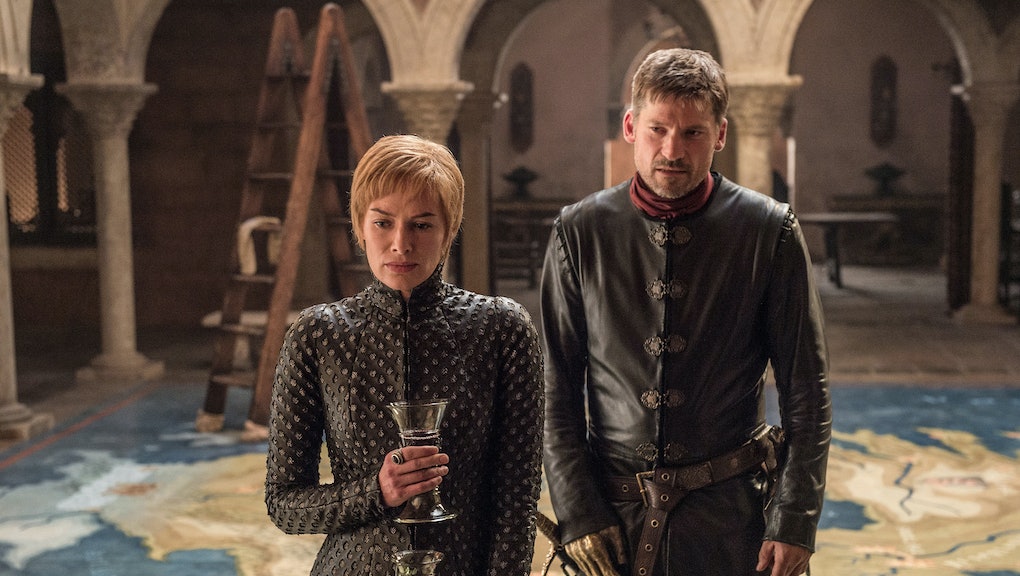 ‘Game of Thrones’ Theories: How long until Jaime Lannister becomes a Queenslayer?

Characters on Game of Thrones don’t often die gracefully, but Olenna Tyrell (played by Dame Diana Rigg, excellent as always) went out on her own terms in spectacular fashion during Sunday night’s episode. After the Tyrell soldiers are wiped out by Jaime Lannister’s army, Olenna shares a final scene with Jaime, who offers her a dignified defeat: painless poison mixed with some wine. She takes the glass and chugs it down like water, and her mood changes from despondent to stinging; quite fitting for the so-called “Queen of Thorns.”

“I’d hate to die like your son,” she tells Jaime, confessing that she was the one behind Joffrey’s grisly murder, a fact the audience has been privy to since season four. “Tell Cersei,” she adds. “I want her to know it was me.” She might as well have dropped the wine glass on the floor, which we’ll call the Westerosi equivalent of a mic drop. Even on death’s door, Olenna is throwing shade with the best of them — we’ll miss her terribly.

But Jaime lives on, and with each episode in season seven, he appears more and more likely to fall apart under the weight of Cersei Lannister’s tyranny. It seems inevitable that Jaime and Cersei will destroy one another — Olenna says it herself, “She’ll be the end of you” — though I fall in the camp of people who believe Jaime will end up killing his incestuous lover. That’s one of several theories we’re keeping track of on Thrones this season, and the scene between Jaime and Olenna offers some ominous foreshadowing for Jaime and Cersei’s future, and it also vindicates Tyrion Lannister in the eyes of his brother.

No one would accuse Olenna of ever being afraid to speak her mind, but knowing that her moments with Jaime will likely be her last in this life allows her to be as forthright and scathing as possible. That really means putting Cersei on blast, and confronting Jaime with the uncomfortable truth about his beleaguered lover. Olenna pulls no punches in telling him that Cersei’s been a monstrous ruler — for proof of her cruelty, one just has to look at the way she dispatched the High Sparrow, Margaery Tyrell and countless others when she blew up the Sept of Baelor with wildfire.

That was a move akin to something the “Mad King,” Aerys Targaryen, would try (he amassed all that wildfire in the first place). And remember: Jaime sacrificed his reputation as a knight to stop Aerys, stabbing him in the back to save the realm from him and earning the unshakable “Kingslayer” moniker in the process. Right now, Cersei is in full “Mad Queen” mode, and Jaime’s clearly shaken by this comparison when Olenna brings it up. It’s not because he’s insulted she’d make this insinuation about Cersei: It’s because what Olenna says is undeniably true. “Your sister has done things I was incapable of imagining,” she says. “That was my prized mistake, a failure of imagination.”

Jaime doesn’t deny this, either. Even he seems, in retrospect, surprised and troubled that Cersei would be willing to give up Casterly Rock, the Lannister’s ancestral home, as collateral in the war against Daenerys Targaryen. And that wouldn’t even rank among the 20 worst things she’s done on the series.

Olenna’s confession regarding Joffrey’s murder also gives Jaime insight into Tyrion’s plight. Tyrion was the perfect scapegoat for Olenna — Cersei wasted not a single moment to point the finger at Tyrion, blaming him for her son’s death; Tywin Lannister was just as happy to go along with it and sentence his own son to death. Now Jaime knows without question that Tyrion had nothing to do with Joffrey’s death — even if he suspected as much already.

Does it mean Jaime will forgive Tyrion some for killing their father in retaliation? Perhaps unlikely, but in the macro view of Thrones, Tyrion killing Tywin is a mere blip compared to the countless atrocities committed by Cersei. Eventually, Jaime might come to terms with how far gone his sister is and perhaps make another momentous sacrifice and kill his lover for the good of the realm.

“She’s a disease,” Olenna says to him about Cersei. “I regret my role in spreading it. You will too.”

• We pretty much know that Jon Snow is a half-Targaryen, and it seems likely that there will be three dragon riders in Thrones, per George R.R. Martin’s own vague blessing. Well, Jon finally met the dragons on Sunday, and we’re betting that he’ll ride one alongside Daenerys (and possibly Tyrion). But as with any new pet, it’s going to take Jon and his dragon some time to get accustomed to each other, if he is indeed going to command one of them — and it might be a tad more difficult than training a dog, since dragons, you know, breathe fire.

• Is this whole show really about Littlefinger vs. Varys? In Littlefinger’s eyes, it’s really Littlefinger vs. The People of Westeros. At one point in Sunday’s episode, he offers some vague, cryptic advice to Sansa Stark, telling her that she shouldn’t be concerned with the White Walkers or Cersei. Why? Because everyone is an enemy — and a friend. Wait, what? Honestly, he sounds stoned.

• So, Bran Stark is back in Winterfell. Good for him! Probably not good for the Night’s Watch, though, since Bran passing through the Wall with the Night King’s mark on his arm could mean that the White Walkers will be able to destroy the Wall. Not great, Bran!