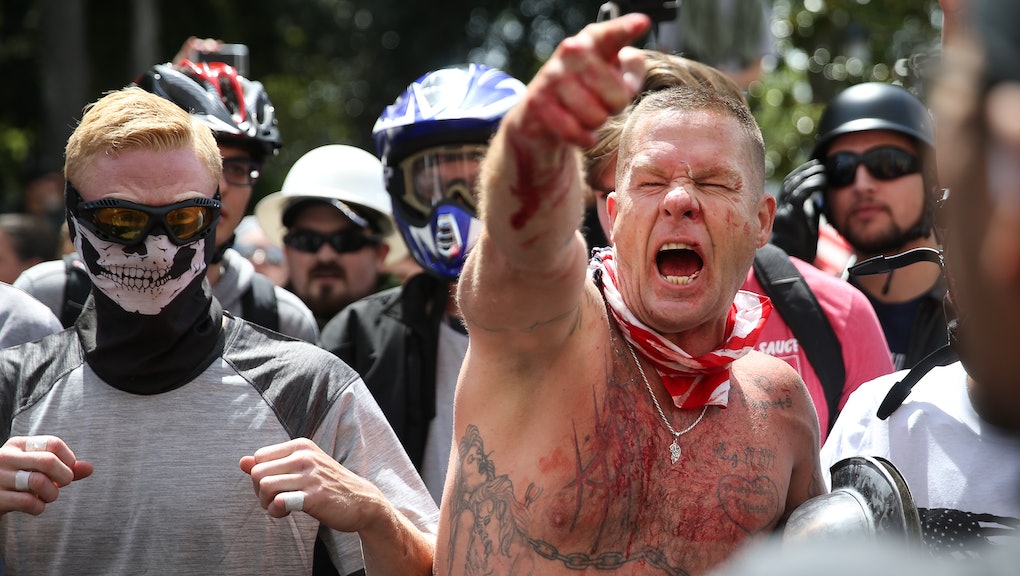 Alt-right mascot regrets everything, says he made a “horrible mistake”

(Editor’s note: In December, five months after the publication of this story, Turano was filmed shouting at a Palestinian family, allegedly referring to the 5-year-old as a terrorist. Mic’s original story appears below.)

John Turano was a smack-talking, antifa-smashing, garbage can-tossing, alt-right warrior hero. He arrived at far-right rallies as a self-identified patriot, shirtless in a helmet, tattoos and American flags. They called him “Based Spartan.”

And then, at a later rally in Portland, Oregon, a Jewish counter-protester came up to him and asked a question that, as he told the Vanguard, made him feel awful: “Does my life matter?”

Since then, Turano has distanced himself from his public appearances with the so-called “alt-right,” telling the Vanguard that he made a “horrible mistake.” He remains an ardent Trump supporter, showing up at counter-protests and declaring himself a proud patriot. But now he’s part of a growing faction of right-wing activists who regret their recent involvement with the alt-right.

The recent bout of far-right rallies drew in a loose, confused coalition of 4chan trolls, white supremacists, militiamen and everyday members of the right-wing “patriot movement.” But when Turano started looking around at posts online and saw some of the white supremacist symbology that’s been appearing at more rallies nationwide, he developed a new notion about what his new allies really believed.

“Racist ain’t too far from the truth,” he told the Vanguard.

Turano isn’t the first to retract his involvement as a centerpiece at alt-right rallies. The alt-right is cleansing itself of the “alt-light” — the pro-Trumpers considered insufficiently radical by those who want to see the alt-right become a white nationalist movement.

The Oath Keepers, one of the strongest organizations in the far-right militia movement, spent the first half of 2017 traveling the country to provide ad hoc security details for alt-right in the face of anti-fascist protesters. Eventually, the alt-right realized that the Oath Keepers were anti-racist and, like they did with Turano, tossed them to the side, calling them the “Boomer antifa.”

Now, when videos surface of Turano disavowing his appearances at anti-fascist brawls, the trolls show up to jeer and deride him as a “cuck.” America’s A-List of professional racists, like Richard Spencer and former KKK Imperial Wizard David Duke have called him out for his treachery.

Turano says he doesn’t need them.

“Most patriots are not Nazis,” Turano said while counter-protesting for Trump earlier this month. “But when we stand next to them, who are we? I think we’re collaborators of hate. Today’s message is that I can stand alone and be an American, and be for Trump, and I don’t need to stand next to Nazis to feel secure.”