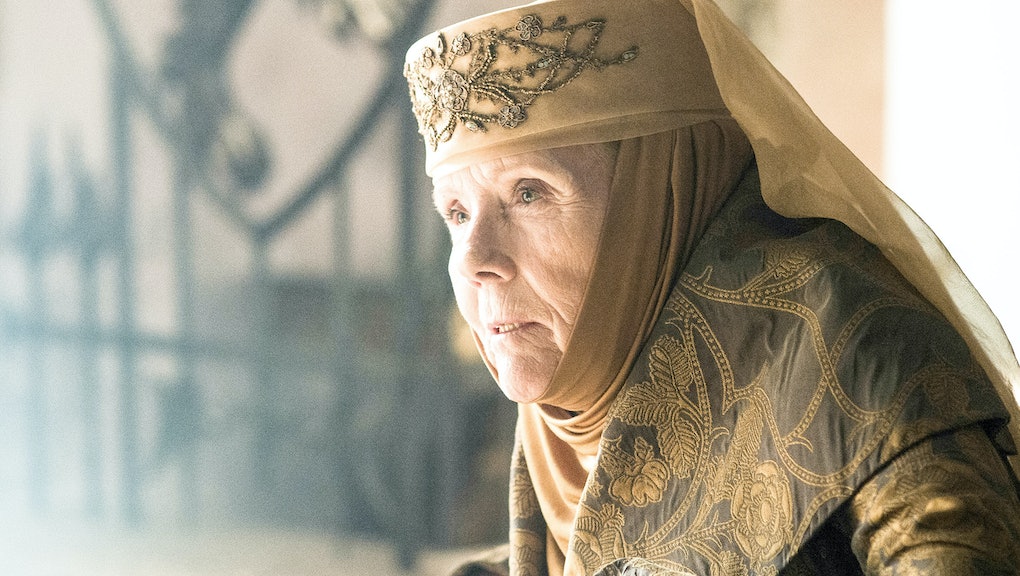 ‘Game of Thrones’: An obituary for Lady Olenna, the realest woman in the realm

The matriarch was in her 60s when she consumed poison offered to her by Ser Jaime Lannister. The act of mercy from Ser Lannister came after his forces stormed Highgarden, quashing the Tyrell rebellion in the name of Queen Cersei of the House Lannister, First of Her Name, Queen of the Andals and the First Men, Protector of the Seven Kingdoms. Though Lady Tyrell plotted against the throne in her final days, not too long ago she offered financial support to the Lannisters during a brief alliance.

Lady Tyrell was born into the House Redwyne, but took the Tyrell name after wedding Lord Luthor Tyrell, former Lord of Highgarden, Warden of the South, Lord Paramount of the Reach and head of House Tyrell, who died after riding his horse off a cliff while hawking. She was the mother to Mace Tyrell and grandmother to Loras and Margaery Tyrell.

Lady Tyrell’s rift with the Lannisters came amid a particularly tumultuous period late in her life. When her granddaughter, Margaery Tyrell, was betrothed to King Joffrey in the year 300 Aegon’s Landing, the matriarch moved to King’s Landing, the capital of the Seven Kingdoms. During her time there, she lent aid to the Lannisters during the War of the Five Kings, providing both gold and soldiers to ensure the family’s victory. During the wedding celebration of King Joffrey and Queen Margaery, King Joffrey was fatally poisoned. Speculation spread that Lady Tyrell was responsible for the murder, though those claims were never substantiated. However, she retreated back to her home in Highgarden soon after the Purple Wedding.

In the year 302 Aegon’s Landing, when Queen Margaery was imprisoned by the Faith Militant for her sins, Lady Tyrell returned to King’s Landing to advocate on her granddaughter’s behalf. Lady Tyrell made it known she believed then-Queen Mother Cersei was behind Queen Margaery’s arrest, though she continued supporting the crown nonetheless.

Shortly thereafter, in the year 303 Aegon’s Landing, Lady Tyrell was invited to sit on the Small Council to discuss Queen Margaery’s release. While some reports claimed the meetings were originally met with resistance by then-Queen Mother Cersei, the two ultimately worked together to successfully free Queen Margaery from the High Sparrow’s grasp. With her granddaughter out of the dungeons, Lady Tyrell returned to Highgarden once again. Queen Margaery and Loras remained at King’s Landing, however, where they were both killed in the tragic wildfire explosion that destroyed the Great Sept of Baelor.

In the end, Lady Tyrell betrayed Queen Cersei by siding with Daenerys Targaryen, offering her armies to help Targaryen take the Iron Throne by force. However, Lady Tyrell’s plans were foiled after Ser Jaime and his forces stormed the Highgarden stronghold.

With no known heirs to continue the Tyrell line, Lady Tyrell’s death marks the beginning of the end of House Tyrell.