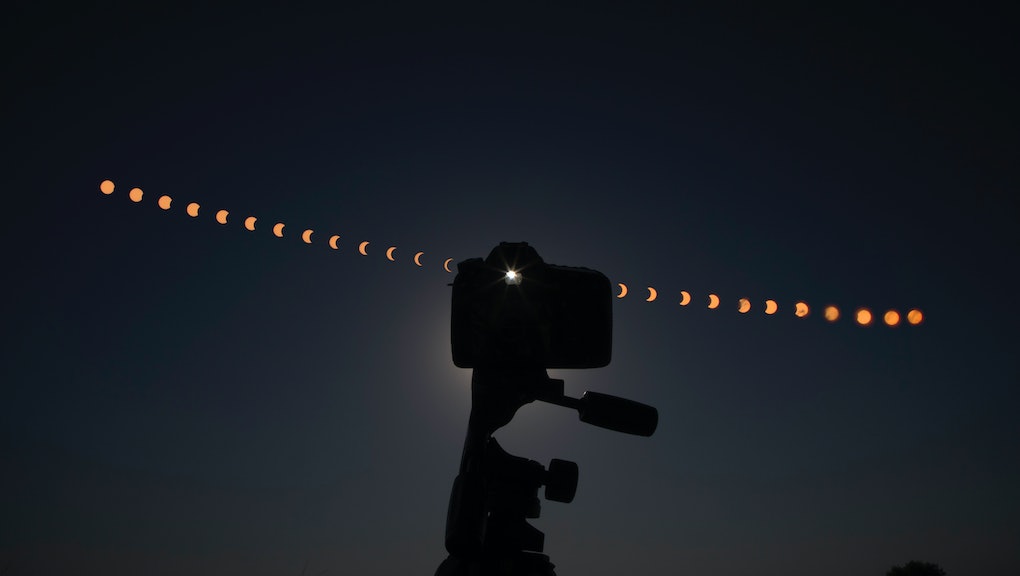 Want to be a professional eclipse photographer? This is what it’s really like.

On Aug. 21, photographers across the U.S. will train their lenses at the sun as the moon gradually blots it out. It takes a little specialized equipment and a lot of advance planning, and we got a behind-the-scenes taste of what it’s really like to photograph the phenomenon.

We called two photographers, Dave Henry and Ken Sklute, who are deep in preparations for the solar eclipse, which will be Henry’s sixth and Sklute’s first. Henry and Sklute teamed up to write a series of blog posts about eclipse photography for Canon if you’re looking for tips to get ready.

Henry photographed his first solar eclipse in 1979, from a park near his apartment in northern California, and said he’s been hooked ever since. “The first time you see a solar eclipse, you just don’t understand,” he said. “You realize that you’re nothing more than a speck.” He and a friend began teaching photography workshops for eclipse chasers. “I love things that are rare,” he said. “There’s nothing like a solar eclipse.”

For Sklute, solar eclipses fit perfectly into his photography interests — capturing what your eyes can’t necessarily see. At his first lunar eclipse, photographed from a desert in Arizona in 2013, “My jaw hung open for these few minutes,” he said, “I could see the Milky Way” in the middle of the day.

Henry also pointed out that every eclipse is different. The sun’s corona is always changing, so the prominences the moon reveals are different each time an eclipse reveals them. And how long each phase of the eclipse lasts changes as well, depending on precisely how the Earth, moon and sun align.

Here are Henry’s and Sklute’s words of wisdom if you think you might want to get into eclipse photography.

Plan ahead to capture the shot you’re looking for

Both Sklute and Henry already have detailed game plans for Aug. 21, which they’ll be spending in Casper, Wyoming.

Overall, Sklute is looking to tell the story of the change in the sky from full sun to totality and back to daylight. “My holy grail is getting a remarkable image of the corona with all the different rays coming out,” he said. “It takes a bit of deeper concentration.” He’ll be setting up four cameras, capturing still images, a timelapse and 4K video. That takes multitasking, to say the least. “We’ve got all these different elements that we’re trying to record at the same time and of course not spread ourselves too thin that we’re missing a beat.”

For this eclipse, Henry is turning his lens to the moon. “I actually want to see the reflection of the light off the Earth’s surface onto the moon,” he said. To catch that very faint light, he’ll need to set one of his five cameras to a very long exposure. The others will be automated and set to follow the sun.

Eclipses can be an excuse to travel to amazing destinations

Henry said his favorite location he’s visited for an eclipse was Namibia, despite the complicated logistics of getting heavy equipment out there. For that trip, he had to plan the images he wanted to capture based on the weight of his gear, since getting to the site meant flying on small planes. And while FedEx can offer photographers backup for Aug. 21, no such luck in Namibia. Because the airlines weigh bags but not customers, Henry said, “you wind up wearing two or three sets of clothes there, so you don’t have to worry about packing them.”

Thanks to his eclipse photography workshops, for one eclipse, Henry snagged a spot on a Caribbean cruise ship, which he calls “probably the most pleasurable eclipse experience” thanks to its sheer convenience. “We were all laying on deck chairs,” he said. “You could literally order something to drink while you were watching the eclipse.” The only downside, he said, is that he was startled when totality began and the ship started blowing its horn.

That was a very different experience to the one he had watching a total solar eclipse from a beach in Australia, where clouds nearly ruined his careful photography plans. Thousands of people had turned out to watch the event. “People respond differently, a lot of people will fall to their knees and start praying,” he said. Others will start “hoohaing like millennials do at a rock concert,” he added. “There’s not a universal response to it.”

Don’t expect to make a career on just eclipses

Although a total solar eclipse occurs somewhere on Earth every 18 months or so, it’s a little limiting not to want to photograph anything else. Sklute spends the rest of his time as a landscape photographer. He’s photographed star trails in the dark and chased both tornadoes and monsoons.

But one of his favorite phenomena to photograph is the aurora borealis. “It just shows up at will and dances across the sky,” he said. “You’re just praying, ‘Just give me a little glimpse of you and I’ll do my best to capture something totally unique.’”

He’s been across the Arctic photographing the aurora, which has required driving a two-ton vehicle out onto the ice covering a frozen lake, then getting out into -37 degree weather. Because the aurora is different to the east and to the west, he compares himself to the old cowboys with six-shooters. “I’m shooting two cameras at once and kind of yelling ‘yahoo’ at the sky,” he said. “It’s an amazing experience that really has you challenge your belief in life and the supernatural, if you will.”

Both Sklute and Henry know it’s easy to get sucked into concentrating so much on photography that you forget to actually look at the eclipse. “Our memory of the eclipse is either through a rectangle, the frame of your camera, or you’re so busy doing things that you never look up,” Henry said. He emphasized how important it was to “take some time out during totality to do nothing but sit and watch.”

Automated cameras and equipment can help with that. And remember, there are lots of people photographing the eclipse, so if your shots don’t pan out, you’ll still have evidence of the spectacle. “This will be the most photographed and visually observed eclipse in the history of mankind,” Henry said. “It’s literally nature’s gift to Earth.”

And he’s already planning for his next solar eclipse trip — to Chile in 2019.