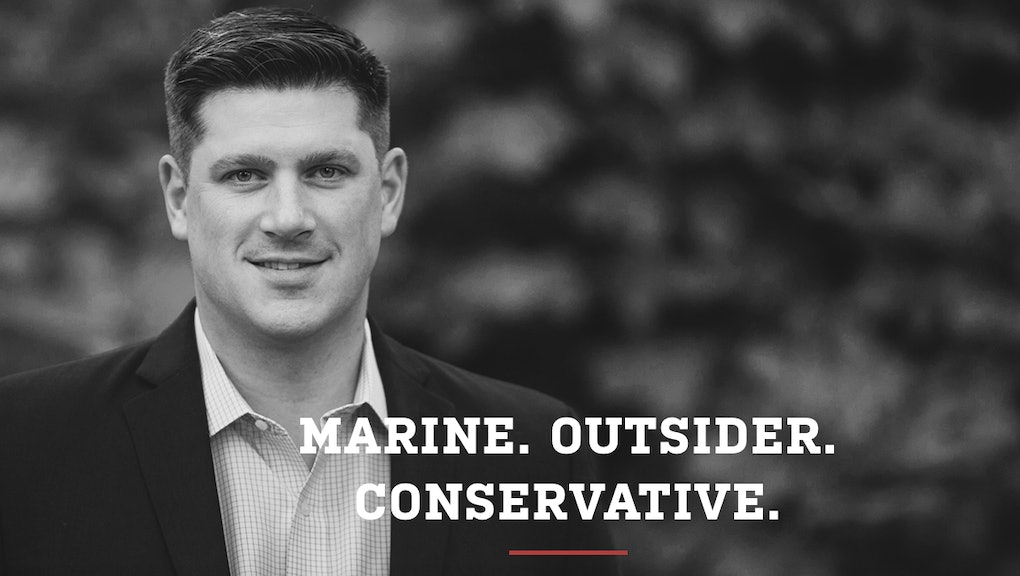 One Republican senatorial hopeful’s abortion-supporting past is coming back to haunt him.

According to the Minneapolis Star-Tribune, Wisconsin’s Kevin Nicholson — a 39-year-old Republican candidate for Senate who bills himself as “pro-life” — once requested a donation from EMILY’s List, an organization dedicated to launching women’s reproductive rights advocates in political careers.

Mic has also obtained a copy of a letter Nicholson, who was president of the adamantly pro-abortion rights College Democrats of America at the time, wrote on June 28, 2000. In the letter, Nicholson says that he “enjoyed ... remarks of women’s activism” that then-political director Sheila O’Connell made during a previous visit to George Washington University. Asking O’Connell for a $10,000 donation from EMILY’s List, he also speculated that there was “great potential for a strong partnership” between the organization and the CDA.

That’s not the only hint of pro-abortion leanings lurking in Nicholson’s history. About a month and a half after he faxed his letter to EMILY’s List, he spoke at the Democratic National Convention and declared his support for “a woman’s right to choose.”

It’s not exactly surprising that, to get Republican votes in today’s political climate, a candidate would have to disavow abortion. That hasn’t always been the case, though; in fact, despite the fact that the GOP platform clearly states that the party “affirm[s] the dignity of women by protecting the sanctity of human life,” many Republicans — even high-profile Republicans — don’t adhere to anti-abortion ideology.

But as the party skews further and further right (thanks in no small part to President Donald Trump’s effort to win the evangelical vote), and as abortion becomes entrenched as a political bargaining chip, it’s hard to imagine a Republican winning a seat in an abortion-phobic Senate without espousing some degree of disapproval for the procedure.

Neither Nicholson nor his spokesperson, Michael Antonopoulos, had returned request for comment by Tuesday afternoon, so we cannot say for sure why Nicholson chose EMILY’s List to be a partner. Speaking to the Star-Tribune, though, Antonopoulos blamed the embarrassing moment of apparent flip-flopping on the Democrat who currently holds the Senate seat Nicholson would like to occupy.

“It’s pathetic to see Tammy Baldwin and her liberal allies dredging up decades-old material from Kevin’s college days,” Antonopoulos said. “As the father of three children and a combat veteran who has seen innocent life destroyed, Kevin has made clear why he is strongly pro-life today.”

And indeed, that’s more or less his campaign line. Nicholson’s website explains that “in both Iraq and Afghanistan, Kevin [a former Marine] saw innocent lives lost. Kevin values life because he knows firsthand how precious it is.”

Of course, college is a time for experimentation, and we all do some embarrassing things when we’re young. Nicholson has since explained the DNC speech line as something he just said without ever having considered the issue, and against his wife’s advice. He now insists that he is “for every bill that moves us closer to pro-life.”

EMILY’s List remains skeptical, viewing the purported change of heart as typical political pandering, a look that doesn’t exactly suit a man who identifies himself as a Washington outsider.

“The message it sends is that, like a typical politician, Kevin Nicholson is trying to say whatever will help him win the most votes in his Republican primary race — and frankly, that shouldn’t sit well with Wisconsin voters,” Bryan Lesswing, director of campaign communications at EMILY’s List, said in an email.

Lesswing also pointed out that Nicholson has had a rough time convincing his party he isn’t a secret Democrat. In 2008, he was reportedly registered as a Democrat in North Carolina, and although he claims to have voted “no preference,” the records show that no in-person voters from Nicholson’s district cast that vote. They also show that Nicholson was an in-person voter.

Whatever Nicholson’s true colors, it is true that considering recent trends, anti-abortion may be what wins him a Senate spot. In fact, it might win you a Democratic seat, too.