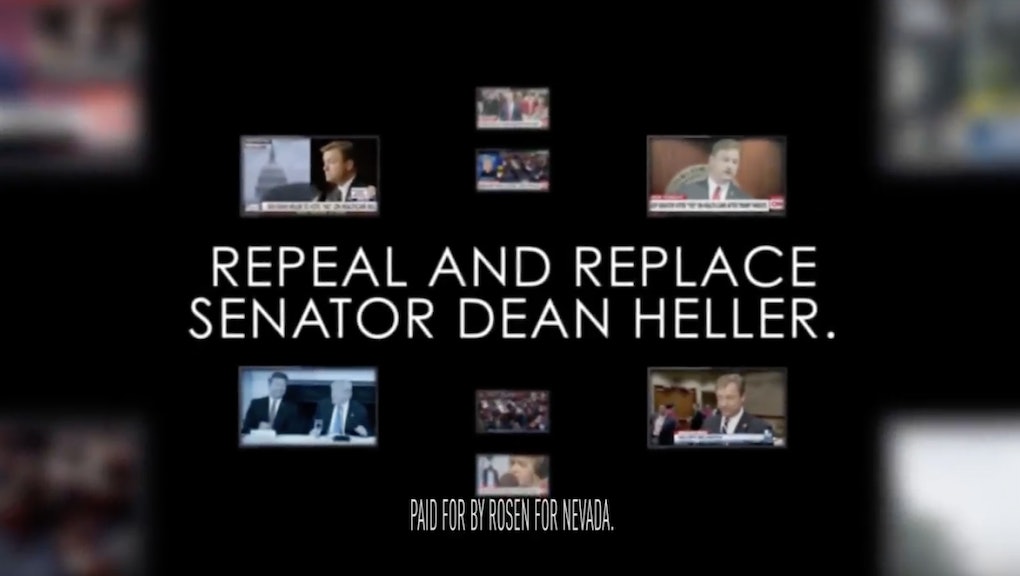 Obamacare repeal failed, but Democrats are running ads to inflict pain on Republicans who voted yes

Senate Republicans may have failed to make good on their seven-year promise to repeal and replace the Affordable Care Act last week, but Democrats aren’t going to let those who voted “yes” off the hook.

Sen. Dean Heller (R-Nev.), the only Republican senator up for re-election in 2018 in a state Hillary Clinton carried at the presidential level, is bearing the brunt of the attacks. Heller voted for the so-called “skinny repeal” bill that failed early Friday morning, despite having publicly pledged not to vote for any health care bills that increased the number of the uninsured.

The nonpartisan Congressional Budget Office estimated the skinny repeal would have caused 16 million people to lose their insurance and would have raised premiums by 20%. That handed Democratic Rep. Jacky Rosen, who is running for Senate against Heller next fall, a ready-made attack ad.

Rosen’s ad uses Heller’s own words against him. The ad plays a clip of Heller coming out against an initial version of the Senate Republican health care bill.

“I’m telling you right now I cannot support a piece of legislation that takes insurance away from tens of millions of Americans and hundreds of thousands of Nevadans,” Heller says in footage from a news conference in which he denounces the legislation.

The ad then goes on to play footage of President Donald Trump sitting next to Heller at a White House meeting with every GOP senator. In it, Trump threatens Heller if he doesn’t support the repeal. A final screen on the ad instructs voters to “repeal and replace Senator Dean Heller.”

Rosen isn’t the only group running ads against Heller.

Save My Care, an advocacy group hoping to build support for the ACA as Republicans attempt to dismantle it, ran ads using footage from Heller’s press conference denouncing the repeal attempts to get him to vote no on future repeal bills.

According to the poll, 75% of voters want Trump and the GOP-controlled Congress to improve the ACA rather than repeal or sabotage it, as Trump has suggested he’ll do.