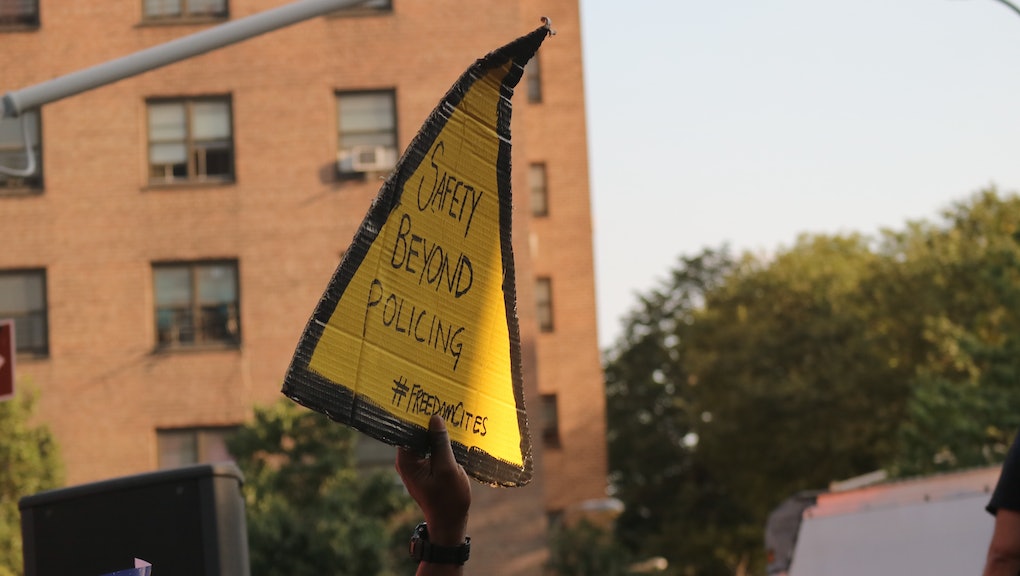 BRONX, NEW YORK — People across the country participated in Night Out for Safety and Liberation events in 30 cities on Tuesday to demonstrate how they imagine a community without police violence. In the Bronx borough of New York City, NYC Freedom Cities and the New York Worker Center Federation hosted its own NOSL action.

Night Out for Safety and Liberation events began in 2013 as a response to the fatal shooting of Trayvon Martin and the violence inflicted on black and brown communities by police. The event’s guiding mission is to promote the idea that police-focused solutions cause harm to people of color and don’t lead to better or safer communities. It also serves as a response to the annual National Night Out held by police departments across the country that aim to foster better relations between police and communities.

“The police do this community picnic [Night Out] every year and what it does is try to create some legitimacy with the community,” Albert Saint Jean, an organizer with Black Alliance for Just Immigration, said in an interview with Mic. “The thing is that it’s superficial legitimacy. Maybe a short while from now they’ll go back to arresting the whole neighborhood.”

The South Bronx has a history with police brutality. In 1984, Bronx police shot and killed Eleanor Bumpurs, a mother of seven, after responding to a call about an eviction dispute; in 2014, Santiago Hernandez was beaten by police while standing in front of an apartment building in the Bronx.

Freedom Cities and the WCF hosted the event in Brooks Park, a community park in the South Bronx, and invited protesters and community members to gather and get to know each other. The event focused heavily on inclusion with members from multiple community rights organizations such as the Black Youth Project, the Street Vendor Project and the Retail Action Project.

Organizers and attendees also emphasized that public safety goes beyond freedom from policing. For them, it includes affordable housing, education, job opportunities, healthy food and access to health care.

“If you invest in the community, give us better schooling,” the Retail Action’s Project’s Jennifer Osula said in an interview. “Give us better access to work. We will do so much for ourselves. Prevention is better than a cure.”

“If we stand together, we have more power,” Poli, a member of Freedom Cities and protestor in the rally, said. “A free city means to have protection for whatever happens, to have freedom and to care for one another.”

As a street vendor, Poli said he has experienced police harassment, adding that it’s time for communities to come together and create a safer environment.

Just down the street from the NOSL event, police officers held their own cookout, promoting a different view of community on their National Night Out. NOSL attendees and organizers marched down the block to the police event, chanting in both English and Spanish: “Ain’t no power like the power of the people ‘cause the power of the people don’t stop” and “Unity is power.”

After the action, protesters made their way back to Brooks Park and enjoyed a community cookout sponsored by the Street Vendor Project. As people ate, community members shared testimonies and poems to close out the event on a peaceful note.