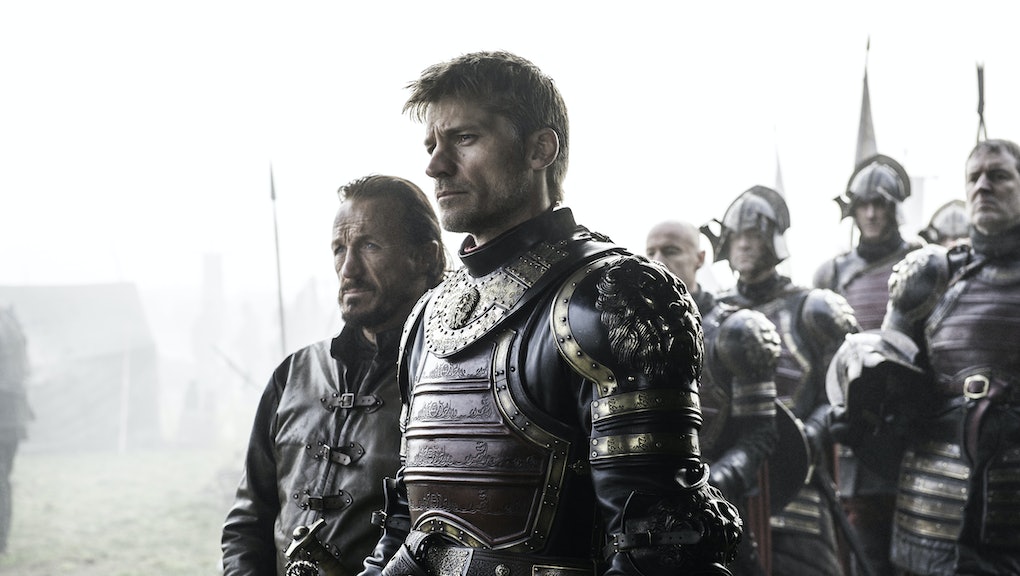 ‘Game of Thrones’: Here are 2 ways Jaime Lannister could take the Iron Throne

Kingslayer, Oathbreaker, Man Without Honor — Ser Jaime Lannister has collected more than a few unbecoming monikers throughout his life. Born into notoriety as the twin brother to Cersei Lannister, he sealed his infamous reputation after stabbing Aerys Targaryen, aka the Mad King, in the back. He also got off on the wrong foot with Game of Thrones viewers: In the show’s first episode, he shoves poor Bran Stark from the top of a dilapidated tower after the young boy discovers his incestuous relationship with Cersei. Over the course of the first few seasons of Thrones, Ser Jaime does little to regain his dignity, but as his story has progressed, so has his character.

Jaime has proven time and again that he’s not the villain he portrays himself to be. In season three, he loses his hand while trying to save Brienne from being raped by their captors. That same season, he jumps into a bear pit to save Brienne from being mauled to death. In the fourth season, he frees his brother Tyrion from a dungeon in King’s Landing, preventing his execution. In the most recent episode of Thrones, he offers Lady Olenna Tyrell poison in lieu of being flayed alive as Cersei wanted. He’s still not perfect, but he’s a far cry from the vengeful, tyrannous likes of his sister. Odds are that he’d make a better rule than her (though, admittedly, that’s not the highest bar to clear).

So with the war between Queen Cersei and the Mother of Dragons more or less in full force — and since we’re doing an ongoing series explaining how different characters could rise to the Iron Throne — now’s a good time to explore how Ser Jaime Lannister could potentially blindside the main players in Thrones and become the ruler of the Seven Kingdoms. Below are two scenarios that could end with Jaime on the Iron Throne.

Scenario 1: Wait out the war

There’s hardly a whisper of hope for Jaime usurping Queen Cersei — she’s done an excellent job cementing her position, and she also has a hulked out, reanimated Mountain as her personal bodyguard. (He also doesn’t have someone like, say, Littlefinger to help arrange a network of alliances.) But a little patience on his part could go a long way toward taking the Iron Throne.

The war for control of the Seven Kingdoms is underway, bringing with it untold death and chaos. But as Littlefinger once said, “Chaos isn’t a pit. Chaos is a ladder.” And if Jaime plays his cards right, he could very well climb it to the top.

Take, for example, Queen Cersei’s rise to power. She eliminated all of her local enemies in one fell swoop by trapping them in the Great Sept of Baelor and burning them alive with wildfire. Her son, King Tommen, died by suicide moments later. With no one left to claim control, Cersei sauntered through the Red Keep and into the throne room, donning the crown without so much as raising a single sword. The clash between Queen Cersei and Daenerys could render similar results: If the conflict claims the lives of most of its major players, Jaime could be free to follow in his sister’s footsteps.

However, even if both Queen Cersei and Daenerys Targaryen fall during battle, there’s still a handful of problems Jaime would need to immediately contend with, foremost among them being Euron Greyjoy. Euron claims to be the greatest captain in the 14 seas, and he’s proved his mettle, defeating Yara and her Iron Fleet with little difficulty. He’s clever, merciless and resilient, and it’s unlikely that he’ll be bested in battle. If Queen Cersei is out of the picture, Euron will go for the Iron Throne the first chance he gets. Jaime needs to kill him first.

There’s also the issue of the Starks, who have a claim for power that predates the Iron Throne by thousands of years. With the Iron Throne vacant, one or more of them could make a play to seize it for themselves. Arya Stark could potentially become queen, but she doesn’t seem to have much of a desire for anything besides vengeance and family; and Bran Stark can’t rule anything, because he’s the Three-Eyed Raven, so they’re not much a threat. Jon Snow barely likes being the King of the North, so it’s unlikely he’d vie for the Iron Throne. But Sansa Stark, on the other hand, has a real shot at taking Cersei’s place as queen of Westeros. Jaime could try to snuff out the entire Stark line once and for all (the other Starks wouldn’t stand for him killing Sansa), but the best way for him to beat any challengers from the North is to follow his patience with swiftness. Once the pieces fall, Jaime needs to pick them up as quickly as he can and solidify his position.

If Queen Cersei is victorious against Dany, Ser Jaime will need a lot more than patience to end up on the Iron Throne: He’ll have to make good on an age-old prophecy about Cersei’s death-by-brother. The fifth season of Thrones opens with a flashback to Queen Cersei as a child. She wanders through the woods and meets a witch who says the young Lannister will be queen for a time, only to be replaced by someone more beautiful. The soothsayer also accurately predicts King Robert Baratheon’s infidelity, and that Cersei will have three children with her brother. However, there’s one revelation from the books that the TV version left out: that Cersei will be killed by her younger brother. Since Jaime is technically younger than his twin sister by several minutes, him becoming a Queenslayer might be a matter of destiny.

But what would compel Ser Jaime to turn on the person he loves the most? Maybe a sense of duty. He’s watched as Queen Cersei has grown increasingly wicked and cruel, each of her decisions leading her down a path reminiscent of the Mad King. With each passing day she seems more concerned with maintaining her position and destroying her enemies, and less concerned about the welfare of the people in her kingdom. If Cersei doesn’t change course, she’ll soon end up becoming the Mad Queen — and perhaps Jaime will be compelled to kill her (just as he did the Mad King) for the good of the realm.

In this scenario, let’s presume that Cersei does end up defeating Dany in their war over the Iron Throne. Cersei is, after all, a brilliant tactician and right now she’s got Dany on the ropes — if there’s anyone who could stop the Mother of Dragons, it’s Cersei. But after she pulls that off, does anyone honestly think it’s likely that Cersei will take a lighter touch as ruler of the Seven Kingdoms?

So, assuming she gets further out of control and that Jaime makes good on the witch’s prophecy, that leaves the Iron Throne up for grabs. If Jaime hopes to succeed his sister-lover, then, again, he’s got to move fast. Basically, he has to strike the moment word comes in that Lannister forces have prevailed. Remember: Queen Cersei promised Euron she’d marry him once the war was won, and it wouldn’t be surprising if Euron’s first act as king would be to kill his new bride and Jaime, leaving him with all of the power. If Jaime ends up killing his sister, it’d be wise for him to take out Euron as well.

With Queen Cersei dead, Jaime would likely have a strong claim for the Iron Throne. And with Euron eliminated, he could sit on it comfortably without immediate threat of being murdered himself.

Jaime, while not without his flaws, would be a far better ruler of the realm than Cersei. The question is whether he’ll put himself in the position to usurp the woman he loves.