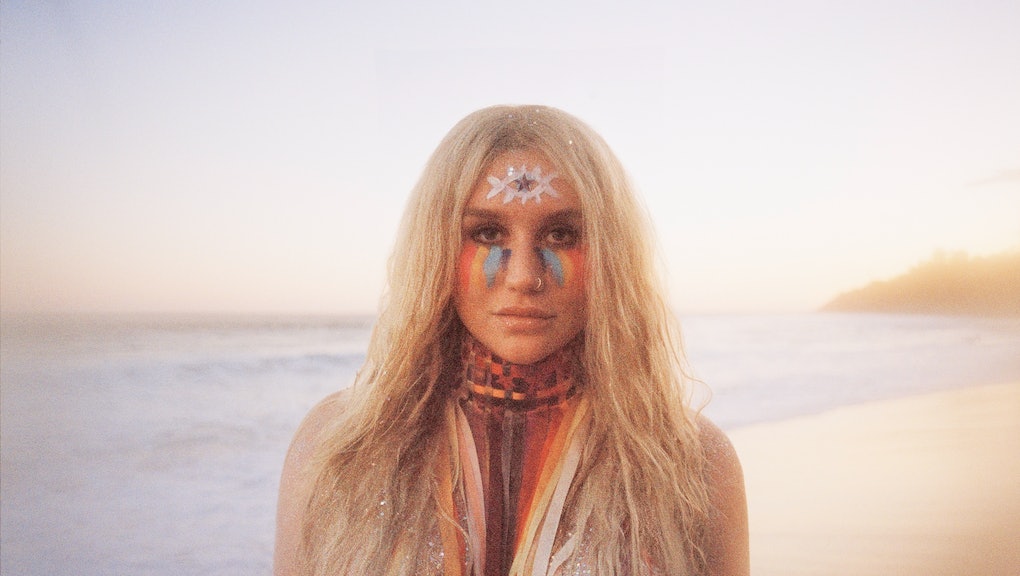 (Editor’s note: On Aug. 11, beloved pop singer Kesha will return with Rainbow, her third full-length album and first since 2012’s Warrior. In the run-up to the record’s release, Kesha has shared a few songs from the upcoming LP — “Praying,” “Woman” and “Learn to Let Go” — along with several essays about her creative process and personal growth. Now, in tandem with the release of yet another track, “Hymn,” Mic presents a new, original essay from the songwriter herself.)

Probably the most powerful experience I’ve ever had as an artist is having fans come up to me and tell me that a song or album of mine has helped them through hard times. Some of them have gone as far as to tell me that my music helped save their lives. This is hard for me to comprehend, and for as long as I live, no other honor will ever match that. Hearing those words from fans has changed me.

That’s how I have always felt myself — there was never one group or scene that was entirely mine. The lyrics are, “This is a hymn for the hymnless, kids with no religion.” Religion, for me, in this song doesn’t mean necessarily religion as in your spiritual belief, but more like kids with no set way of life. I’m still trying to figure out what I believe and what the truth is in my heart, and I know I’m not alone. My mind and opinions keep changing and expanding.

I think there has never been a more important time for dreamers to be outspoken about their beliefs. I was recalling times I’ve gone out into the streets over the last year to make known how I feel about certain issues when writing lines like, “Go on, read about us in the news ... After all we’ve been through/ No, we won’t stand and salute ... If we die before we wake/ Who we are is no mistake/ This is just the way we’re made.” I personally will never stop fighting for equality for all humans. That is the passion behind this song. This song is dedicated to all the idealistic people around the world who refuse to turn their backs on progress, love and equality whenever they are challenged. It’s dedicated to the people who went out into the streets all over the world to protest against racism, hate and division of any kind. It’s also dedicated to anyone who feels like they are not understood by the world or respected for exactly who they are. It’s a hopeful song about all of these people — which I consider myself one of — and the power that we all have when we all come together.

I wrote the song with my mom (Pebe Sebert), Cara Salimando, Jonny Price and the galactic genius Ricky Reed. Because of the subject matter of this song, I had to work with my mom on the lyrics — like me, her head lives high above the clouds in outer space. I’m a fragile soul for this world — I feel like I live by something unexplainable and magical in outer space. I love the idea of people with similar philosophies being brought together, and that was one of the inspirations for this song.

I hope this is one of those songs that will find and connect with people who feel like outcasts, especially young people today growing up with the omnipresent internet. I really feel for them, because bullying today is so scary due to all of the technology. It breaks my heart to hear about kids being bullied online at such a young and sensitive age. I believe no one should be subjected to harassment and hate, and that includes online. I know from personal experience those kinds of comments can be much more than hurtful. They can really mess up one’s self-confidence and self-worth. So when I sing the words to this song, I do so as a reminder to myself as much as anyone that we can’t let the haters and the negativity win. We know “that we’re perfect, even if we’re fucked up.” We are all “dreamers searching for the truth,” and we know the unexplainable universal goodness in people — their innate love and light and compassion for one another — will bring us together to do great things.

Kesha is a musician.