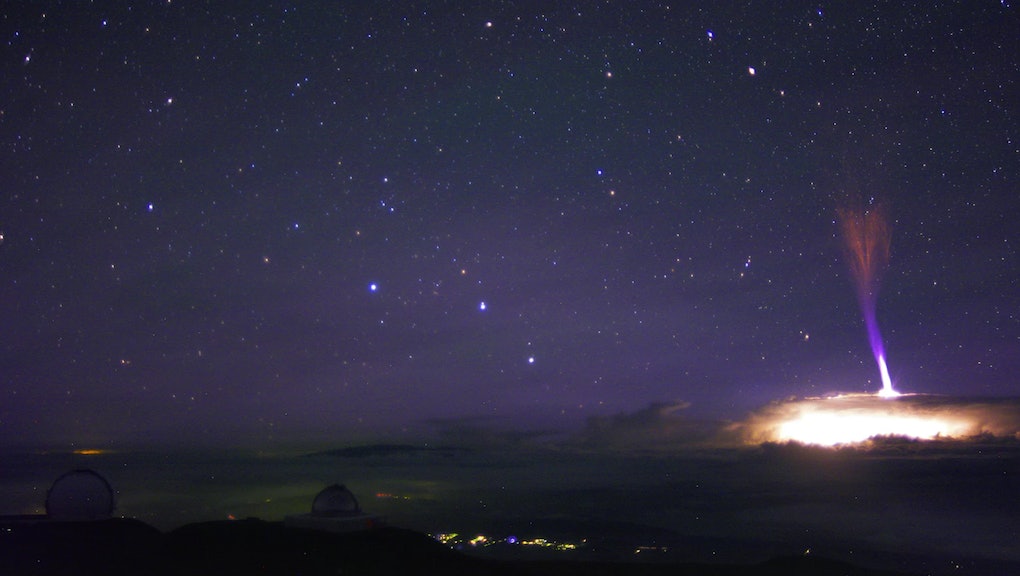 The Gemini Observatory’s cloud camera on Mauna Kea in Hawaii captured rare footage of lightning on July 24. There are various different types of lightning and the time-lapse video showcases a type called jet lightning breaking out on top of a blanket of storm clouds.

“This amazing lightning-like phenomenon is known as a gigantic jet,” Frankie Lucena, who processed the video, told SpaceWeather.com. “They are related to sprites [sprites are ‘bursts of electrical energy’], but more powerful and easier to see with the naked eye.”

Jet lightning takes place high in the atmosphere. According to Live Science, this specific type of lightning may be the tallest kind in the world.

“More than 50 miles above Earth’s surface, extreme ultraviolet radiation from the sun reacts with air molecules to produce highly charged particles in a region near the edge of space known as the ionosphere,” Live Science reported. “In 2001, scientists discovered gigantic jets of lightning arcing up from clouds in the lowest portion of the atmosphere, the troposphere, to the ionosphere. Researchers have since found they can leap up 50 to 56 miles (80 to 90 km). The bottoms of gigantic jets appear similar to blue jets [a different type of lightening], while the tops resemble sprites.”

Only a few dozen gigantic jets have been seen, and they’ve all been over an ocean. In fact, Peter Michaud, Gemini Observatory public information and outreach manager, told KHON2 that gigantic jets are so rare they were considered to be a myth until they were first photographed in 1989.

The recent footage was acquired by Lucena, who enhanced the colors to spotlight the lightning.

“The ripples in the sky high above the storm clouds are what is known as gravity waves,” Lucena said on YouTube. “These gravity waves are located very near the ionosphere at about 90 km.”