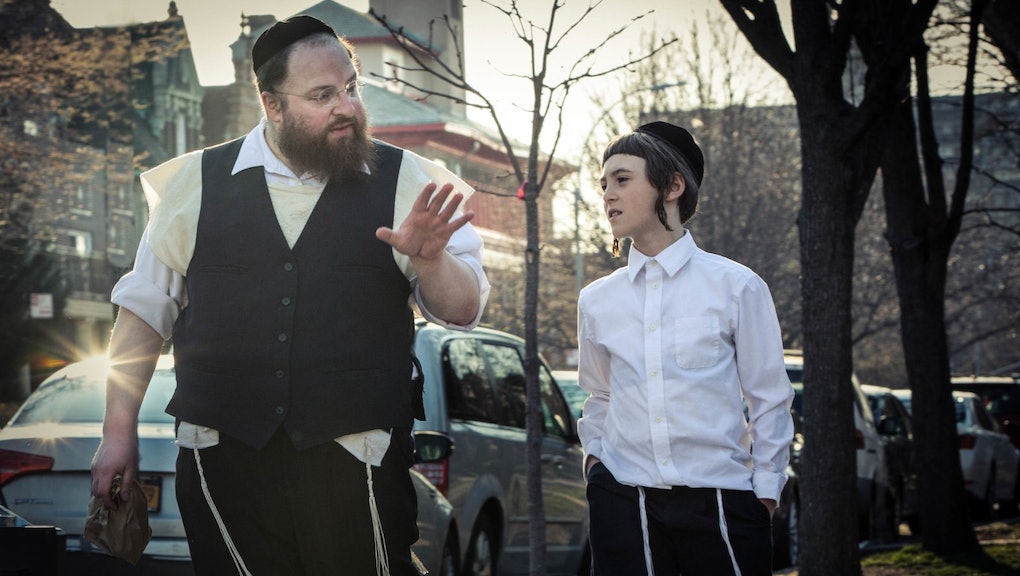 ‘Menashe,’ a Yiddish-language Sundance hit about a widowed father, will break your heart

A24’s Menashe is a rarity. The chic indie distributor’s first foreign-language acquisition, picked up after its January premiere at Sundance, is a film about a single Hasidic father living in Brooklyn’s Borough Park neighborhood; it features a cast of Hasidic actors and is entirely in Yiddish. That last detail is an impressive feat, considering you’re unlikely to meet a young person today who can say something in Yiddish other than “schmuck” and “shvitz.”

The titular character, played by newcomer Menashe Lustig in a role largely based on his life, is a good-hearted but lazy and immature man who works at a grocery store, lives in a tiny, under-furnished apartment and has trouble caring for his young son. We learn early on that the one-year anniversary of his wife’s death from an unsaid illness is approaching. The people in his community — including his wealthy, no-nonsense brother-in-law and the Ruv (the head rabbi, more of a theocrat than your average religious leader) — think Menashe should remarry. They insist a two-parent household is best for his boy, Rieven, and threaten to strip Menashe of custody if he doesn’t find a wife soon. Single parenting carries such stigma that the Ruv, making it sound like some sort of contagion, mentions the possibility of Rieven being kicked out of school if Menashe doesn’t get his act together.

Given that Hasidic communities are famously closed off to the secular world, Menashe offers a particularly unique perspective, and the love from director Joshua Weinstein — who spent seven years working on this passion project, his narrative feature debut — is apparent in his commitment to capturing the practices, politics and day-to-day life of an Orthodox Jewish community. Adopting a distant, almost documentary style, Menashe is a simple and straightforward portrait of a man and his world. But it also offers a veiled critique of — or, at the very least, a gentle commentary on — an institution that’s foundational to Orthodox Judaism: marriage.

As with other major Western religions — particularly the more conservative branches — marriage is defined in Orthodox Judaism as a union, blessed by God, between a man and a woman. It becomes a responsibility, and the weight of its significance hangs over Menashe. But this is far from the first film to deal with this particular dynamic. Movies like Rama Burshtein’s 2012 feature Fill the Void; Amos Gitai’s 1999 picture Kadosh; and Israeli directors Ronit and Shlomi Elkabetz’s Viviane Amsalem trilogy (which consists of 2004’s To Take a Wife, 2008’s Shiva and 2014’s Gett: The Trial of Viviane Amsalem) all concern themselves with the duties and sacrifices that Orthodox Jews bring to marriage.

But what makes Weinstein’s feature stand out within this lineage is the film’s tender approach — he isn’t heavy-handed in his treatment of the subject matter. Menashe doesn’t consider leaving his faith or running away with Rieven; he’s still a devout Jew who respects and loves his religion and community, even if he doesn’t want to conform or succumb to pressure from those around him. Compare that to Kadosh, which plays like a Shakespearean tragedy, complete with suicide and the lowered expectations of a marriage done out of obligation.

The reason Menashe is reluctant to get remarried is that his marriage to Rieven’s mother was arranged and, for the most part, unhappy. He’s not interested in making another major commitment simply for the sake of doing so. At one point, he’s set up on a blind date with a widowed woman who’s blunt about her expectations. She doesn’t talk about love; she wants to know what he does and what their life would look like together — this is essential to being a good Jew. It’s her duty.

What Weinstein communicates — through brief scenes in which Menashe reflects on his relationship to Rieven’s mother — is that an unhappy marriage is more likely to be damaging to Rieven than being raised by a single parent. Now, Menashe is far from a perfect dad. He’s frequently sloppy, can’t afford to buy Rieven clothes, gets him to school late and, having no food at home, feeds him some cake and Diet Coke for breakfast. But he loves his son; that much becomes clear as Menashe struggles to prove to his peers that he’s got his life together. Things probably would be a bit more organized if Rieven had a mother figure around, but Weinstein makes it easy to admire Menashe’s hustle.

At one point in the film, Menashe hosts a gathering in his apartment to honor the anniversary of his late wife’s death. He gets everything together but accidentally burns the kugel, leaving his family trapped in a smoky apartment with nothing to eat but a blackened delicacy. He’s failed in their eyes — and maybe in his own — but does this make him an unfit father? He’s trying, he means well and if he does ever marry again, he wants it to be for love. Menashe argues that should be enough.