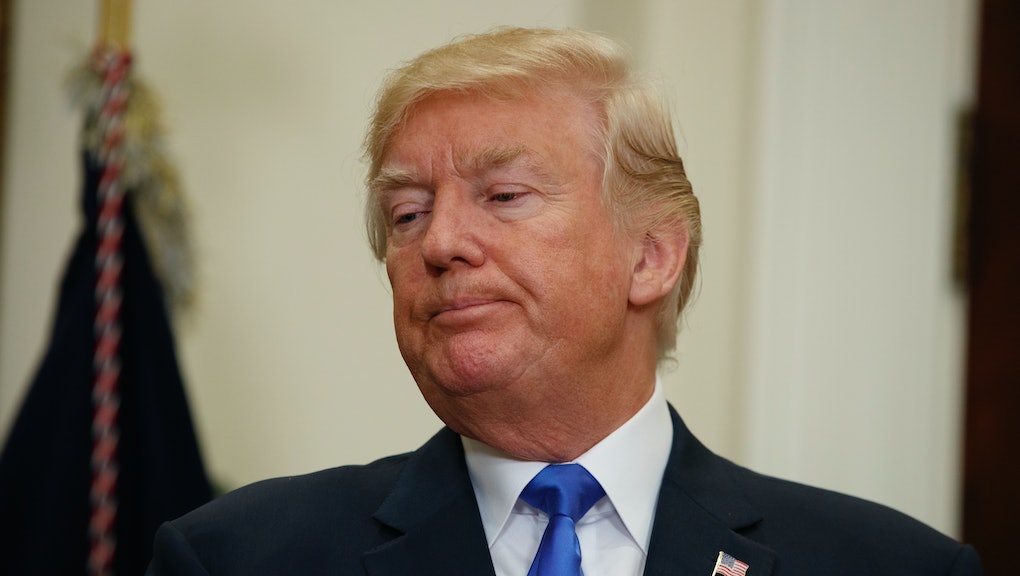 5 of the most damning quotes from Trump’s conversations with the leaders of Mexico, Australia

The Washington Post on Thursday published transcripts from President Donald Trump’s phone calls with the leaders of Australia and Mexico that took place in the early days of his presidency.

The transcripts suggest that Trump knew Mexico was never going to pay for the border wall, despite his insistence on the campaign trail. They also show that he knew that fact would come back to hurt him with his supporters.

But that wasn’t the only revelation from the transcripts.

Here are the five most damning quotes and admissions Trump made during his phone call with Mexican President Enrique Peña Nieto and Australian Prime Minister Malcolm Turnbull.

1. “You cannot say anymore that the United States is going to pay for the wall.”

Trump effectively acknowledged in his call with Peña Nieto that he knew Mexico wasn’t going to pay for the border wall he promised on the campaign trail. But he begged Peña Nieto to stop saying that publicly, as he knew it would not only hurt him politically, but would hinder his ability to negotiate funding for the project.

“Mr. President — let us stop talking about the wall,” Peña Nieto told Trump, according to the transcript. “I have recognized the right of any government to protect its borders as it deems necessary and convenient. But my position has been and will continue to be very firm saying that Mexico cannot pay for that wall.”

Trump went on to threaten Peña Nieto if he kept saying that Mexico wasn’t going to pay.

“If you are going to say that Mexico is not going to pay for the wall, then I do not want to meet with you guys anymore because I cannot live with that,” Trump said.

During a conversation about drugs coming across the border into the U.S., Trump took a swipe at New Hampshire.

“We have the drug lords in Mexico that are knocking the hell out of our country,” Trump said to Peña Nieto. “They are sending drugs to Chicago, Los Angeles, and to New York. Up in New Hampshire — I won New Hampshire because New Hampshire is a drug-infested den — is coming from the southern border. So we have a lot of problems with Mexico farther than the economic problem.”

However he lost the state in the general election to Hillary Clinton by less than 1%.

3. “I am the world’s greatest person that does not want to let people into the country.”

Trump’s conversation with Turnbull — the leader of one of America’s strongest allies — was particularly tense and uncomfortable.

Turnbull was trying to ensure that Trump would uphold a deal to accept 1,250 refugees from Australia — assuming they passed U.S. vetting standards. And Trump was furious.

“I just called for a total ban on Syria and from many different countries from where there is terror,” Trump told Turnbull.

“And I am saying, boy that will make us look awfully bad,” Trump continued. “Here I am calling for a ban where I am not letting anybody in and we take 2,000 people. Really it looks like 2,000 people that Australia does not want, and I do not blame you, by the way, but the United States has become like a dumping ground.”

But Turnbull wasn’t budging, pushing Trump to agree to the deal that had been made with former President Barack Obama.

That’s when Trump blew up.

“This is going to kill me,” Trump said. “I am the world’s greatest person that does not want to let people into the country.”

4. “Are they going to become the Boston bomber in five years?”

The fight over the refugee deal continued, and Trump was getting more and more upset. He began to question who the refugees were and what Australia knew about them.

“Does anybody know who these people are?” Trump asked. “Who are they? Where do they come from? Are they going to become the Boston bomber in five years? Or two years? Who are these people?”

Turnbull went on to explain to Trump why Australia couldn’t let them in.

“The only reason we cannot let them into Australia is because of our commitment to not allow people to come by boat. Otherwise we would have let them in,” Turnbull said. “If they had arrived by airplane and with a tourist visa then they would be here.”

But that didn’t mollify Trump.

“We are like a dumping ground for the rest of the world. I have been here for a period of time, I just want this to stop. I look so foolish doing this,” Trump said.

Trump went on to ask for assurances that the refugees would not become the Boston bombers, to which Turnbull reminded Trump that the two men who bombed the Boston Marathon were from Russia.

“They were from wherever they were,” Trump said.

At the time of his phone call with Turnbull, Trump had already had a marathon session of phone conversations with other world leaders.

But the call with Turnbull was one of the most tense.

After a prolonged conversation over the refugee issue, Trump spat at Turnbull: “I have had it. I have been making these calls all day and this is the most unpleasant call all day. Putin was a pleasant call. This is ridiculous.”