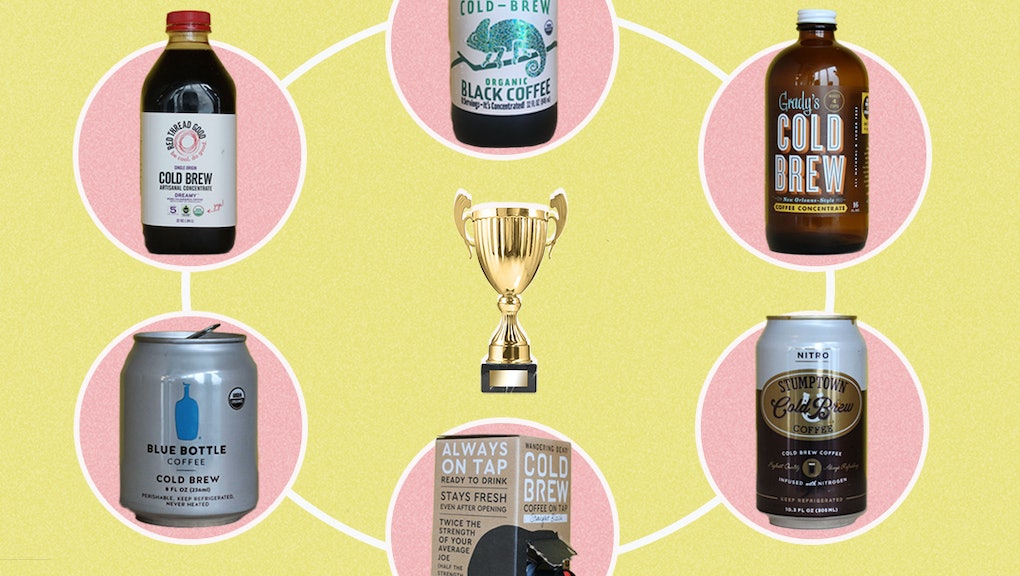 Taste test: The best cold brew you can buy

Summer is simply unimaginable without a glass of cold brew. It’s the reason why Mic decided to stage our own blind taste test of six brands. We sampled six small servings of cold brew (and endured a few hours of jitters) in order to bring you our finest insights on the buzz-inducing beverage. The pricing below is based on national cost (as determined on each brand’s website) when available. If not, it was calculated based on the price at a New York City Whole Foods.

Setting up the test

We poured samples of six cold brew products and asked eight staffers, two of whom are former baristas, to judge each cup based on sweetness, body, acidity, flavor and aftertaste.

For each of the five qualities, participants took notes and assigned a score from one to five based on personal preference. Then, they summed these up to create a total score for each brew. (A perfect score was 25.)

Since we were testing cold brew concentrates (save for Stumptown’s brew), we asked staffers to take a sip and only dilute the brew with water after, if they cared to. We decided against diluting with milk in an attempt to control variables, so please take our results with a grain of salt — or a splash of skim, if you will.

We were somewhat shocked that this revered name in coffee placed last. Blue Bottle sells portable mini cans of cold brew that are meant to be diluted with water.

Our testers didn’t love how sweet it was compared to other brands. “Too sweet, cloying like a malted milk ball,” one tester wrote. Another noted the sweetness reminded her of “burnt maple.” Several tasters rated it with low scores and others placed it middle-of-the-pack, which is why it scored so low. But there were some fans among us. One person liked the “chocolatey” flavor and found it wasn’t too acidic. Another noted it was “light against the tongue” and had a nice weight to it.

This Austin, Texas, company is big on values — it’s certified organic beans are carefully sourced from farms that promote farmer welfare. The 32-ounce bottle of concentrate recommended we mix 4 ounces of concentrate with 4 ounces of liquid (water, milk or a combo).

Testers described the taste of Chameleon as “bitter, nutty and woody.” Meanwhile, the acidity was a hit — one person described it as “almost like a pickle,” but in a good way. The aftertaste was described as “pleasant” by one tester and “too flowery” by another.

The only coffee in the test that wasn’t strictly pure, the organic Red Thread Good we selected was “Dreamy”-flavored, meaning the cold brew concentrate was supposed to have hints of chocolate. Even before tasting, people commented that the color of the concentrate was lighter than the other brews.

The chocolate flavor definitely came through, according to testers. “Sweet, chocolate, caramel and malty,” one tester said. Another liked the “chocolate and woody” flavor. Several people noted the chocolate aftertaste lingered.

If you like to mainline cold brew throughout your work day, Wandering Bear is a great choice because it comes in a handy box outfitted with a tap for easy pouring. This cold brew stays fresh for up to a month — but we’d bet you’ll finish it sooner than that.

Testers liked the light, sweet acid levels and found the flavors to be “herbal, nutty and vanilla.” The flavor tasted “earthy and grassy” to other people, and many commented that this one was the least sweet of the bunch.

“This reminds me of the coffee I grew up drinking,” one tester said, noting the brew had a balanced acidity and a nice subtle caramel sweetness to it. Another person detected nutmeg and cinnamon flavors, and a chocolate and tobacco aftertaste.

This was the only coffee we tried that wasn’t concentrate — so perhaps it had a bit of a leg up on the competition — and it beat out Grady’s by a slim margin. One of Stumptown’s cold brews comes in 10.3-ounce cans. It’s infused with nitrogen, which allegedly imparts a “creamy, stout-like effect,” Esquire reported. Stumptown does offer more standard cold brew (not concentrate or Nitro) but it can be tough to find in retail stores, so we decided to use the Nitro in our test.

Our testers found the Stumptown brew “pleasantly sweet” with a “light bitterness.” One person commented that it was slightly foamy, and lots of people enjoyed the “nutty, chocolate” and “grassy” flavors. “The caramel note is what I look for in a coffee,” one person said. Many people liked that there wasn’t much of an aftertaste.