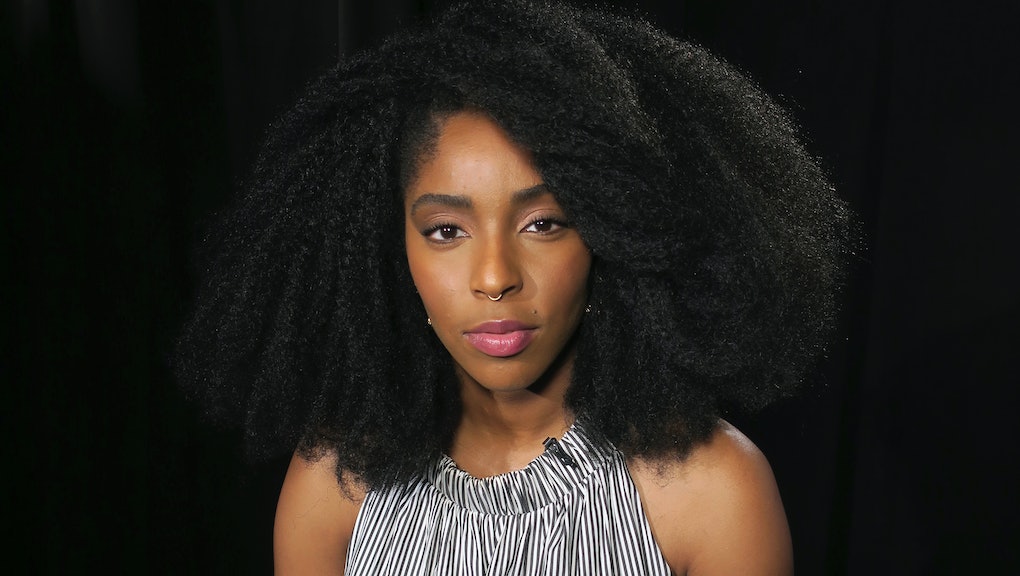 In ‘The Incredible Jessica James,’ the protagonist breaks conventions of a rom-com leading lady

Jessica James is at a bar, on a Tinder date with an incredibly nervous, scruffy guy. He’s trying to follow her lead for the night, but she talks bluntly and constantly, throwing him off his game by saying stuff like she’d rather have her period for 1000 years, nonstop, than continue a conversation with him. Jessica eventually admits she’s only on the date because she’s going through a breakup and her ex comes to this bar every Friday. She hopes he sees her with this new guy and is devastated, when her ex shows up, on a date as well. Jessica reminds him that he broke her heart into a million pieces.

Jessica James has no problems with uncomfortable honesty.

The Incredible Jessica James stars former Daily Show correspondent and 2 Dope Queens podcast host Jessica Williams in the title role as a NYC-based playwright and child theater teacher by day, who is still recovering from a recent breakup. The film itself isn’t particularly groundbreaking, in terms of genre, but it is important, nonetheless, in breaking form for what it means to be a lead in a rom-com. Jessica is not twee, she’s 6 feet tall, which she mentions more than once, with humor and pride. She is a brown-skinned woman, shown with two black parents, and wears her hair in kinky extensions. She is not the “carefree black woman” of the past, fair-skinned or biracial with loose curls that occasionally become dreadlocks, such as Lia Johnson’s character in the indie film I’m Through With White Girls or television characters like Denise Huxtable, Freddie Brooks and Lynn Searcy. James is an artsy black girl, but she’s accessible, messy and relatable.

In indie rom-coms, black women are barely represented, if at all. Celeste & Jesse Forever stars Rashida Jones but Celeste is coded white: All her friends are white, all the men she dates are white, her workplace is largely white. Jessica James has a black ex-boyfriend, has a black family and works with students of color. With The Incredible Jessica James, audiences can see a black woman starring in an indie rom-com that’s both familiar, yet new. Jessica may be the lead character in a romantic comedy but she’s no “adorkable” manic pixie dream girl. She’s confident and focused, sometimes annoyingly so, and holds on to a strong sense of who she is, even when an unexpected chance at love pops up.

The theater provided Jessica solace as she grew up in Ohio, too artsy and quirky for her traditional, middle-class family. She escaped to New York where she became fast friends with aspiring actor Tasha (Noël Wells). The friendship between Jessica and Tasha isn’t groundbreaking either, but notable in its unwavering support without jealousies or drama. Too often onscreen, friendships between women aren’t complete without a major fight or some level of pettiness. That’s not the case between Jessica and Tasha. They’re both young creatives who talk about their successes and failures in their dating and professional lives. Tasha, the ever-supportive bestie, sets Jessica up on a date with app-developer Boone (Chris O’Dowd), to help her get over her recent ex Damon (LaKeith Stanfield).

Boone is handsome and nice but has his own issues letting go of his ex-wife. As any dedicated rom-com viewer could predict, Jessica and Boone grow to have feelings for each other but not without its awkward starts and stops. On their first date, Jessica is way too blunt, telling Boone “No offense, but I don’t even know if I want to be here right now.” But, sticking to the formula, he says something funny, she begrudgingly smiles, and they end up in bed together.

Jessica and Boone’s love is not love at first sight — they help each other navigate post-breakup life, offering to cyber-stalk the other’s ex to save themselves from obsessing over social media updates. It’s all very sweet, but what makes it remarkable is throughout the process, Jessica refuses to be self-deprecating or to make herself small for Boone in any way. During their first date, Boone says Jessica is the complete opposite of his ex-wife. Jessica responds, “What is she? Dumb, short, and fugly?” And much later, when Boone tells Jessica he really likes her, she fires back, “Of course you do. Everybody does. I’m freaking dope.” She is both awkwardly insecure and completely confident in what she is saying.

Jessica breaks the mold of indie rom-com leads because she doesn’t shrug away parts of her personality in order to be some ukulele-playing fairy child floating through life, whatever may come. She has clear goals, is vocal about her passions, and is quite aware that she’s a good catch. Her love life and career aren’t going the way she thinks they should, but she knows it’s not her. She knows her work is good. She knows she’s an attractive, “dope” person. She just can’t figure out why her life isn’t falling in place as it should. It’s a familiar worry for any creative person waiting for a big break or for anyone struggling to make sense of a breakup where, apparently, no one was at fault.

In the end, Jessica receives an important piece of news that requires her to travel to London for a while. Boone offers her the use of his frequent flier miles, in a clear attempt to go with her, but she brings Tasha and one of her students instead. They tease her about her boyfriend buying them tickets, but Jessica shoots down the idea of him being her “bf” Based on her secretive smile, however, it’s clear she really likes Boone.

That’s significant because it shows she can choose a major step in her career and honor her friendship without sacrificing a new relationship. It’s minor, but it’s a nice rewrite to the happily ever after ending we’ve come to love-hate at the end of rom-coms. Instead, Jessica flies off into the sunset with her best friend and one of the students she’s mentored in her theater class. It’s not clear what will come next, but it is clear that it’ll be incredible.