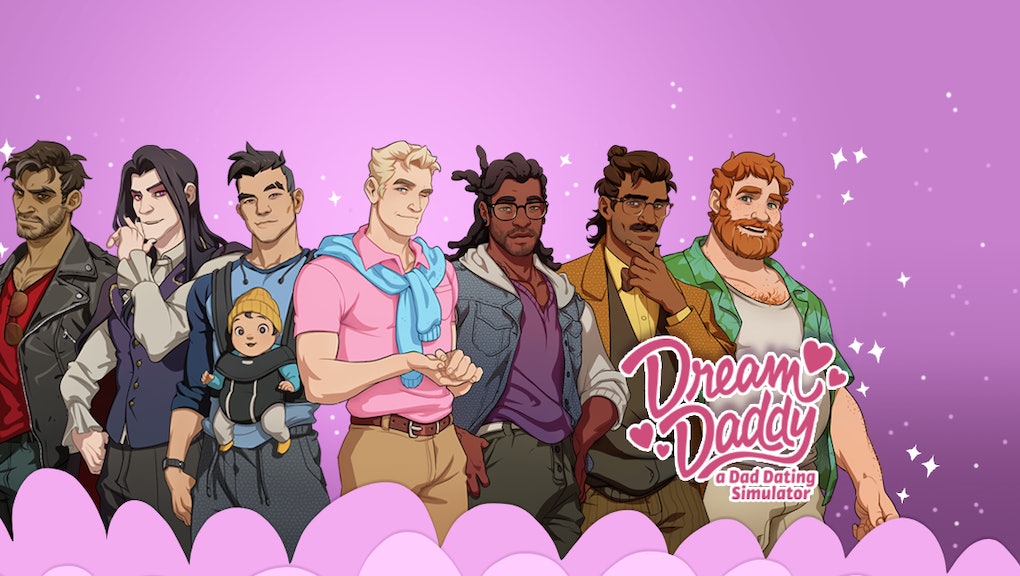 There’s a lot to love about Dream Daddy (the popular new dating sim that lets you date hot dads) including nuanced storytelling and a robust character creator with trans-inclusive body options. But as I replay the game and spend time going after different dads, I’m finding more and more problems that irk me to no end — most notably, how the game handles bisexuality.

I’m a gamer who rarely sees myself represented in games. Finding well-rounded characters of color, women who aren’t window dressing and realistic bisexual characters in video games can be as difficult as hatching a golden chocobo in Final Fantasy VII. So I was sad to find that Joseph, a dateable bi dad in Dream Daddy, plays into the same tired stereotypes we’ve seen before: that bisexual men are sneaky, unfaithful and duplicitous.

I’m a gamer who rarely sees myself represented in games.

There are hints throughout the game that Joseph is bisexual, and the player is left to infer that he’s likely struggling with it because of his faith, his marriage and his devotion to his kids. However, he seems normal enough when he first stops by your new house with a neighborly plate of cookies

Fast forward to your third date with Joseph, and he makes a decisive move to bed you, literally carrying you to his California King. In the heat of the moment. The game doesn’t give you the option to change your mind and say no, though it does warn you ahead of time that third dates can “get pretty serious.” Still, it feels off, especially when Dream Daddy lets you opt out of similar moments mid-date with other characters.

On that fateful date, Joseph confesses that he and his wife Mary are over, claiming the breakup is mutual. He admits that being with you is something he’s wanted for a while. The next morning, everything seems great. Joseph tells you he had a great time and gives you a kiss farewell, but it won’t last.

No matter what you do, though, at the end of the game, Joseph will reveal that he’s staying with his wife. “I have to make this work with Mary,” he says. “I know. I shouldn’t have ... I didn’t mean to hurt you. And I’m really sorry you got caught up in all this. I’ve just felt so lonely lately and I’m not even sure I’m doing the right thing here.”

This seems like an odd way for a storyline in a game about dating dads to end, but in an interview with Kotaku, the game’s creators explained why you can’t wind up with every dad.

“It shouldn’t necessarily be about ‘woo-hoo-ing’ everybody,” said co-creator Vernon Shaw. “Saying exactly what somebody wants to hear until they kiss you is what a sociopath does.”

Still, the decision to make Joseph, the dad who seems to be the most clearly bisexual character in the game, unobtainable speaks for itself.

The decision to make Joseph, the dad who seems to be the most clearly bisexual character in the game, unobtainable speaks for itself.

Mary and Joseph... and Robert

Another interaction in the game backs up this theory. In one story branch, another dad, Robert, will confront you on the dock and warn you to stay away from Joseph.

“I don’t like Joseph,” he says. “I don’t trust Joseph. Joseph is a bad guy and I don’t want him around you. Joseph’s not who you think he is. Ask him about it sometime. Bring it up. And watch your back when you do. Because a guy like that’ll put a knife right in it.”

To be fair, bad boy Robert isn’t exactly the most trustworthy character in the game, but those words suggest the two dads have a bit of history together. So maybe he’s speaking from personal experience when he warns you to stay away.

Interactions with Joseph’s wife, Mary, don’t provide much clarification either. Prior to your third date, she hints that they’re in an open relationship, or at least that she has an understanding about his sexuality. “You aren’t even his type,” she says.

However, in that same conversation, she comments on how you’re just a friend to Joseph — a good, supportive friend, with platonic intentions… right? So either Mary is in denial, or she’s being lied to as well.

It’s important to note that in Dream Daddy, all the dads can be read as bisexual since they all have children via previous relationships with women. So why put such a focus on Joseph? As the only dateable dad in the game in an active relationship with a woman, he’s stands apart as a clear bisexual in a game that never really engages with sexual labels at all. Joseph essentially represents an entire category of people who choose to engage sexually with both men and women at the same time.

Unfortunately, Joseph’s character reinforces the trope that bisexual people are “depraved,” manipulative and morally deficient, like Lee Garner Jr. of Mad Men or the corrupt Frank Underwood of House of Cards. Another stereotype is that bi people are hyper-sexual and unable to be faithful, like Piper from Orange is the new Black, who cheats on her husband with her ex-girlfriend while in jail and offers the excuse, “I like hot people. What can I say? I’m shallow.”

There’s no lack of depraved bisexual characters in games either. Take Volgin and Vamp from the Metal Gear series, with Volgin’s axe to grind with Snake being the murder of his male lover. Or Eddie Low from Grand Theft Auto IV, who murders both boys and girls with glee. He’s an extreme example of the depraved bi trope, since he is also shown to be a pedophile as well as a necrophiliac — thankfully Joseph doesn’t go that far. And then there’s Morinth from Mass Effect 2, who seduces the main character regardless of their gender with intent to kill them.

But there are also plenty of examples of bisexual video game characters who are open about their sexuality. Take Chloe from Life Is Strange, a character who’s clearly interested in women but also openly discusses dating men in the past. Dragon Age II featured almost all bisexual romance options, and the Mass Effect series also features multiple characters that are open to both male and female relationships. Developer BioWare even added a bisexual romance option for Jaal in Mass Effect: Andromeda post-release following an online campaign.

Joseph’s character in Dream Daddy shows us is that video games (and culture in general) still have a long way to go when it comes to good bi representation. Often, bisexuality is played for a joke like on an episode of The Real O’Neals, where being bi was compared to something having webbed toes or worse. Other times, bi representation lapses into the depraved bisexual trope instead of showing the nuances of bisexuality for good or ill.

Joseph’s character in Dream Daddy shows us is that video games still have a long way to go when it comes to bi representation.

I’m sure there are plenty of happy, out bisexual men and dads who don’t sneak around to hide their identity and screw over their male dates. Hopefully the next bi character we see in a video game will be open and happy too — not one who uses the main character for a good time and discards the soon afterward.