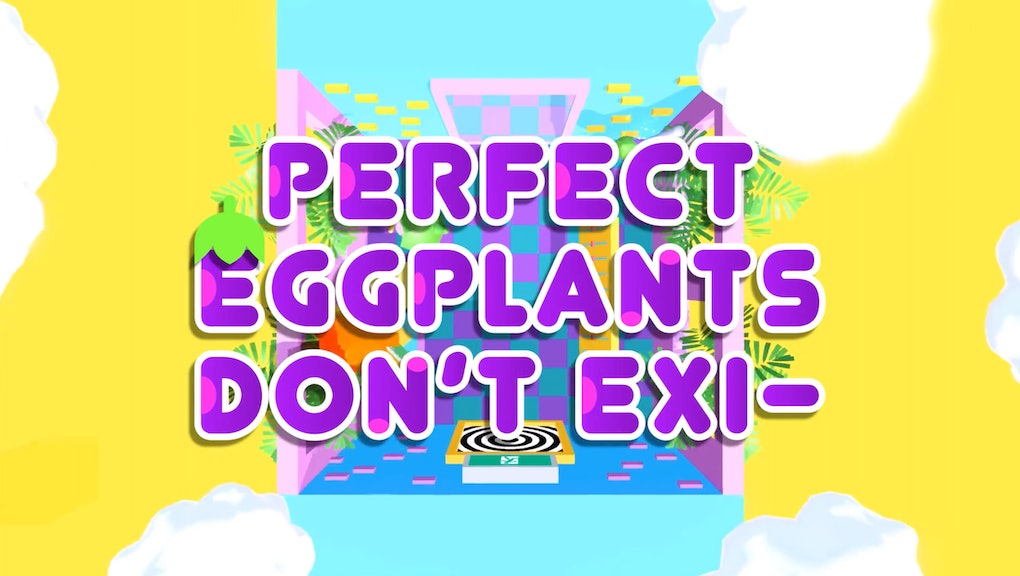 NEW YORK — Imagine that you’ve just met a guy on the gay dating app Grindr and things are going well. Really well. He asks for a picture of you without your shirt on. You stand in front of your mirror, lift your phone to take the shot, and that’s when you see it: A fleshy tummy hanging over your waistband. If only you could wave a magic wand and give yourself rock-hard abs instead, right?

A new virtual reality experience, Perfect Eggplants Don’t Exi-, a title that references the “nobody’s perf-” meme, is all about fulfilling that wish, to give you the power to design the body of your dreams — and then show you that a “perfect” body is actually unattainable. Except, instead of a person, you’re a giant eggplant.

At Wednesday’s Games for Change festival in New York, designer Mikei Huang presented Perfect Eggplants Don’t Exi- in one of the event’s many panels. He explained that it was born out of a desire to critique the harmful, shallow standards by which gay men judge each other online.

“Users [of apps like Grindr and Jack’d] upload images of headless torsos or body parts as representations of themselves and base judgments solely on those pictures,” he said.

As an example of this toxic culture in the gay community, Huang referenced the “no fats, no fems” tagline in Grindr profiles — an abbreviated way of saying that a person’s not interested in plus size or feminine men — that’s become an all-too-common sign that you’re about to engage with a total jerk.

But rather than have players design an ideal human body, Huang used personified eggplants, the emoji for which has become the internet standard for referring to male genitalia. Not only does this imbue the game with a goofy charm, but it also helps to highlight the flimsy, subjective nature of what we consider to be attractive.

Most of us have no trouble identifying attractive humans, but what qualities make a living eggplant more attractive? Do you want it to have big eyes? A bulbous top? A chunky, round middle? It’s not quite as clear — and that’s the point.

For guidance, players of Perfect Eggplants Don’t Exi- have to look toward the in-game social media for answers, where they can see what eggplant shapes are currently trending and alter their body accordingly. As they do so, they’ll receive unsolicited text messages from other people, some of which will be flirtatious — others, not so much.

Huang said his game, which runs on the Oculus Rift headset, is still being refined, but one thing’s for sure: He wants to make sure you can’t actually achieve your goal of designing a flawless, sexy eggplant.

“This is a game that you can never win, and by never winning the game, I want [players] to actually feel good about themselves, [to learn] that it’s okay to not win all the time,” Huang said. “Failure can be something that is fun and enjoyable as well.”