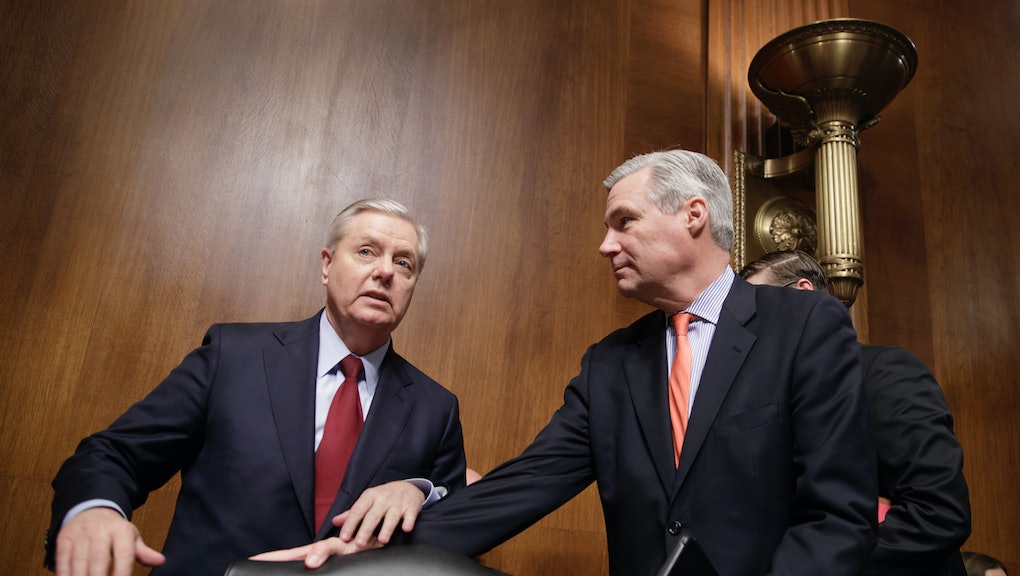 After reports surfaced that the Trump administration is trying to undermine the special investigation into Russia led by Robert Mueller, some Senate Republicans have started coming up with backup plans to keep Mueller’s investigation going.

On Thursday, two bipartisan groups of senators introduced separate bills that would provide court oversight to any attempt to fire a special counsel appointed by the Justice Department.

The first of the two bills introduced by Sen. Thom Tillis (R-N.C.) and Chris Coons (D-Del.) would allow courts to review the firing of a special counsel investigator.

The second bill sponsored by Sen. Lindsey Graham (R-S.C.), Sen. Cory Booker (D-N.J.), Sen. Sheldon Whitehouse (D-R.I.) and Richard Blumenthal (D-Conn.) would force the Justice Department to get approval from the courts before they fired a special counsel investigator.

Also on Thursday, Sen. Jeff Flake (R-Ariz.) suggested to MSNBC that, were Mueller to be fired, Congress should assert its power to hire its own special prosecutor and possibly even hire Mueller himself.

“I think that if he were to be removed, however it’s done by the assistant attorney general or a new one, Congress would assert its prerogatives,” Flake told MSNBC. “That would mean hiring a special prosecutor, and that might even be Bob Mueller.”

On Thursday, the Wall Street Journal reported Mueller had convened a grand jury in Washington for the investigation. Ty Cobb, one of President Donald Trump’s attorney’s on the matter told the Journal: “The White House favors anything that accelerates the conclusion of his work fairly. … The White House is committed to fully cooperating with Mr. Mueller.”

But in July, the Washington Post reported that the Trump White House was examining ways to undermine and possibly end Mueller’s investigation. The administration reportedly discussed laying the groundwork for a potential conflict of interest case to be made against Mueller and his team, based on donations they had made to Democratic candidates in the past and Mueller’s decision to cancel his membership at one of Trump’s golf courses.

Trump is also reportedly considering making a recess appointment to replace Attorney General Jeff Sessions, who recused himself from matters concerning the investigation earlier this year. Such a move would allow Trump to appoint someone with the power to oversee and possibly fire Mueller.

Some Trump partisans in Congress have already begun attacking the investigation.

As of now, it looks like Mueller has no intention of going anywhere except where the facts lead him.