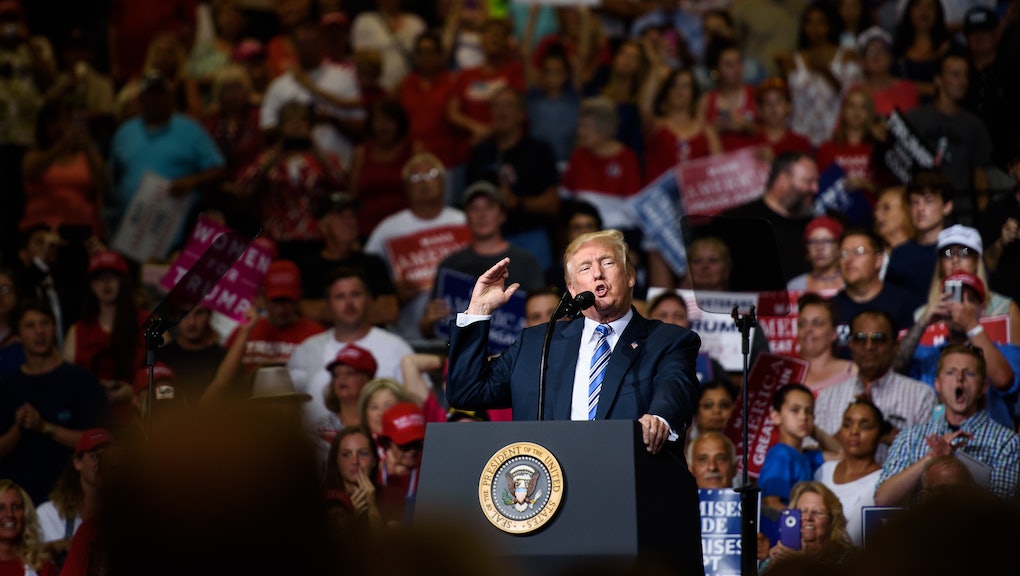 This is Mic’s daily read on Donald Trump’s America. Welcome to the political newsletter that would love to know how committed Jim Justice really was to the Democratic party.

Today: Whatever Mueller finds, Trump’s base will never believe it.

More: As Congress enters recess, Senate leaders do not want to return to health care. But rank-and-file senators aren’t done yet.

Even more: A GOP fight is looming on tax reform and the debt ceiling.

Yes, more: The governor of West Virginia became a Republican.

4 ways Trump leads his supporters to question the Russia investigation

If you’re focused on the outcome of Robert Mueller’s investigation into President Donald Trump and Russia, you’re missing half the story.

The former FBI director leading an independent inquiry into the Trump campaign’s alleged ties to Russia has impaneled another grand jury. This means his probe is growing more serious and expanding in scope. The grand jury has reportedly issued subpoenas about the June 2016 meeting between Donald Trump Jr. and a Russian lawyer. Mueller is also digging into Trump’s finances.

But among the president’s supporters, these developments are nothing but a “witch hunt.” Despite Mueller’s independence and the best efforts of lawmakers to keep congressional inquiries bipartisan, Trump has convinced his base to dismiss any outcome that damages him as a lie. Here’s how.

1. Twitter. Trump frequently bashes the Russia inquiry through his preferred mode of communication. In one example from last month, Trump questioned why he was being investigated and Hillary Clinton’s emails were not.

2. Rallies. “The Russia story is a total fabrication,” Trump told a crowd of supporters Thursday night in Huntington, West Virginia. Trump used the venue to rattle off his greatest hits: That Democrats are fueling a needless Russia inquiry because they have no message; that Clinton should be the one under investigation; and that Russia didn’t influence the 2016 presidential election.

3. Conservative media. Television and online media friendly to the president have for months questioned the Russia investigation. Breitbart trumpeted Trump mocking Democrats at his rally. Fox News focused elsewhere, leading its website on Friday with news of the 70 Trump nominees passed through the Senate this week.

These tactics work. Trump’s overall approval rating is historically low — but even as his base support slips, a vast majority of Republicans are still with him. And in a recent CNN poll, 79% of Republicans said they were “not at all” or “not too” concerned with the Russia investigation. Among Democrats, the number flips: 79% were “very” to “somewhat” concerned.

Of note: Bipartisan groups of senators are trying to block Trump from firing Mueller.

Congress has recessed — without repealing Obamacare, cutting taxes or funding the border wall. (They promised to do all that in the first 200 days.) Conservative senators still want to repeal the Affordable Care Act while moderates are seeking a bipartisan fix. Senate Majority Leader Mitch McConnell (R-Ky.) just wants to move on.

Congress left town with a 10% approval rating. That was driven by a 22-point drop in support of Congress among Republicans between March and August. Republicans will face voters at home angry about health care and mobilized to oppose their tax reform plan.

When the House and Senate return in early September, they’ll start work on tax reform, which House Speaker Paul Ryan (R-Wis.) promises will be easier.

But a fight is looming over raising the debt ceiling by the end of September. Republican leaders want to pass that increase without spending cuts, a move that may anger conservatives.

Gov. Jim Justice of West Virginia announced Thursday night that he was becoming a Republican. He said at Trump’s rally in Huntington, West Virginia that “The Democrats walked away from me.” The GOP now has a record 34 governorships and complete control of state government in 26 states.

Chief of staff John Kelly used to regularly complain about the White House’s dysfunction. Now, in his first week on the job, Kelly is forcefully reshaping how the executive branch operates.

The New York Times surveys the major changes at the Justice Department under Attorney General Jeff Sessions. They are numerous.

5 of the most damning quotes from Trump’s conversations with the leaders of Mexico and Australia.