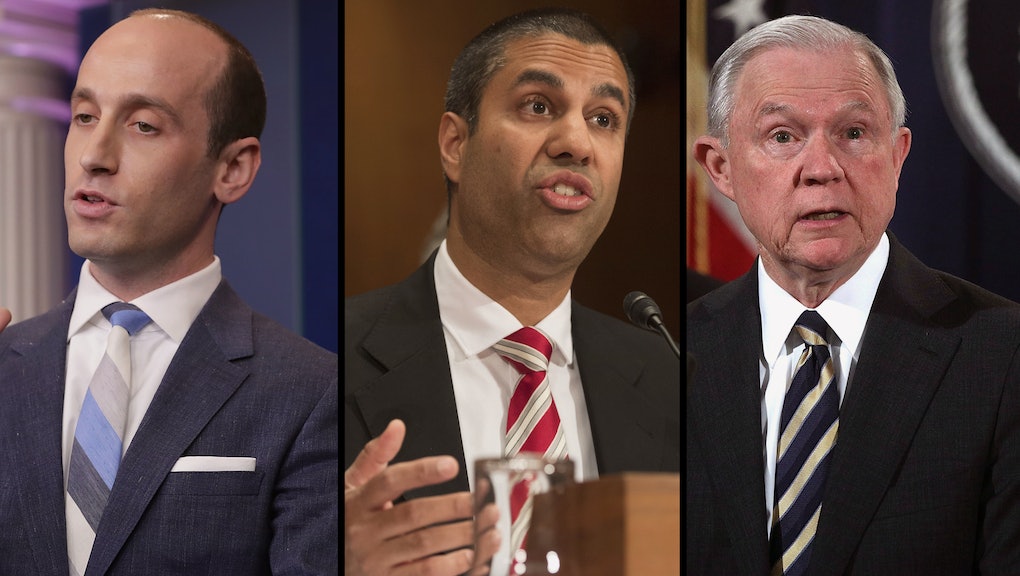 While You Weren’t Looking: 5 big stories that aren’t about “dumps” or “drug-infested dens”

A news week that began relatively slow for President Donald Trump and his administration picked up rapidly after transcripts of Trump’s conversations with foreign leaders leaked to the press and reports surfaced that special counsel Robert Mueller had impaneled a grand jury for his probe into the president’s ties to Russia.

Still, all week long, major policy decisions were being made in Congress and across the federal bureaucracy. Here are five big policy stories you might have missed.

On Wednesday the Senate confirmed one of two Trump appointees to sit on the National Labor Relations Board, the federal organization that oversees labor disputes in the United States.

Trump’s appointment of former congressional staffer Marvin Kaplan has worried labor groups who think the new appointee could shift the NLRB toward siding with business interests over those of organized labor. Kaplan has little experience in labor law but has played a role in drafting legislation that makes it easier for employers to fight unionization efforts.

Trump’s second appointee to the NLRB, William Emanuel, has also drawn concerns from pro-labor interests. He is expected to be confirmed soon.

The New York Times reported earlier this week that the U.S. Department of Justice is seeking to hire attorneys to take on college affirmative action policies. According to the New York Times, the administration is motivated by a desire to combat discrimination against white applicants to public colleges and universities.

Affirmative action policies are designed to increase diversity on college campuses and combat the exclusion of minority applicants from tertiary education. Conservatives have long felt that such programs provide unfair preferential treatment to minority applicants against the interests of white students.

In a policy announcement largely overshadowed by the combative behavior of Trump adviser Stephen Miller, the administration made a dramatic change to U.S. legal immigration policy.

Trump endorsed a plan introduced by two Republican senators that would halve the number of people allowed to legally immigrate to the United States. In addition, the policy would change the United States’ family-based immigration system to one that focuses on things like English proficiency, job offers and career record.

Two bipartisan groups of senators introduced legislation this week to try and create a backup plans, in the event the Trump administration attempts to fire special counsel Robert Mueller.

One bill, introduced by Sens. Thom Tillis (R-N.C.) and Chris Coons (D-Del.), would allow Mueller to challenge his removal in federal court, should it happen.

The other bill, sponsored by Sens. Lindsey Graham (R-S.C.), Cory Booker (D-N.J.), Sheldon Whitehouse (D-R.I.) and Richard Blumenthal (D-Conn.), would go even further by forcing the Justice Department to seek approval from the courts before firing Mueller.

Also this week, the Senate moved to confirm two new members to the Federal Communications Commission as the commission moves closer to rolling back Obama-era net neutrality protections.

A group of Democrats led by Sen. Ed Markey (D-Mass.) sent a letter to FCC Chair Ajit Pai asking him to extend the public comment period for the FCC’s proposed change in net neutrality policy.

“This volume of comments underscores the tremendous interest the public has in this proceeding,” the letter reads. Since the public comment period began the FCC has been inundated with responses from concerned citizens asking the FCC to maintain net neutrality protections. When the protections initially went into place, the FCC allowed 60 days of public comment. Pai has only allocated 30 days for comment on the proposed rollback.