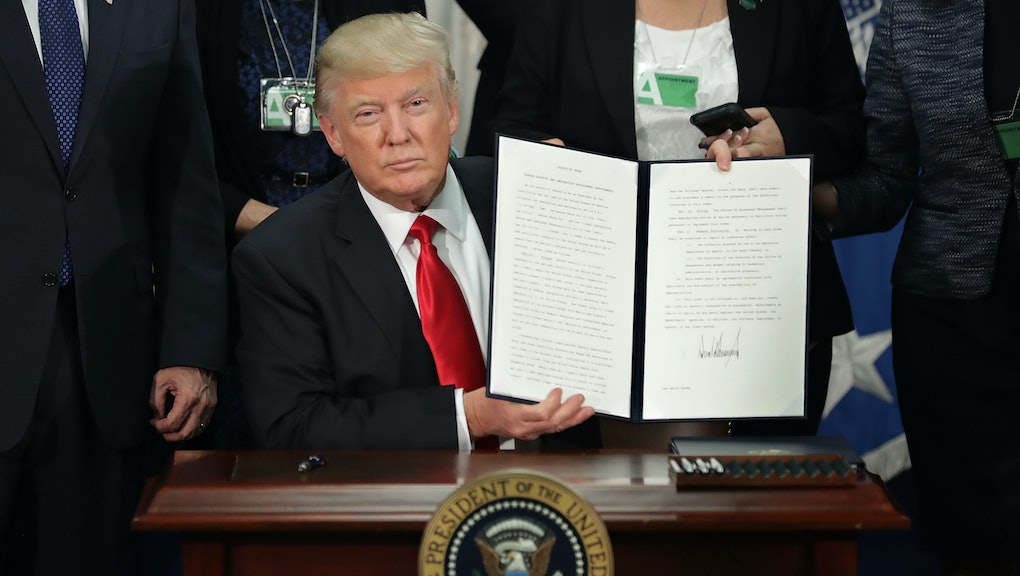 Trump is trying to fast-track part of his border wall. Here’s what that could mean for wildlife.

The Department of Homeland Security this week will waive dozens of environmental regulations to speed up the first phase of construction on President Donald Trump’s border wall, the department announced in a statement earlier this week.

The administration will bypass 37 environmental, natural resource and land management laws in an effort to fast-track construction on a 15-mile stretch of the border near San Diego — a purported hotspot of border crossings.

“While the waiver eliminates DHS’s obligation to comply with various laws with respect to covered projects,” according to a statement from the DHS, “the Department remains committed to environmental stewardship with respect to these projects.”

But for experts and environmental groups, the waiver is yet another example of the indifference to the environment that the Trump administration has displayed as it attempts to fulfill the president’s signature campaign promise: build a massive wall along the United States-Mexico border.

“I think it’s a willful disregard of the environmental impacts of the wall,” Brian Segee — a senior attorney for the Center for Biological Diversity’s Endangered Species Program — said in a phone interview. “If the government isn’t looking for environmental impacts, it’s not going to be able to identify and avoid them.”

How will Trump’s border wall affect the environment?

The Trump administration is moving forward on the controversial wall — which he has long argued is necessary to keep out “bad hombres” and stop the flow of illegal drugs into the U.S. — despite failing to release an impact study on the environmental consequences of the massive infrastructure project.

The Center for Biological Diversity — along with Rep. Raúl Grijalva (D-Ariz.) — sued the administration in May to halt the project until the government completes an environmental impact study, and in June filed a notice of intent to sue the DHS and border patrol “over threats to endangered species and critical habitat.”

“The lack of information and the lack of public transparency has definitely been ratcheted up a few notches under the Trump administration,” Segee said.

According to Jesse Lasky, an assistant professor of biology at Penn State University, the full extent of the potential damage the proposed border wall could do is unclear without such a study available — but he says that the project would likely pose both short- and long-term problems for wildlife and natural habitats along the border.

“These are biodiverse regions with many species,” Lasky said in a phone interview. “There’s a pretty big gap in knowledge there about the impact of [barrier walls].”

A major issue, Lasky said, is that the proposed wall could curb the movement of animals in the region, which means that “populations that haunt the border would likely be reduced.”

Cutting off movement could curb animals’ ability to seek food, water and mates, hinder the genetic diversity that allows them to adapt to new environments and prevent populations from “refounding” in new areas if they face perils such as disease or flooding, according to Lasky.

That the administration plans to go ahead with the wall anyway, Segee said, sends a signal that “the environment, the natural resources — that none of this matters, when of course all of this does.”

The waiver issued by the DHS this week — which was also used by the Bush administration to construct border fences between 2005 and 2008 — would expedite the construction of barriers from the Pacific Ocean to Border Monument 251, about 15 miles east, according to the department’s statement.

That’s an area that’s home to a number of endangered species, such as the quino checkerspot butterfly, Segee said. Barriers in that stretch of land could restrict their flight, as well as that of migratory birds.

“[The area] is a good example of the environmental resources that are at stake along the whole border,” Segee said. “It’s a common misconception that the borderlands area is sort of barren and a wasteland, but it does have very high environmental value.”

In a statement Wednesday, Grijalva condemned the administration’s plan to skirt environmental regulations, calling the rules “monumental protections that have been essential to preserving our country’s natural heritage and safeguarding public health.”

“Doing away with environmental and public health laws that ensure clean air and clean water jeopardizes the very people, values and homeland that DHS claims to protect,” Grijalva said.

“As I’ve said repeatedly, Trump’s wall — and his fanatical approach to our southern border — will do little more than perpetuate human suffering while irrevocably damaging our public lands and the wildlife that depend on them,” Grijalva added.