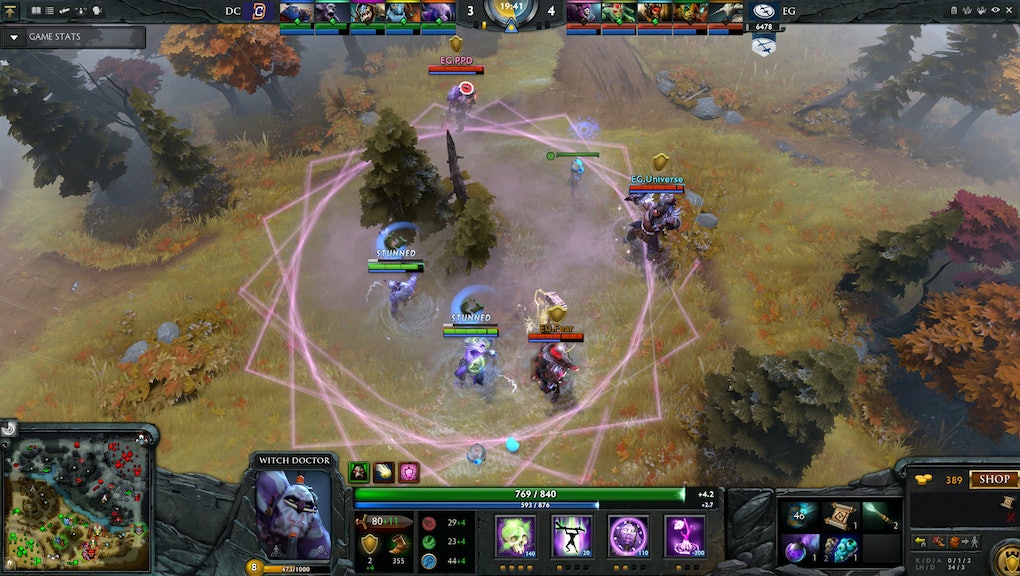 ‘Dota 2’ International Documentary Review: TBS esports show is fascinating, but not a success

Competitive gaming on TV is fairly charted territory at this point, with ESPN airing things like Heroes of the Storm and Super Smash Bros. in the past couple of years. Though I have qualms with presenting esports with the same trappings as physical sports (that’s another article entirely), we know it can at least be done with some level of competence.

Now that we’re just about in the throes of Dota 2’s annual The International tournament, TBS is riding the wave with Road to The International Dota 2 Championships. The matter-of-factly titled documentary series is airing in four parts at 10 p.m. Eastern every Friday in August. I’ve seen an early screener of tonight’s debut episode, and though I think it’s worth watching as a curiosity, I’m not sure this is the right way to document the human side of esports.

Road to the International follows two professional Dota 2 teams on their journeys to TI 2017. The first team, OG, is framed as the best of the best; these guys are the favorites to win it all and they’re confident in their abilities. However, this episode is largely about team comPlexity Gaming — the underdogs who have to win the grueling North American TI qualifier just to make it to the big competition in Seattle.

The first half of the episode is actually fairly strong, in an “I can’t believe they made this for TV” sort of way. We’re introduced to the individual members of both teams whose lower thirds emphasize their dumb gamer usernames in a font that’s about four times bigger than the font used for their real names. That’s been jarring to me every time I’ve seen esports on TV and I can’t imagine how people who don’t closely follow video games feel about it.

Something you might not know about Dota 2 at its highest level is these teams live together in houses to prepare for the tournament. A great deal of the first episode of Road to the International is basically a gamer version of MTV Cribs, which I found absolutely captivating. comPlexity Gaming lives in a five bedroom pleasure citadel on the Florida waterfront, complete with a team chef and a very good cat. It’s deeply funny to me that these guys live in literal paradise for the sole purpose of sitting indoors and playing Dota 2 together.

I once spent most of a Hawaii vacation playing Chrono Trigger so I’m allowed to say that.

OG, meanwhile, lives in a more modest (but still richer than my blood) house in suburban Toronto. Their team manager Evany Chang, is the only woman to get any screen time in the episode, which amounts to about two minutes at most. She seems pretty rad, and though she alludes to being like a team mom set to b-roll of her wrangling the boys together for a trip, there isn’t nearly enough of her.

That feeds into my main criticism of episode one, which is that its strengths lie in its presentation of the pro Dota 2 lifestyle, while its depiction of actual Dota 2 competition is incredibly weak. I really think the first episode of a four part series would have been better served being entirely about the lifestyle, but instead, the second half of the episode shows us comPlexity Gaming’s trip through the qualifying round.

I’m not inherently against including this in the first episode, but Dota 2 is a difficult game to show to people who haven’t played it before. Road to the International mostly shows a few seconds of zoomed in, HUD-less action cut between shots of dudes tensely staring at computer monitors. It’s a completely worthless way of showing the action in a show that I think, if done right, could provide some valuable context to newcomers.

Though the particulars of Dota 2 are endlessly complex, it can be summed up quickly, which the show never really tries to do. I’ll try here: In Dota 2, two teams of five compete across three symmetrical lanes to destroy guard towers and, eventually, destroy the opposing base on the opposite side of the map. I really think a quick primer with nice motion graphics would have worked wonders somewhere in the episode, if it’s going to focus so much on the qualifying round.

Ultimately, the first episode of Road to the International is simultaneously promising and frustrating. I’m a huge fan of sports documentaries like 30 for 30, and I think there’s some potential here in giving viewers a human element to latch onto. I’m not particularly attached to any of the people in the episode, but from a distance I found it super amusing to see a bunch of pro gamers take a boat trip together on national television.

I just don’t think they can get away with showing Dota 2 highlights without any additional context for the layman, though. A football documentary can do that because it’s safe to assume anyone who casually tunes in has some idea of how football works. It’s much more of a cultural force within TBS’s purview than Dota 2. I think this episode would have been better served diving even deeper into the day-to-day lives of these players, along with some base-level explanations of how Dota 2 works.

If the show is strictly intended for people who already care about Dota 2, that’s fine, I guess. I just don’t know if that should be the way going forward with esports on television because there’s so much ground to cover. I recommend checking out the first episode of Road to the International because there’s something novel about its existence. But I wouldn’t call it great.