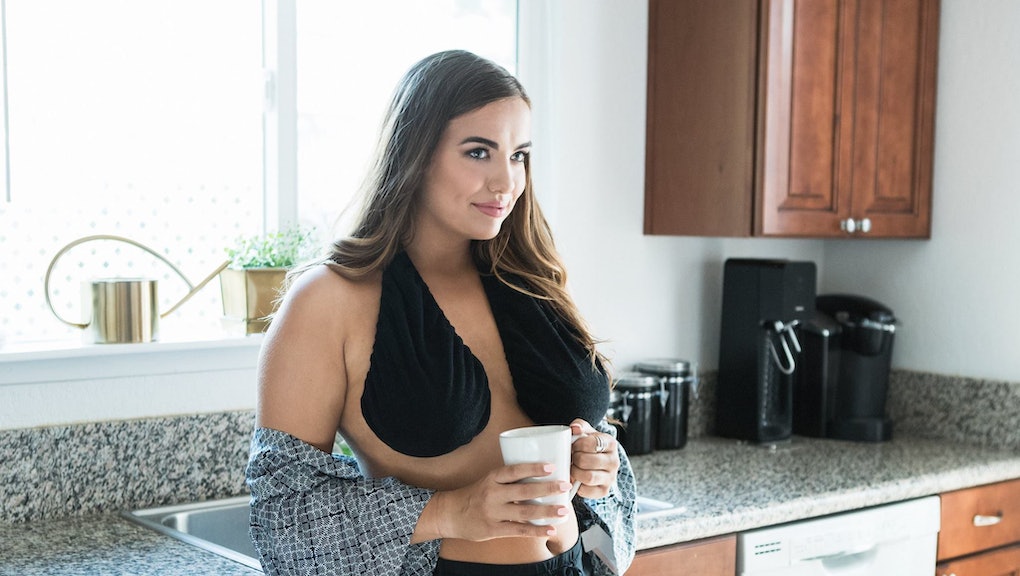 Would you wear this terry cloth boob sling?

When moving through your daily motions — getting ready in the morning, drinking that first cup of coffee, watering the plants, chopping vegetables — do you find yourself derailed by boob sweat? Do you sometimes wish you could just holster them in some sort of suspension harness and get on with your life?

If the answer to either or both is yes, Erin Robertson, creator of the Ta-Ta Towel, has excellent news for you.

While primping for a date one night, Robertson found herself fighting an uphill battle against a broken air conditioner and summer heat. Drying her hair left her underboob area drenched in sweat. “There has to be a better way,” she thought (according to her website), and thus the Ta-Ta Towel was born.

The Ta-Ta Towel is a nipple-friendly, rayon-lined terry cloth halter bra that reportedly keeps breast skin away from torso skin, allowing the wearer’s bosom to breathe. Available in sizes C to H and a bevy of cheeky prints, the Ta-Ta Towel has garnered enthusiastic praise from users for its comfort, its convenience and its suitability for breastfeeding.

But asked “would you wear this ta-ta towel, why or why not” in an informal poll, Mic ladies raised questions.

“I’m not totally clear on under what circumstances you’re supposed to wear it,” Marie Solis, a writer, said.

“Imagine getting a Seamless delivery while wearing this,” Rachel Lubitz, another writer, noted.

“Wait, is this serious breathable moisture-wicking material? Because that looks like a fleece titty sling from here,” Megan Carpentier, an editor, asked.

“Does it work when you stand up?” Stephanie Wu, also an editor, wondered. “Is there adhesive?”

The adhesive question came up a lot, but because Ta-Ta Towels had not responded to Mic’s request for comment before publication, we can’t say for sure whether or not this sling sticks to the breast. Based on an instructional video, however, it looks like the Ta-Ta Towel can be tightened via an internal elastic cord that toggles at the neck. The user situates the ladies in their cups, then lifts them up and away, the terry cloth trapping sweat so it doesn’t trickle down the stomach.

As for when one wears it, the answer is: whenever! So long as it’s a place you’re comfortable being mostly topless. Drinking tea on the couch seems a perfect Ta-Ta Towel activity:

Getting ready in a humid, post-shower bathroom:

Or just tidying up at the sink:

“My plants are dead and I have a dishwasher, so (along with my being a B cup) I don’t think this product is for me,” said Marie, still not sold.

“If you can’t wear it under your clothing, isn’t it just a boob robe?” Julia asked.

Once the concept had been explained, informal survey participants seemed more amenable to the concept — because boob sweat is an incredible nuisance. After a swim, a product that can ventilate the hard-to-dry underboob could be quite useful, Megan pointed out, but potential for design flaws seemed perilously high.

“I’d rather be naked,” Jenny said. “Pat ‘em dry with a regular towel.”

And you, reader? Would you wear this boob towel, yes or no?