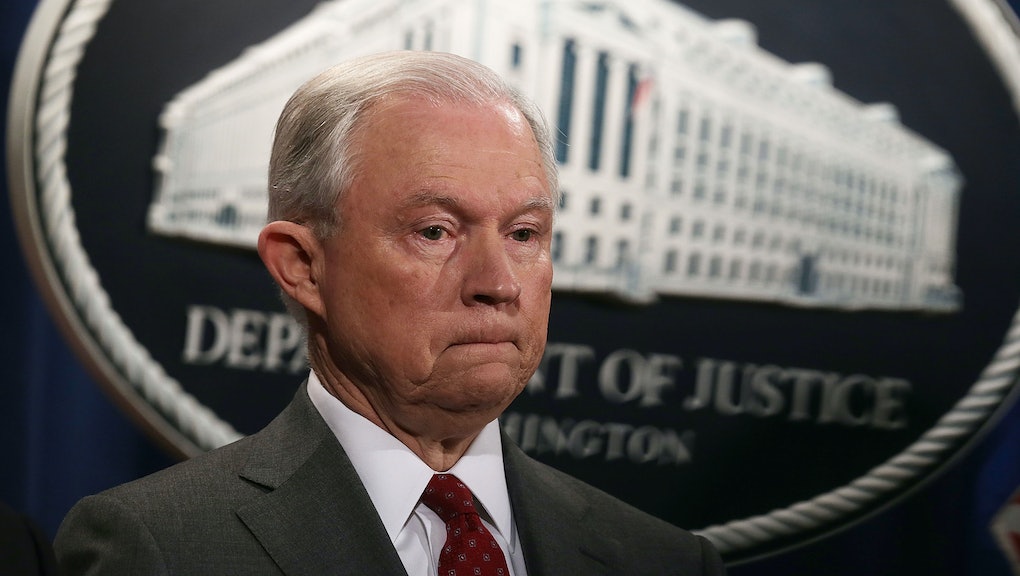 Attorney General Jeff Sessions announced Friday that the Department of Justice was considering changing the rules that govern when and why the department can subpoena a journalist.

“We respect the important role that the press plays, and we’ll give them respect, but it is not unlimited,” Sessions said at a press conference, during which he said the possible rules change was part of a number of steps the department was taking to crack down on government leakers. “They cannot place lives at risk with impunity. We must balance the press’ role with protecting our national security and the lives of those who serve in the intelligence community, the armed forces and all law-abiding Americans.”

The remarks, after which Sessions answered no questions, lacked additional details, and a press person for the Department of Justice did not respond to a request for more information about the possible rule change. But Sessions’ announcement was nonetheless deeply alarming to many press freedom groups and advocates, who just two years ago celebrated a rewriting of the rules guiding how the government handles media subpoenas.

First written in 1970 and amended a handful of times over the decades, those ruled are not legally binding, but they have provided a framework Justice Department officials generally rely on to determine how they should handle approaching certain cases, according to Reporters Committee for Freedom of the Press executive director Bruce Brown. The rules require that prosecutors exhaust their other options to collect information before subpoenaing a journalist, and require the attorney general to sign off on such a subpoena.

The guidelines were amended substantially in 2015, after press freedom groups objected to outdated rules during the Obama administration’s unprecedented prosecution of government leakers. The amended guidelines laid out how the Justice Department should conduct and review legal demands for journalistic records and communications like phone records. The rules also said that the Justice Department, if seeking to obtain certain records, needed to provide advance notice to news organizations.

What the guidelines have historically tried to do is to balance the Justice Department’s interests with the interests of the First Amendment, Brown said in a phone interview Friday.

The Reporters Committee had anticipated Sessions’ position on government leakers and on source protection, mainly because of his record in the Senate opposing federal shield laws — which protect journalists from being compelled to reveal confidential sources — and because of his support of tactics that could make it easier to surveil journalists. What concerned Brown the most was the way Sessions suggested that journalists put people’s lives at risk.

“It is deeply disturbing to frame it the way he did because of the way it perpetuates a narrative about journalists being the enemy of the people,” Brown said.

Brown and Reporters Committee chairman David Boardman issued statements following Sessions’ remarks expressing their concern, but the Reporters Committee was not the only press advocacy group to raise the alarm. In a statement issued moments after Sessions’ comments, the American Civil Liberties Union’s Speech, Privacy and Technology Project director Ben Wizner said that leaks are an important part of democracy, and that citizens cannot rely on government channels for all their information.

“Every American should be concerned about the Trump administration’s threat to step up its efforts against whistleblowers and journalists,” Wizner said in the statement. “A crackdown on leaks is a crackdown on the free press and on democracy as a whole.”

Alex Ellerbeck, the senior Americans and U.S. researcher at the Committee to Protect Journalists, said in a statement that the announcement “would lessen the public’s ability to hold their elected leaders to account.”

President Donald Trump’s administration has been openly hostile to the press since even before Trump took office, and calls for crackdowns on government leakers have intensified among the Trump administration. Last week, then-communications director Anthony Scaramucci said in an expletive-laced interview that he wanted to “fucking kill all the leakers.”

In January, Sessions said he was “not sure” whether he would prosecute journalists. On Friday, Sessions again refused to answer that question when it was posed, instead leaving the room.

Brown said that, all else aside, it was noteworthy that Sessions at least did not suggest that he would try to prosecute journalists under the Espionage Act — a controversial law that has been used to charge whistleblowers like Edward Snowden. (Reality Winner, who was accused of leaking an NSA report to the media, is also facing charges under the Espionage Act.)

“The fact that the DOJ today did not in any way suggest that they were looking at direct prosecution of reporters under the act was something,” Brown said. “We at least can take away feeling that they were not coming up to the reddest of the red lines.”

“But short of that,” he added, “the rhetoric, and the obvious threat to source protection is potentially going to have a real impact on the willingness of sources to come forward. …You will see people bracing for a rough ride.”